It's time for more Bookshelf Traveling in Insane Times which is hosted by Judith at Reader in the Wilderness.  The idea is to share your bookshelves with friends as a form of armchair travel. 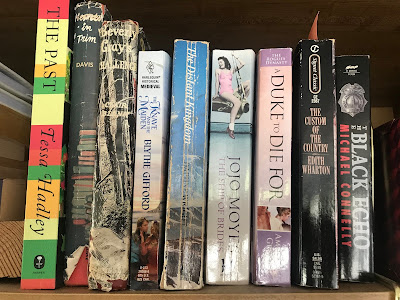 These are from the top shelf of a cabinet where I tend to stick things I want to read but temporarily forget about them.  It also holds my stereo and the coffee maker I keep for guests.  You can see there is no real theme.   It is an eclectic group:
One children’s book
One work of contemporary fiction
One mystery
One classic
Two historical romances
Two historical novels
One YA

My sister and father had been raving about Michael Connelly’s books for years so I think I picked up a copy of The Black Echo long before I started reading the Harry Bosch books in 2012.  I have become quite devoted to Harry Bosch, the maverick LAPD detective.  I like the way he fiercely defends those who have no voice; his career is dedicated to deceased victims.   I do think it’s funny, however, that this gruff and rough guy seemed to be very attractive to women.  Maybe this is wish fulfillment for his male readers?

Tessa Hadley is an author I have heard a lot about lately, so I need to move this higher on my TBR and perhaps consider it for my book group.   The Past's description appealed to me because it’s about four siblings, three sisters and a brother, which is the composition of my family.  They are spending three weeks in the family home in the English countryside while they decide whether it must be sold because the upkeep is so expensive.  Not surprisingly, hidden secrets, unexpected passions, and family rivalries erupt to disturb the seemingly idyllic vacation.  Don't you hate when that happens? 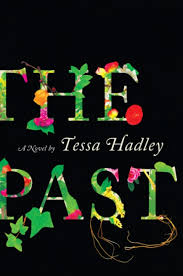 The Ship of Brides is an early JoJo Moyes based on a true story about 650 Australian women who married soldiers during WWII and then traveled together to England to be reunited with their men.   I listened to this on audio as I drove back and forth to Cape Cod and although it started very slow I was eventually so affected by the backstory of the nurse I became tearful.

I don’t remember reading The Knave and the Maiden by Blythe Gifford but I know I ordered it because she is a Betsy-Tacy fan and I like to support writers inspired by Maud Hart Lovelace.

Beverly Gray is a series I never came across growing up but when I heard a close friend enjoyed them as a child, I started coming across them and presenting them on her birthday.   She recently tried to give them all back to me!  I told her she should save them for her grandchildren and to look instead for the copy of Betsy in Spite of Herself that I lent her when her daughter was in high school (that daughter graduated from Notre Dame last week!).  You know what Polonius would say. . .
The Custom of the Country is the first Edith Wharton I ever completed.  My book group read it in May.  We sometimes talk about visiting the Mount but have never actually made the 90-minute trip.

Hearts in Trim is by Lavinia R. Davis (1954), an author my mother read as a teen.  The cover is delightful, isn’t it?

Serena Bruce, commonly known as Squeak, was startled and pleased when she learned that old Mrs. Frostgate had left her a legacy.  Pleased, because the legacy consisted of the books both she and Mrs. Frostgate had loved.  Startled, because the other “heir” was one Cliff Hawks, an impish redhead who had been teasing Squeak since she was five years old.  A compromise, based on fond memories of Mrs. Frostgate, was effected, however, and the two of them began organizing the books for selling while they tried to untangle the mystery of Clare Clayton, the glamorous actress who had settled in the village. 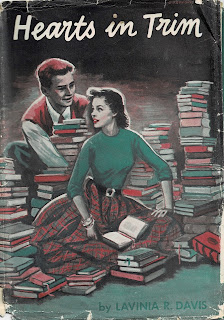 Here is a book sure to delight teenage girls, by the author of the popular A Sea Between [my mother’s copy is upstairs, I think].  It has the exciting festivity of a wedding, all the fun of skiing, and a humming family life, and more than a touch of romance.   [Does your family hum?]

The book has a bookplate for Sandra Phair Mundy.  The name is so unusual I just googled it and found a lovely tribute from the Rhode Island legislature in 2015 on the occasion of Ms. Mundy’s retirement as librarian in Burrilville, RI (population 16,000)!  She spent almost 45 years as a librarian in this community and was highly valued.   Maybe I should reunite her with her book – but not until I have had a chance to read it, obviously!

After writing this, I realized I am acquainted with Ms. Mundy from Goodreads although I didn't know her full name, and now recall she very kindly sent me this book after I saw her post about it.  Now I feel silly - no wonder it all seemed familiar!  This was a hectic week with performance evaluations to write for work and an RFP, and I know I am not getting enough sleep!

Staring at this messy cabinet and its contents makes me really want to tidy up this room.  The feeling is strongest during the day when I am very busy and wears off as the humidity increases (77% at present) or at night when I am free and would rather read.  Currently, I am spending way too many hours here behind my laptop, all day for work and then at night when I should be more productive.  One of the first things I will do once Massachusetts reopens is replace the cushions on the window seat where I am ensconced and make them twice as thick!

Nice selection of books, I love how varied they are. I've read a few Edith Whartons and loved them but not The Custom of the Country. I imagine it's worth a read?

My husband's a big Michael Connelly fan but I haven't read any. We tried the TV series but neither of us were that keen.

You're on Goodreads? I wonder if there's any way I can find you.

I've written down The Past and Before She Was Helen. I remember reading Custom of the Country after my sister and I had been to see Age of Innocence when it came out and I began devouring Wharton's books.

I put out a stack of classic children's books that I still had left after giving most of them to grandchildren and read The Railway Children last week, hoping my almost 8 year old granddaughter who loves chapter books will be interested in it. Next is The Summer Book, if I have that name right, the author of the Moomin books. Can't remember if I ever read it to my children but dearly loved it myself.

Your schedule sounds loaded! Even working from home, or is that even more hectic than not working at home?

I absolutely loved The Past by Tessa Hadley, and have recommended it to many others. I think it's my favorite of the books I've read by her. I liked how the house was as much a character as the family residing in it. Very memorable as well, always a sign of a wonderful book. I also liked the one that has "Train" in the title. That novel, too, is most memorable.
My husband, too, is a big Michael Connelly fan. He's currently reading his debut novel, The Poet, which he says is fantastic. Newly republished, with a forward by Stephen King.

I have only read 2 of the Bosch series by Michael Connelly, but I have several more on my TBR piles. We have watched all the seasons of Bosch on Prime except the last, and liked them, but they are very gritty and violent.

I do love that cover for Hearts in Trim.

I haven't read any of those books, the only author I've read from your shelf is Wharton. I also love that Hearts in Trim cover, it's so of its time.