Myself When Young by Daphne du Maurier #DDMreadingweek 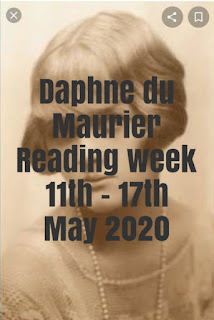 Plot: You probably know her as the author of Rebecca but du Maurier (1907 – 1989) wrote several other bestselling books that are equally memorable.  She came from a talented artistic family.  Her father was a famous actor, Sir Gerald du Maurier and her mother, Muriel Beaumont, an actress who met him in a play. Her grandfather was a well-known cartoonist for Punch, a popular humor magazine, and writer, French-born George du Maurier. He is best known for creating the character Svengali that became a catch-phrase for a coercive influence on someone.  Daphne was educated primarily at home before being “finished” in France, in the kind of family that summoned the children to say hello to guests briefly before sending them to the nursery with Nanny. Although not part of the nobility, the du Mauriers clearly mixed with all the right people due to Sir Gerald’s prominence.  Her upbringing seems fairly typical for an upper-middle-class British family but the drive and passion that developed in this shy young woman was all Daphne’s own. 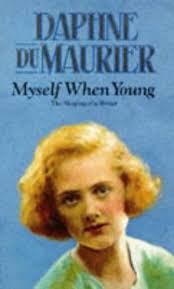 My Impressions: This is a slight book based on the author’s recollections and the exhaustive diaries she kept from 1920 when she was 12 until she married in 1932, but covers a lot of territory.  To me, the two most interesting things about Daphne were that with little traditional education she became a writer of amazing imagination and wide scope and her incredible passion for Cornwall.  She reflects on both in this memoir:


‘Daphne,’ announced Miss Druce after a short story competition in the class [about 2017], ‘has written the best short story but . . .’ she paused, ‘but with the worst handwriting and the worst spelling.’

She writes about being entranced by a childhood visit to a great home, Milton, in Peterborough.   She reveals that Milton and Menabilly, the house in Cornwall she first loved from a distance and then moved into with her husband years later, inspired Manderley.  When the du Mauriers decided to purchase a holiday home in Cornwall, Daphne is immediately enamored of the area and feels at home.  She makes excuses to stay behind and write when her parents and sisters go back to London.  Later, she and her sister Angela discover Menabilly, a house with a three-mile-long driveway.

‘But the house,’ I said with longing, ‘we haven’t seen the house.’

The following day we . . . walked acoss the park and through another gate, and came to the house. Grey, still, silent. . . But with all her faults she had a grace and charm that made me hers upon the instant.  She was, or so it seemed to me, bathed in a strange mystery.  She held a secret – not one, not two, but many – that she withheld from most people but would give to one who loved her well.

Daphne does not seem to have been religious – her religion was Cornwall, so it is interesting that her aunt’s delight in having visited the Passion Play and Oberammergau made a strong impression on her.   Betsy-Tacy fans will remember that Betsy Ray also visited Oberammergau in 1914 and met Anton Lang:


There were several men in the shop, but Betsy recognized the Christus before he put down his tools and turned to greet them.

Back home, the pictures of this large bearded man had aroused in her a slight unreasonable resentment.  It had seemed presumptuous in any human being to appear in the role of Jesus.  This feeling melted before his warm unaffected smile.

He was slightly stooped, and wore work clothes, dusty from his craft.  He had flowing light brown hair and beard, and a strong face with keen, humorous, light-blue eyes.  His stoop was humble but his whole manner expressed a simple natural dignity.

Betsy and the Great World

Obviously, Daphne’s family connections help her get essays published before she starts writing books but she is genuinely independent and soon establishes herself as a writer.  She could easily have lived with her family in London and got some type of editing job and socialized at night but she rejects that life to live at least part of the year in Cornwall where she enjoys being on the water as well as her solitary writing.

Daphne is not stage-struck or even interested in acting so it is surprising when she is invited to audition for the lead in The Constant Nymph.  In a different kind of book, this would result in getting the part and imminent stardom.  I liked instead that she felt she did poorly and forgot about it.  Then it turns out a year later that her father and Ivor Novello found it quite good and talked of her doing a film in Budapest (I wish someone would discover me and magic me away to Budapest!).

I probably could have lived without endless descriptions of the flirtation with her much older married cousin and her father’s suspicion of this relationship but failure to stop it. I much preferred Daphne’s description of being swept off her feet by her future husband, who read her book, heard it was based on Fowey in Cornwall, and went down in his motorboat to see it and the author.  She meets him in April and is engaged by June, although she had a boyfriend already.  Admittedly, her marriage did not live up to the early romance.

I enjoyed the description of the creation of her first book, The Loving Spirit, and I promise to read that book next year, Ali! 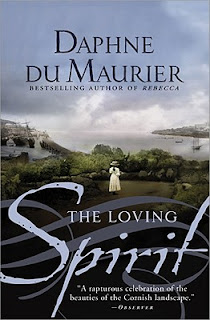 Source: Personal copy.  One unexpected reaction to this book was that the picture of young Daphne on the cover reminds me very much of my grandmother, born seven years after Daphne.  I have her copy of Jamaica Inn, a beautiful edition tooled in gold.

I absolutely loved this book when I read it. I kept meaning to get around to reading a biography of Daphne Du Maurier but never have. As a Cornish teenager living in Penzance I remember falling heavily in love with Frenchman's Creek but suspect it would not have the same effect on me now.

I'm gad you enjoyed this memoir. I really like the sound of it so it's definitely one for the list. I am currently reading her novel The Parasites which is said to be quite autobiographical.

A very, very interesting post, and one I want to return to tomorrow. I missed the WEEK, even though I learned of it about a month ago and wanted to participate. I hope I can next year. The book you read sounds fascinating, and I'm sure I'd like to read it, as I'd like to read so many more of her novels.

I stupidly did not know about this reading week! I read Frenchman's Creek a couple of weeks ago and could have participated. This autobiography sounds like a wonderful companion to her novels as one could try and guess what real life event inspired some of her novels. I think her books are 100% entertaining, but I much prefer her psychological suspense novels (Rebecca, My Cousin Rachel) over her romantic suspense novels (Frenchman's Creek, Jamaica Inn).