Time for another round of Bookshelf Traveling in Insane Times which is being hosted by Judith at Reader in the Wilderness.   The idea is to share one of your neglected bookshelves or perhaps a new pile of books.

Sometimes you can trace your acquaintance with a particular author to a specific moment.  In 1997, I remember reading a review of Wild Designs by English writer Katie Fforde in Publishers Weekly and thinking a friend studying landscape gardening might enjoy it.   I came across a copy and liked it so much I kept it!  (I did eventually find another copy for Heidi but am not sure she ever read it. ) I was much younger than Fforde’s often middle-aged heroines then but I liked her humor and her realistic portrayal of daily life (including its crises), even if her characters don’t really vary much from book to book.  Some of the earliest books are the best.  Two of my favorites are The Rose Revived (1995), about three acquaintances who become housecleaners together, and Thyme Out (1999), about an organic gardener forced to be on a television cooking show with her ex-husband, a gourmet chef. 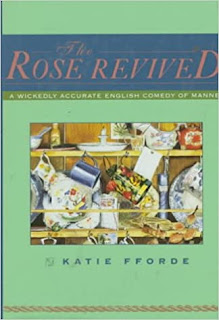 I thought I owned all her books but see I have *just* fifteen of twenty-six.  Possibly some have not yet been published in the US by St. Martin’s or the titles were so unfortunately generic I thought I had already read them! There's no room, anyway! I really enjoy Fforde’s books and have an extra copy of Stately Pursuits which I will happily send if someone would like to try this author.  I think she is perfect pandemic reading and I am now four chapters into a reread of The Rose Revived, ignoring the violent crime novel I was going to read tonight!  One of the things I like about it is the friendship of the three women, as well their different interests and situations.  This is something Nora Roberts does well in her many series that focus on three sisters or friends, each getting her own book.

Some might categorize Fforde's books as chick lit but I would say “light women’s fiction” instead.  They are amusing and they do end happily but they usually have substance or realistic characters or both.  When I think of chick lit, I think of Bridget Jones’s Diary, which I enjoyed, but the term is usually used as a pejorative and has connotations of ditzy heroines.  Katie Fforde’s first book was published in 1995 so she predated Bridget Jones’s Diary (1996 in the UK and 1998 in the US) although I know Helen Fielding began BJD as a newspaper column.
What puts the chick in chick lit?

The heroine is either looking for Mr. Right or getting over Mr. Wrong.
She's in a dead-end job or is looking to climb the corporate latter.
She often works in public relations, advertising or for a women's magazine.
The tone is often light and funny.
The story usually is told in the first person.
By novel's end, the heroine usually has worked out all her problems and has learned important lessons about life.
Quoted from USA Today 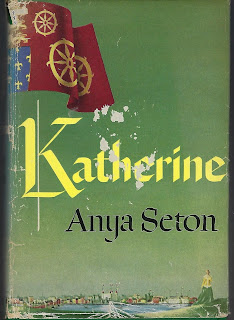 At the very different, other end of the shelf is American writer Anya Seton (1904-1990), author of Katherine, which usually ranks high on lists of all-time favorite historical fiction.  Seton was both an incredible storyteller and a meticulous researcher.  When my school librarian handed me a shiny new paperback in junior high, I loved it from the first pages, despite a lurid cover and the fact that one of the bad characters was named Costanza.  My recently acquired paperback of My Theodosia is tucked onto the shelf above the hardcovers.   Her biggest (and extremely racy) bestseller was Green Darkness in the early 1970s, a time travel romance involving reincarnation and broken vows (if you are a fan, you can visit the places that inspired the book).  I remember reading it aloud to a slumber party – surprised no one called my mother to complain the next day!  After all, I once got maligned for recommending The Secret Garden!
My other Anya Seton reviews include her first book, My Theodosia, about Aaron Burr’s daughter; Dragonwyck, a gothic set in upstate New York; and  Avalon, a story of 10th century England that is an odd story.   I see there is a new biography of Seton available at my library via Hoopla.  If I didn’t already have more than 40 books checked out, I would be tempted . . .
Posted by CLM

Wow - 40 books checked out! I think we're only allowed 5 - in normal times anyway. I've been meaning to read Katherine by Anya Seton for years as so many bloggers recommended it after I read Green Darkness. I haven't read anything by Fforde, maybe I'll give her a go when I eventually get back to the library.

I've read a few Katie Ffordes and enjoyed them all, particularly Love Letters (I loved the chick-lit authors at the literary festival), Thyme Out and Living Dangerously with its Pride and Prejudice bent. I do find they vary a bit though. Katherine is on my all time favourite list, I may have mentioned that before. As regards Anya Seton, apart from Katherine, I loved My Theodosia, Avalon and The Winthrop Woman. I'm not sure if I've ever read Green Darkness. My Seton reading days were back in the 70s and libraries then did not do inter-library loans so I may not have. It could have been Avalon which spawned my love of armchair travelling because I couldn't have been more thrilled when the heroine was kidnapped and shipped off to Iceland. LOL!

Katherine, which I read as a teenager, is one of my all-time favorites, along with Desiree - both, I think, examples of how the importance of women was long ignored by conventional historians unless they were actual regents! I also enjoyed "That Winthrop Woman."

Katie Fforde is a favorite. I do feel that she set out to be more of a 'serious' writer and evolved (devolved/) into a reliable source of chick-lit later. I wonder if she's as good a gardener as most of her heroines?

I enjoyed that list of markers for chick lit. I have always wondered how to tell if a book is chick lit. I think the element I would have a problem with is the consistent use of a romance element. Not that I never like a romance in a book. And of course, there are other more prominent elements.

Defining chick lit seems like trying to define the cozy mystery. There are so many different definitions, almost as many as there are readers. I had the impression that it had to do with shopping a lot, and I don't like to shop.

I haven't read anything by Anya Seton or Katie Fforde, although I think I would start with Anya Seton if I was going to try one or two of their books. Although the two Fforde books that you described, with housecleaners and a landscape designer as characters, sound promising.