The message of doing little is appealing, especially during the current heat wave, and inevitably leads to my first book, The Story of Doctor Doolittle, Being the History of His Peculiar Life at Home and Astonishing Adventures in Foreign Parts (1920), written and illustrated by British author Hugh Lofting.  It was the first of his Doctor Dolittle books, a series of children's books about a man who learns to talk to animals and becomes their champion around the world.

I always assumed he was an English vet but although British he actually spent a year studying engineering at MIT before returning to Britain to a military career.  Interestingly, he turns out to have been Catholic.  After WWI, he settled in New York and Connecticut, of all places!   I remember getting a nice hardcover as a Christmas present when I was 7 or 8, which I think was the first two books combined.  It was actually the sequel, The Voyages of Doctor Dolittle, which won the Newbery Award in 1932. 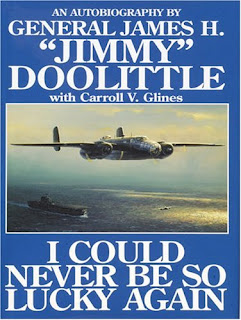 Dr. Dolittle reminded me of Jimmy Doolittle, the famous WWII aviator.   Coincidentally, he also attended MIT, after serving in WWI as a flight instructor and reserve officer.  Between the wars, he did aviation testing and during WWII he led the famous Tokyo Air Raid in April 1942, for which he received the Medal of Honor. He has been played in movies by Spencer Tracy, Alec Baldwin, and Aaron Eckhart.  My second book is his autobiography I Could Never Be So Lucky Again (1991), published in paperback by Bantam.  Why are there so few heroes any more? 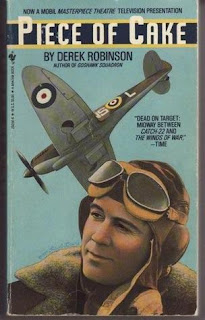 My third book is Piece of Cake by Derek Robinson (1983), which follows a fictional Royal Air Force fighter squadron through the first year of World War II and the Battle of Britain. It was made into a UK and Masterpiece Theatre miniseries in the late 80s and Bantam, where I was working at the time, did the novelization tie-in.   I remember watching the TV series but having a hard time keeping the characters straight. Had the Internet existed then, I would have been grateful for episode recaps!
Piece of Cake reminded me of "Let them eat cake!" which brought me to my fourth book, The Fatal Friendship by Stanley Loomis (1972), my fourth book.   This is about a romance between Marie Antoinette and a handsome Swedish nobleman, Axel de Fersen, who tried to save her from the guillotine. Loomis was originally from Massachusetts and served as a Japanese translator during WWII so there are other connections from the previous books.  I think it was a bestseller in its day; I read it at my grandmother's long ago. Count de Fersen was very handsome: I am sure I would have fallen for him too! 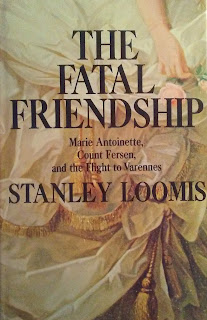 Oddly enough, Count de Fersen turned up during the Revolutionary War in America and in a book by my beloved Margaret Leighton, Who Rides By? (1955), my fifth book.  A Radcliffe graduate, class of 1918, who became an Army nurse in World War I, Leighton (1896-1987) married in 1920 and moved to Clarendon, Va., where she was raising her children when her husband died in 1935. She and her children then moved to Santa Monica to live with her parents. It was there that she sold the first of the 22 books, many of which were acclaimed and selections of the Junior Literary Guild.   Some of her books featured characters based on her own four children. 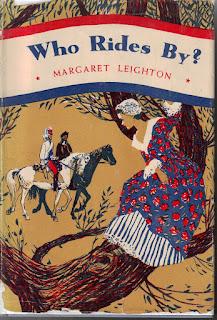 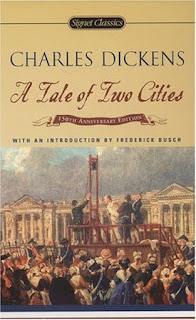 For September, Kate has chosen Curtis Sittenfeld’s latest novel, Rodham, to start with.   I do not approve of using Sittenfeld having used/abused Hillary in this way but will see you then, if not before!
Posted by CLM

Very nice chain. And interesting to link Dr. Dolittle to Jimmy Doolittle. Someday I will read more Dickens, but I have not read enough to have a favorite. In the next month or two I will try to get back to doing Six Degrees, I just can't fit it in with all the other things I want to do.

This is an interesting chain. Am I the only person never to have read Doctor Dolittle as a child, I wonder?

I know I saw the movie Doctor Doolittle when it came out - not very good, if I recall correctly. Rex Harrison can't sing. But nevertheless, I'm unsure if I ever read the books. Never mind. Great chain!

I forgot the movie featured Rex Harrison. I started to speculate that perhaps the book was beloved in his family but now see he was married six times, with several acrimonious divorces so a warm fuzzy family life seems unlikely. But here he is talking to the animals. And, Davida, I took your advice about the breaks although they don't always seem to show up.

Very interesting post. I adored the Dr Dolittle books as a child. Especially when they pinpointed the map to see where they would travel to next. I must revisit them.