Backwater War by Peggy Woodford - WWII in the Channel Islands 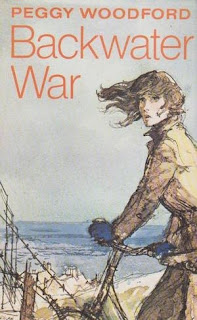 Description: German forces have occupied Guernsey, appropriating food and resources from the islanders who are British subjects.   Anna Hardy’s younger brother has been evacuated with most of the Island children but at 17 Anna refused to go, feeling she could not run away.   When the Germans requisition the Hardys’ house, Anna and her parents have just a few hours to pack clothing, food, and valuables and take refuge with a difficult aunt five miles away.   As Anna begs a neighbor to lend a cart to help them save as many belongings as possible, she witnesses even worse deprivation than the Islanders experience – a labor camp where the German prisoners of war are kept in brutal conditions.   A few days later a young Polish prisoner escapes and collapses on the Hardys’ doorstep, putting the Hardys at great risk.  Soon, Anna’s father is deported to Germany.  As Anna and her friend Fred become frustrated by the German forces and increasingly militant, they look for a way to strike a blow against the Nazis.

My Impression: This is an enjoyable historical novel written for middle graders before there was much of a young adult category, although the heroine is 17 and part of the book involves a love triangle.  Anna yearns for Fred, who cares only for fighting the Germans, instead of sensitive Marek who worships her.  This reminded me a little of my beloved K.M. Peyton who describes yearning so well! The descriptions of how the Islanders cope with the Germans and share what little they have – repairing shoes with bits of old tire and sharing the last bottle of wine so the Germans don’t get it – is what makes the book appealing.  Anna’s aunt is a particularly interesting character: she doesn’t think much of her English-born brother-in-law and the Hardys are afraid she will turn Marek in to the Germans if she learns they are hiding him, but she is generous to the family members who seek refuge on her farm and supports Anna when it matters.  Fred’s family are farmers, and pre-war would have been sending cut flowers, one of Guernsey’s popular exports, off-island.  He is a vividly drawn but annoying young man, self-absorbed, sexist, and quite convincing.  The reader roots for Marek, especially when he reveals he can quilt!  I also liked that he was a devout Catholic and determined to make his Confession, although risky.

Guernsey is the largest of the five Channel Islands, about 27 square miles and, unless they read The Guernsey Literary and Potato Peel Pie Society, casual American readers probably do not know that it is a self-governing British Crown dependency, with an English and French culture and its own dialect, although the primary language is English.  The Islanders must have been astounded and bitter in June 1940 when Britain's war cabinet voted to leave the Channel Islands to fend for themselves during a German invasion.  The Germans do not appear to have been as brutal to the Islanders as they were in other countries, and it is speculated this is because they did not resist.  Anna asks her father (hopefully) if there is any secret resistance in the Channel Islands, and he replies that the Islands are so small it would be impossible to keep anything secret, but this makes her even more determined to defy the Germans in some way.  The children who were evacuated did not see their families again for five years, and we don’t know if Anna’s father would have survived a German prison camp.

This is my second book in the 2021 Historical Fiction Reading Challenge hosted by Marg at The Intrepid Reader. 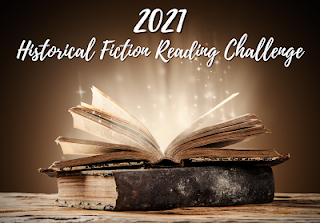 Source: Library.  I read about this book recently in The Juvenile Novels of World War II, and the Commonwealth Catalog found me a copy quite promptly from the other end of the state.
Posted by CLM

I think the Channel Islanders, with their wartime occupation, thought of themselves as forgotten - justifyingly - until the late 1990s so I was surprised to see the date of this one, 1974. They were the only part of the UK to be invaded during the war and it was pretty grim for them. I always think it's very odd that they're so close to the French mainland and yet they're British but apparently they like it that way. You might have thought that after being abandoned during the war they'd have changed their minds about that but no. We've never been but my inlaws loved Guernsey... Jersey not so much. I gather there's a great deal of rivallry between the two islands.

A couple weeks ago I saw an obituary that I read because I wondered if the deceased had known my father. His fond but perhaps poorly educated children wrote that their father was an avid military historian and loved travel: "They made a pilgrimage to Normandy, France in 2015, to visit the allied cemetery, visiting numerous town along the Seine River. A highlight of their travels was a trip to the British Isles in 2018, where he had the opportunity to visit many battle sites of WWII." !!! It came to mind as I was reading about Guernsey and I hadn't recycled it yet.

I read the obituary to my mother who said she hopes we pay more attention to her travel stories!

I see Guernsey is noted for tourism due to its beaches, I suppose, but does it get really warm?

Love the sound of this one! Mostly because of the setting. :)

Thanks so much for writing about this one. I'm especially interested, and even more specially because of the pub date. Reminds me of others for young people published around this time, which I have really appreciated. Will SEARCH for it, wherever it leads me. Thank you!

Thanks, just found it available as a Kindle e-book. Most interested, because of the pub date.

This sounds as if it's right up my alley, as well! Thanks, D

I thought that The Guernsey Literary and Potato Peel Pie Society was a rarity, a book set in WW time and about the Guernsey Island. Apparently not!
~ Lex (Lexlingua.co)

Great review, Constance. and this sounds like a very good book. I know very little about Guernsey , although I had heard about the area being invaded and occupied during World War II. I do have a copy of The Guernsey Literary and Potato Peel Pie Society, which I should get around to reading.

I really liked The Guernsey Literary and Potato Peel Pie Society, although don't remember it well. I started watching the miniseries last week but got distracted. The heroine is played by Lily James, who played the annoying cousin, Lady Rose, in the last season(s) of Downton Abbey. She is a little too perfect looking for my taste, if that makes sense.

There is a new novel set on Jersey, The Girl from the Channel Islands, that is getting good pre-pub word of mouth: https://www.harpercollins.com/products/the-girl-from-the-channel-islands-jenny-lecoat?variant=32126591860770 And of course there is Green Dolphin Street, set on St. Pierre, which I read for the 1944 Club a few years ago.

Can you tell I feel the need for some armchair travel? Tracy, I do think that Americans like us who read a lot of history and historical fiction are pretty well informed but you would be amazed by some of the knowledge gaps of my colleagues. I know that a year of US History is required in most high schools and some never reach the Vietnam War but two college interns didn't know Pearl Harbor brought us into WWII. And if the media does not vocally condemn Holocaust deniers, etc. then young people won't know what to believe.

The thing about history is that there is so much you could never learn it all. When I first became interested in World War II, I realized how much there was to learn about it, and it seems like an impossible task. And then when I read more about Tudor kings and such, I realized how ignorant I am. Although I think I read a lot about that when I was younger (in fiction) and now I have forgotten it.

I am now reading The End of Your Life Book Club and enjoying it. Except it is sad.

Well, I'll happily confess I don't like Lily James either. I watched the Guernsey movie and it came nowhere close to the book, and found James particularly annoying. I ended up counting the number of times she said 'sorry" to everyone in the movie (let me tell you, several times!); so I agree with your sentiments.

And for historical fiction, I do think my own reading has been limited to a few specific regions or periods in history - so finding anything out of those common grounds is always compelling for that reason.