My book group decided to read a book by John LeCarré (1931-2020) for our January meeting after several members expressed sorrow at his passing and enthusiasm for his body of work. Tinker, Tailor, Soldier, Spy was chosen as both one of his best and one that would work as a standalone for those unfamiliar with him.  Normally, I like suspense and espionage fiction but I found this tedious and had not finished tonight when we met so I am still reading it. 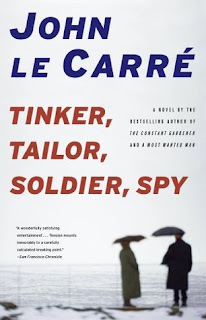 I just finished Star Island by Marjory Hall (1908-2003).   This is the first in a trilogy about Carolyn Winthrop, a senior in high school (perhaps in Connecticut or Pennsylvania) who is overlooked in a large, lively family and lacks self-confidence.  When she is asked to be a counselor at a summer camp in upstate New York, Carolyn is apprehensive but rises to the challenge.  Over the busy summer, she matures, learns how to lead, and finds a boyfriend at the boys’ camp across the lake (a staple of camp fiction).  Fans of summer camp (and its juvenile/YA fiction) will enjoy the detail of the activities, the planning of the counselors to entertain the campers, and the personal growth. I was amused that Carolyn’s high school graduation is secondary to getting ready for camp and although she is going to college, it is never mentioned.  As a teen, I read several of Hall’s career novels (written mostly in the 50s like this, including one I came across in 2015, A Hatbox for Mimi, which I startled my coworker Mimi by giving to her.  Well, wouldn’t you like a book with your name in the title? 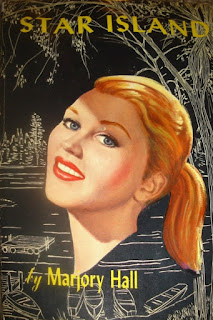 I am about to start The Proper Place by O. Douglas (1877-1948), which someone advised me was a good starting point:

After the Great War, the Rutherfurds reluctantly sell their beautiful old ancestral home in the Borders to the nouveau riche Jacksons from Glasgow. They settle in Fife but ties are not completely severed as Mrs. Jackson asks for the Rutherfurds’ help to face the 'county'. A gentle comedy of manners with poignant observations and devastating wit.

Douglas was a Scottish novelist and the younger sister of John Buchan, author of The Thirty-Nine Steps (made into one of my favorite Hitchcock movies) and others.  I acquired two of her books when I was in Cardiff nearly two years ago but I’d gathered there are some recurring characters so I did not want to read out of order.   I asked the Boston Public Library to order this book and it obligingly purchased an ebook.  I’ll let you know what I think!

I'm one of those people who can never decide whether I would like John Le Carré's spy novels or not. I know people that adore them but I've always suspected I might find them a little tedious and what you've said here bears that out... given how similar our tastes seem to be. I do know that I tried to watch the newish film and was so bored I could not get to the end. And yet I'm not an easily bored person so it seems a bit odd.

I'll look forward to your thoughts on the O Douglas (I've enjoyed some of her brother's books, LOL) as she's been on my radar for some years now but I've never actually got around to her.

Interesting titles! Thanks for sharing, and enjoy your week. Here's MY WWW POST

I enjoy le Carre's books but maybe more than most you really have to be in the mood for them. I've also read all of O. Douglas' books, they're very old-fashioned and 'coothie'. Sometimes she veers into the preachy (I think that's what her brother called her 'Pink Suger', he told her to keep it out but she disagreed and used it for the title of a book). I think John was correct though. I know all the book settings which is always a plus for me.

I finished Tinker Tailor Soldier Spy about 1 am, and I am happy to say that the last 100 or so pages did tie everything together so I wound up appreciating the book much more than I expected. I think listening on CD would have been very confusing as the action goes from present to past and back. One person in my book group said she watched the movie (or miniseries) too because she had a hard time keeping the characters straight. I can see Charles Cumming's books are very influenced by Le Carré but they are easier to follow!

Katrina, I see The Proper Place is set in Fife!

I have an O Douglas on my reading list too -- but that's Penny Plain. Someone mentioned it as one of their best of 2020 books, and so, of course I had to read it!

For Tinker Tailor Soldier Spy, possibly that's one of the rare cases of movie being better than the book. Or maybe I just liked it because it had Colin Firth. Can't remember but the twist near the end was interesting.

Yes The Proper Place is set in Fife and I recognised the house when she described it as it's very close to where we lived then. You can see what I thought of it, or maybe dodge that and just look at the photo. https://piningforthewest.co.uk/2013/01/16/the-proper-place-by-o-douglas/

You might have seen that I had quite a wallow in O. Douglas lately, very SCOTS with a lot of religion mixed in - avoid Ann and her Mother at all costs. Excellent for DE Stevenson fans.