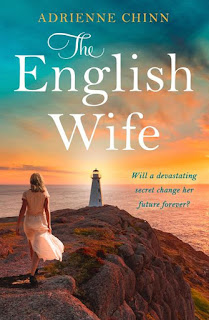 Description: This is a story of two sisters living in Norwich during World War II and their descendants.  Ellie has always planned to marry her childhood friend George until she meets an outgoing Canadian soldier from Newfoundland.  Her sister Dottie disapproves because she doesn’t want Ellie to move away and her father disapproves because George is not Catholic, but Tom persuades her to tie the knot before he gets sent overseas.   The second element of the story involves Dottie’s daughter Sophie, an architect on her way to a big interview in New York on 9/11, who gets diverted to Newfoundland and calls the aunt she has never met for a bed.  Sophie finds the warm family life she never knew at home but is determined not to give up on her ambitions.  Looming over both stories is the secret that caused the sisters’ estrangement, which no one is left to answer but Ellie, a resilient character who never gives up.

My Impression: As I stated to someone just Sunday, dual timeline stories are very enjoyable if done well.  I enjoyed this novel, although there was a little too much intrigue in Part 2 (I don't object to intrigue but it seemed as if the author just threw as much as she could against a wall to see what would stick).  One has to understand Ellie's story to understand Sophie and her hangups, and I preferred the historical fiction aspects: Ellie’s WWII story – her friendship with Ruthie, her art studies, the fact that she and George were Catholic, and even her squabbles with her sister – and I liked the descriptions of how Newfoundland welcomed the thousands stranded on 9/11 and Sophie’s discovery of her family.  I was reminded of the recent musical, Come from Away, which takes place during that terrible week.  As theaters are closed, I ordered the CD.

I look forward to discussing this book with someone else who has read it, as a few things puzzled me.  Tom is so outgoing and personable in England during the war but is like a completely different person afterward.  He has definitely suffered, so it is understandable but Ellie’s existence with him is so bleak it is hard to imagine why she stayed – if her father was a headmaster at a school, I think he could have borrowed the money to bring her home.  In her plot, the author relies on a lot of intercepted mail and messages, which is fine but I suggest that keeping it to one character would make it more convincing.  Sophie is not a very likable character, and she really comes across as being a lot like Dottie, although we are meant to think Dottie’s pressure on her to be successful caused her ruthless ambitious streak.  The secret itself is improbable on several levels but provided an interesting plot element. Less convincing is that when we meet Ellie in the 21st century she has become a lesbian, without any explanation, or that Sophie would forget one of her new relatives can lip read.  And having been living in New York on 9/11, I also questioned whether Sophie would have been able to reach the receptionist at the firm where she was supposed to interview: as I recall, the subways were down, no one could get to work, and I think most people were told to stay home on the 12th anyway.

This is my third book in the 2021 Historical Fiction Reading Challenge hosted by Marg at The Intrepid Reader.

About the Author: Adrienne Chinn was born in an old paper-making town in Newfoundland, and grew up in rural Quebec and Montreal. She retraced her English father’s footsteps back to England, where she now lives and works as an interior designer.

Unexpected Warning: I don’t remember a publisher that solemnly warned me, as this does, “Please be advised this book features the following content warnings: bereavement, suicide, descriptions of war.”  Hey, if you eliminate those topics we’d miss out on a lot of good books, especially those about World War II!  On the other hand, my friend Karen is unwilling to read books with infidelity and might appreciate a warning, although it would be a spoiler.  I had to warn her once when she had purchased The Bridges of Madison County that it was a bad choice for Mother's Day if that was one of her criteria!

Source: I received a copy of this book from the publisher and TLC Book Tours in return for an honest review.  You can visit other stops on the tour by clicking below:

February 26th: View from the Birdhouse

Friday, March 5th: What Is That Book About

I'm not sure about this one although in the past I've enjoyed a Newfoundland setting. That Unexpected Warning is crazy, but it made me laugh.

I think the problem with Tom was that his injuries really made him very bitter and angry with the world, so it makes sense that he wasn't so nice once he was back home. I have seen the musical and it made me cry from beginning to end. The best musical I've ever seen, and when she writes about 9/11 I started to cry again! If it wasn't for that, I don't think I would have given it as high a rating as I did, to be honest. I'm not sure if the WWII parts were as strong for me as they were for you. In fact, I think they really were weaker than the contemporary parts - but we can agree to disagree about that.

Oh, one other thing... She was bisexual, from the beginning. Remember the best friend who died in an air raid? She was in love with her, but didn't know it.

Well, I agree that losing your leg and having to cope with that as a fisherman could logically cause Tom's drinking and moroseness, and that marriage was more permanent then so she was stuck (although there were war brides who turned around and went home) but I didn't see the friendship with Ruthie that way. I'll have to reread that section. Also, would she really have betrayed Tom so soon in their marriage when she never seemed very attracted to George?

I do wish I had seen Come from Away but now will be able to:
https://ew.com/theater/come-from-away-filmed-version/

I am mostly interested in this book for the setting in Canada. I hope I can get around to reading it someday.

This sounds lovely, thank you for being on this tour! Sara @ TLC Book Tours