Susannah of the Mounties by Muriel Dennison - for the 1936 Club 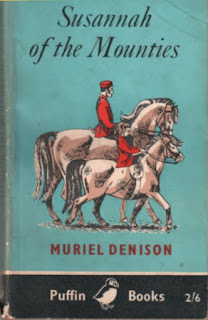 The 1936 Club is hosted by Simon from Stuck in a Book and Karen from Kaggsy’s Bookish Ramblings.
Description: When Susannah’s artist father gets a big commission in India, her parents put her on a train in Montreal with a newly hired nanny to her uncle in Regina. Dennis Lyons is an officer in the Royal North-West Mounted Police (the Canadian “Mounties”) living in barracks in a rural community. Lyons and his commander are horrified at the idea of a child living amongst the Mounties, and Susannah confirms their fears as she is an irrepressible child, always in mischief and needing to apologize. She finds out that she can make friends, explore the barracks, horses, and indigenous people, but if she does not learn how to fit into the Mounties' disciplined way of life, she will be sent away. 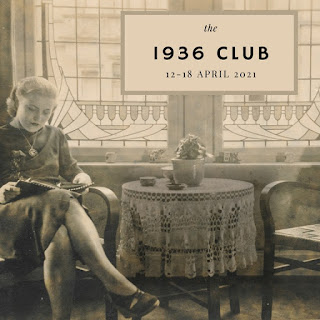 My Impression: This is a charming if predictable story about how Susannah falls in love with the Mounties’ picturesque life of service and yearns to be part of it, but as an impulsive nine-year-old makes mistakes and brings down the wrath of the Commissioner so frequently he decrees she must be sent to boarding school. Susannah can come across as a bit of a brat but she is also warmhearted, willing to befriend the local “Red Indians” and to give her best doll to the timid daughter of the traveling missionary, and staunch in her admiration of the men around her. And when she realizes she has a chance to save the community from danger, she acts courageously and is finally accepted, winning the right to be called “Susannah of the Mounties.” There are three sequels that are hard to find.

The real appeal of the story is the depiction of the dedicated Mounties, the cheerful way they cope with the hardships of living on the frontier, along with “the hard riding and trips to the snow-bound North.” My copy says the book is based on the author’s experience as a child. Dennison was born in Manitoba in Western Canada and subsequently educated in Nova Scotia and in Toronto at Havergal College and the Royal Conservatory of Music. One of the sergeants explains to Sue,

“The Force is here to take care of people, and when you take care of people you don’t just take care of crimes. You help them. See, if you had a farm twenty or thirty miles away from here and you were all alone out there, we’d call upon you every little while and see if you were all right. If you were a Doukhobor and couldn’t speak English and were planting the wrong kind of crops, we’d tell you what to plant. We’d find out if your children were going to school, or if you needed a doctor. If you were an Indian and were drinking fire-water, we’d warn you to behave. We’re here to guide and protect the settlers. That’s our job.”

Admittedly, it is paternalistic or worse when describing the indigenous people (although the Mounties respect Laughing Cloud, the local chief) but that is typical of the era.  One episode involving a native child running away from and being forced back to mission boarding school for children is very disturbing.
Lady Tweedsmuir was the wife of author John Buchan and a writer herself. She was living in Canada when Susannah of the Mounties was published while she served as viceregal consort of Canada while her husband was the governor-general. She was known for her philanthropy and support of literacy, including a project of gathering books for western communities and sending train carloads of them west long before there were public libraries. From Government House in Ottawa, she wrote in the Foreword:

“The splendid tale of the Mounties’ . . . complete forgetfulness of self, and their magnificent discipline is told with a charming lack of priggishness and delightful touches of humour. We are shown Regina in the nineties set against the beatify and wonder of the prairie landscape and sunsets. All right-minded children with an adventurous spirit will love this book, and it will show them something of the romance of Canadian life which they will never forget.”

Movie: Shirley Temple starred as Susannah in the 1939 movie, which is likely to be more familiar to people than the book. Naturally, Hollywood changed the story, setting it earlier in the 19th century and eliminating the character of the uncle.  I actually think Shirley Temple was perfect for the part.  Take a look! 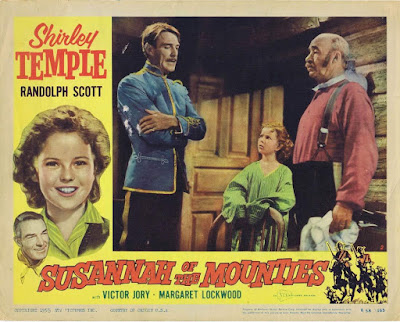 This is my eighth book in the 2021 Historical Fiction Reading Challenge hosted by Marg at The Intrepid Reader.

This is another book and film that I've never heard of, although I do have a book by Susan Tweedsmuir - John Buchan by His Wife and Friends, I haven't got around to reading it yet.

There were a number of classic children's books that turned into Shirley Temple vehicles and are now mostly forgotten. The Little Colonel is another. I thought it was interesting Lady Tweedsmuir had written the Foreword! I assume she and the author had met socially in Ottawa or Toronto.

I can't recall if you are a fan of The Thirty-Nine Steps? I just read there is going to be a remake:

There is also a new book about Buchan I'd like to read at some point.

It's very rare to find books set in Canada, at least, rare for me. I'm going to look up the movie for sure, even if different from the book. And I certainly didn't know Tweedsmuir was Buchan's wife. I recently found out O. Douglas was Buchan's sister. I have loved Buchan's The 39 Steps, so both of these connections were very interesting!
~Lex

Well, you know I like books about Canada and the Mounties have always intrigued me. Sounds very good.

Love this unusual choice :D Thanks for adding it to the club!