The Middle Temple Library is located in the Middle Temple Inn of Court, one of four legal organizations in London providing training to aspiring British barristers (see website).  The library provides reference services in person and virtually to members of all four Inns of Court, and its collection includes approximately 250,000 volumes as well as periodicals and other items of interest. The library is known for its ecclesiastical law collection, as well as European Union and American law resources. Most of the collection consists of reference books that do not circulate but certain titles can be borrowed at the end of the day and returned early the following morning. The library is open on weekdays only from 9:00 am to 7:00 pm and has a staff of eight, of whom five are professional librarians. 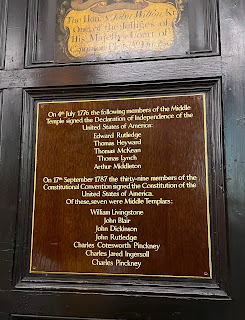 Loving all detail of your days! I had no idea about any of it. Fascinating. Sorry you've hit London when the Tube's planning several strikes.

Thank you for the virtual tour. London is one of my very favorite places. If you happen to be passing a LEON restaurant, it's work a look. My daughter and I were obsessed with their food when we were there. Oh, have a fantastic trip! Bring home plenty of biscuits!

This is a very interesting library and your photographs are fantastic.

What a great post! I learned so much since all I knew about the Inns of Court before reading your post was what I learned from reading Dickens novels! I loved your story about navigating the bus system.

We never seemed to be at a Leon when we were hungry, although once you mentioned it, I saw quite a few!

By the second week, we had figured out the bus system pretty well, thanks to a great app that told us the identifier for each bus stop.