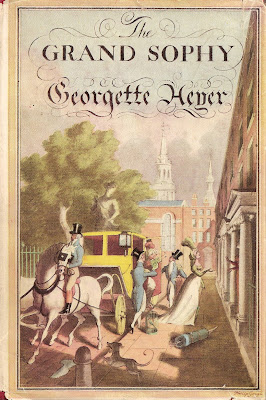 When Sophy, 20, arrives in London to spend a Season with her cousins, the Rivenhalls, she is more mature than the average Regency miss due to having grown up in diplomatic circles in Europe as the hostess of her father, Sir Horace Stanton-Lacy. At first, she wonders how she will keep herself entertained while her father is in Brazil but she soon perceives that the Rivenhalls, while welcoming, harbor many secrets. Her uncle, Lord Ombersley, is carelessly indifferent to the fact his gambling has brought the family nearly to ruin. Her father’s sister, Lady Ombersley, is worried about her children but completely ineffective. Charles, Sophy’s eldest cousin, is engaged to a disagreeable girl who is having a negative effect on his personality. Cecilia, the cousin closest in age to Sophy, is warm and affectionate but has fallen in love with an ineligible poet, ignoring the most attractive man in the book, Lord Charlbury, who at first appears to be more suited to Sophy herself. The younger cousins are pert and poorly behaved, while Sophy soon realizes that Hubert, a not-very-serious student at Oxford, is in serious trouble that he is too ashamed of to share with anyone. Sophy believes that “a little resolution is all that is wanted to bring matters to a happy conclusion,” and her schemes are delightful even if they do not always turn out exactly as she has planned. She is intrepid, carrying a small but serviceable pistol in her muff as protection in the most controversial part of the book, in which Sophy takes on an avaricious money lender. Modern readers are often offended by the anti-Semitic depiction of the money lender. While regrettable, it is otherwise a delightful scene, and I believe it would be wrong to let this lapse by author, a product of her time, spoil one’s enjoyment of the book, which was published in 1935. In fact, the message of that chapter – and, indeed, of the whole book - is that Sophy, while outwardly effervescent and merry, is the one person in the family perceptive and caring enough to extract confidences and solve problems. Ultimately, her loyalty and sense of responsibility win over all (or nearly all) who know her. As Heyer states in Chapter Three, “Sophy would never be a beauty. She was by far too tall; nose and mouth were both too large, and a pair of expressive eyes could scarcely be expected to atone entirely for these defects. Only you could not forget Sophy, even though you could not recall the shape of her face or the colour of her eyes.” Romantic heroines are usually beautiful: Sophy is very attractive but that is not what people remember about her, another way in which Heyer challenges her readers. I hope those who have not read Heyer will try The Grand Sophy. I also recommend Jane Aiken Hodge's book, The Private World of Georgette Heyer. In 1988, I wrote to Mrs. Hodge about her own books (particularly Savannah Purchase), mentioning I also liked this one and she very kindly sent me an autographed copy, which I cherish along with her letter. Somehow I missed the sad news that she died last July. I like this sentence from the obituary: Hodge was enchanted with the reviewer who described her novels as having “all the lightness of Georgette Heyer, with an added substance besides.” Thank you for visiting.
Posted by CLM

The Grand Sophy has long been my favourite Heyer, so it's great to see another fan! And what a lovely story about Mrs. Hodge.

The Grand Sophy is among the best of the Heyer Regency Romances, and I really did like the spunk and style with which Sophy earns the title "Grand."

I've been meaning to get the Joan Aiken book on Heyer, and it was a treat to hear about your encounter with the author. Sorry to hear of her passing.

I enjoyed your review.

I love those original US covers, too! I have a couple myself, but mostly old library versions.

Like you, I love Sophy. She is such a confident and fun heroine and I think she complements Charles so well- not many can make him laugh ;-)

Very much enjoyed your review. I love The Grand Sophy!

Ok, you've intrigued me to try more Heyer...that's quite a feat!

Although I didn't love my first Heyer (it was just okay), I do think I need to give The GRAND SOPHY a try because it sounds so fun!

Thanks! I just read it. What a fun story!