It’s time for #6degrees, inspired by Kate at Books Are My Favourite and Best. We all start at the same place, add six books, and see where we end up. This month’s starting point is Beezus and Ramona, the first book in the Ramona series, by Beverly Cleary, who died on March 25, 2021 at 104. 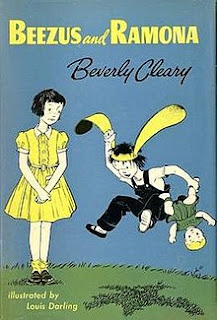 It must have been obvious early on to Mrs. Cleary that Beezus’ pesky but beloved little sister Ramona had stolen the show in that book and after that Ramona was the headliner in the series. In my first book, Ramona the Pest (1968), she begins kindergarten where she is enthusiastic but misunderstood, at school and home.

“Why don’t you turn on the dawnzer?”’ she asked, proud of her new word.

Beezus looked up from her book. “What are you talking about?” she asked Ramona. “What’s a dawnzer?”

Ramona was scornful. “Silly. Everybody knows what a dawnzer is.”

“I don’t,” said Mr. Quimby, who had been reading the evening paper. “What is a dawnzer?”

“A lamp,” said Ramona. “It gives a lee light. We sing about it every morning in kindergarten.”

A puzzled silence fell over the family before Beezus figured out Ramona was talking about “The Star -Spangled Banner” and “the dawn’s early light” — dawnzer. Their parents tried to keep from laughing out loud. 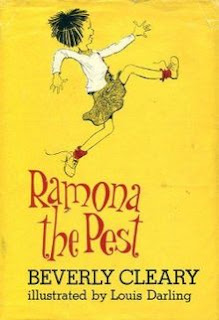 Another Cleary character who goes from one angst-ridden situation to another is Ellen Tebbits (1951) in my second book. Ellen is humiliated because her mother makes her wear woolen underwear under her ballet outfit, and one crisis invariably leads to another. 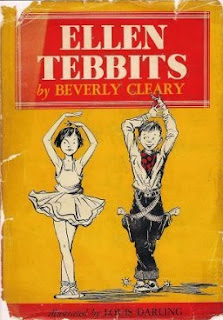 As with Ramona and Ellen, a surfeit of curiosity leads to trouble in my third book, Emily’s Runaway Imagination (1961). This was Cleary’s only historical novel and was set in 1920s Oregon, just about the time Cleary herself was growing up, although it feels more distant. I saw this on my sister-in-law’s bookshelves last night so it must have been one of her favorites. 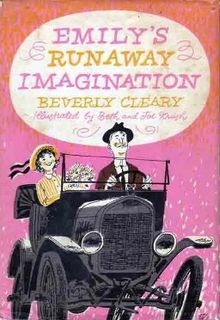 If Emily was inspired by her own childhood, Cleary revealed that my fourth book, Mitch and Amy (1967), was based on her own twins. These twins squabble all the time, have ups and downs in school, but are loyal to each other, especially when it comes to a neighborhood bully. The reason Cleary’s books appealed to children was that she understood how they think. 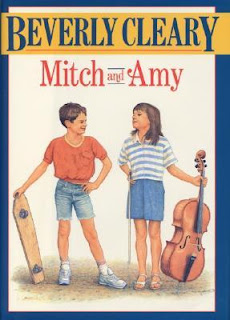 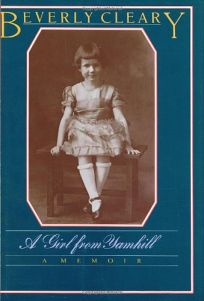 My Own Two Feet (1995), my sixth book, is the second installment of the memoir.  This describes Beverly leaving Oregon during the Depression to go to college in California, how sad her parents are to see their only child depart but they want her to be educated and prepared to earn a living.  She feels a little guilty about being so delighted to escape. I see some parallels to The Luckiest Girl, which is my favorite Cleary but I realized at the last minute had been used in a previous Six Degrees. 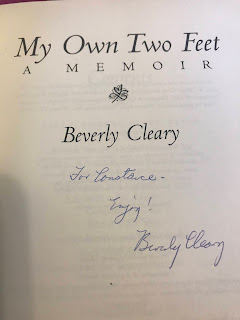 I worked for Cleary’s publisher for two years and was fortunate to meet her briefly when she came to New York, probably for an American Library Association conference. She was very quiet and I think overwhelmed by so many of us coming forward to tell her which book we liked best but it was fun to meet her. Her publishers were always trying to repackage her books to sell more copies and I thought some of the “more contemporary” artwork that was chosen was dreadful. I never felt the juvenile editors at Avon knew as much about children's books as their counterparts at William Morrow on another floor. 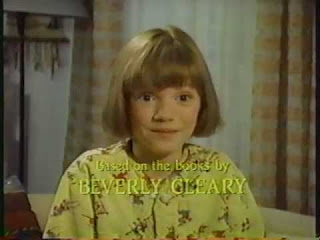 I only saw a few episodes of the television adaptation of Ramona but I remember thinking the child actress was both amazing and perfect for the part. It is nice to read that Mrs. Cleary also thought she was a perfect Ramona! Sarah Polley has gone on to have an impressive career as a director and producer.
Are you a Cleary fan and, if so, do you have a favorite?  I don't think the nostalgia hit me until I started contemplating Beezus and Ramona which I certainly haven't reread since I was 8!

Next month’s chain (June 5) will begin with the 2021 Stella Prizewinner, The Bass Rock by Evie Wyld. I guess it says a lot about the self-absorption of American publishing that I worked in the industry for 17 years and never heard of this award until I read about it in Kate's blog.
For previous #6Degree chains, click below
Posted by CLM

What an informative chain.. I haven't read any of the books you mentioned altho have read a few of Cleary's books and actually have her first memoir. Must dig it out and read it.

This was a perfect beginning book for a chain for you, and you did a great job with it. I honestly don't remember if I ever read a book by Cleary.

I love your chain highlighting some of Cleary’s work! How wonderful tgat you were able to meet her!

I too love Beverly Cleary. Have you ever read Otis Spofford? It is about a "difficult" boy. I loaned it out to boys one too many times and no longer own it but I remember it fondly. If asked to name one of her books that would be it. I really love the Louis Darling illustrations. The newer ones were never as good.

What a great, nostalgic chain this was! I love so many of the books on this list, although I have somehow never read Cleary's second memoir! It was fun to see you feature the Ramona TV series, which I loved as a child.

Well, this one ended up being very personal to you! How lovely. I'm afraid I don't recall ever reading any of her books, but my sister certainly remembers the first one (I'm guessing having me as a baby sister was why she read it)!

Your chain is a lovely tribute to Beverly Cleary. I read a few of the Ramona books as a child, but I don't think I've read any of her others - I've obviously missed out!

Ah, I agree that nostalgia was strong with this starting book. While I didn't read Beezus and Ramona, it made me recall some of my favorites when I was younger. That's so cool that you got to meet Beverly Cleary! Her handwriting is so nice and neat!!

I've never seen the adaptation! If Cleary liked the actress, maybe it's time to watch it -- especially as my daughter is reading (and rereading!) the books for the first time <3

I am sure you two would enjoy it, Deniz. Sarah Polley also played The Story Girl in another series you would like.

Aww, these books look adorable. And to think I'd never even heard of Cleary before. Plus, there's also a show to look for. I am turning more and more to middle grade fiction these days, they're so enormously feel-good. ~Lex

I loved Ramona then and, when I reread her a few summers ago, I loved her even more. There is so much to her story that one can peer at, with the eyes of an adult, that went happily unremarked upon while obsessed with Ramona. While I agree with you about the newer covers, my step-kids were not charmed by the original books, so I was glad that the newer covers caught their attention (unlike many of my other faves, Ramona seemed to "travel" across the years). I just read the Emily book last summer and was pleasantly charmed. And, how wonderful to have a signed copy. Just amazing!