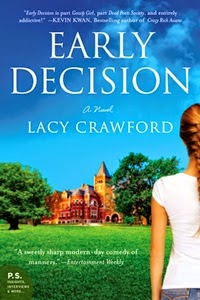 Plot: Anne Arlington is the brilliant young woman who advises (mostly) affluent high school seniors on the perfect essay that will make the difference in their college applications.  But while Anne is gifted at helping an inarticulate student find his or her voice (and thus the way to an admissions officer’s heart), she lacks confidence in every aspect of her life – career, boyfriend, and dealing with neighbors and parents.  Distracted by parents zealous on behalf of their privileged children, when will she be able to figure out the key to her own success?

What I liked:  I could not put the book down, although as an alumni interviewer for Harvard myself, there was not much in it that was new to me.  I have often heard that a great essay can make the difference for an applicant, and I enjoyed how this story was told by looking at several different (and surprisingly appealing) applicants in a combination of narrative and essays.  It was extremely funny while simultaneously convincing and at times horrifying.  I am not sure I have met any parents as dreadful as those in this book but I have seen lots of people lose all sense of proportion during their children’s application process.   And in NYC where I used to live the competition begins with preschool admissions, long before college!

What I disliked: I didn’t understand why Anne was so ashamed of her job, given that admissions consultants can be well paid and successful, and she was clearly very skilled.  Nor did I understand the appeal of her boyfriend, so wondered why she put up with him so long.  She suffered from working at home and not having any friends her own age except former grad school acquaintances.  I got depressed reading about her depression, and was impatient for her to come to her senses.

Source:  I received Early Decision from the TLC BookTours and recommend it as a fun read.  Click here to buy a copy.   I also urge you to stop by the tour to learn more about the author and see what other reviewers had to say about this book.
Posted by CLM

Funny and horrifying are great words for this book!