As the episode begins, we see Claire running urgently and it seems as if she is making her escape and is about to be shot by a sentry, but after a nervous minute for viewers it turns out she is playing with some castle children – clearly getting the lay of the land and discarding her fichu to mark her escape route.  Falling down, she gets an unpleasant view of what Rupert is not wearing under his kilt, and manages a put down with typical aplomb and sarcasm.  Her two unofficial guards whine about her prolonged playtime with the children because they don’t want to miss any of the festivities (Angus and Rupert resemble Shakespearean buffoons in this episode) and Claire pretends to give in, so they can all return to the castle where everyone is arriving and gearing up for the Clan Gathering.
Claire stops in the stables, ostensibly to pick out a horse to use at the Hunt the next day which she’ll be attending in her healer role, but really to earmark one for her planned escape that night.  Oh so casually, she asks where Jamie is because there’s nothing like a flirtation when one is planning to steal a horse, and old Alec, always a downer, warns her to leave Jamie alone because of the Gathering.  “I didn’t think I was a bother,” she mutters with annoyance.   Alex tells her she can use a horse called Brimstone, promising its personality belies the name.  We can only hope.

Returning to her medical scullery in the Castle basement, Claire is startled by nosy Geillis, uninvited and as curious as when we last saw her quizzing Claire about her upbringing.  She notices Claire’s stash of food and jumps to the conclusion that Claire is pregnant.  Startled and indignant, Claire tells Geillis she has never been unfaithful to her husband.

“It’s not unfaithful if he’s dead,” responds Geillis, pragmatic but sensing something off.

“So he’s dead, then,” replies Geillis. If Claire weren’t so desperate for a bestie, she’d realize Geillis is worse than no friend at all!  Claire admits that her husband is dead, and Geillis asks some impertinent questions about whether Claire is barren.  Then she moves on to another topic, noticing that Claire has gathered a large quantity of valerian, which can be used as a sleeping potion.   Geillis tells Claire that when she arrived in town, she had nothing but her wits to survive.  She found an affluent husband and doesn’t mind that he’s not much too look at because she can do as she pleases (famous last words).

“Sometimes you find yourself on a path you never expected.  It doesn’t mean it can’t lead you to a bonnie place,” she tells Claire.   Geillis’ semi-accurate guessing is making Claire nervous so Claire says she’ll see Geillis at the Gathering.   Geillis warns Claire that being a woman alone in the Highlands is dangerous. 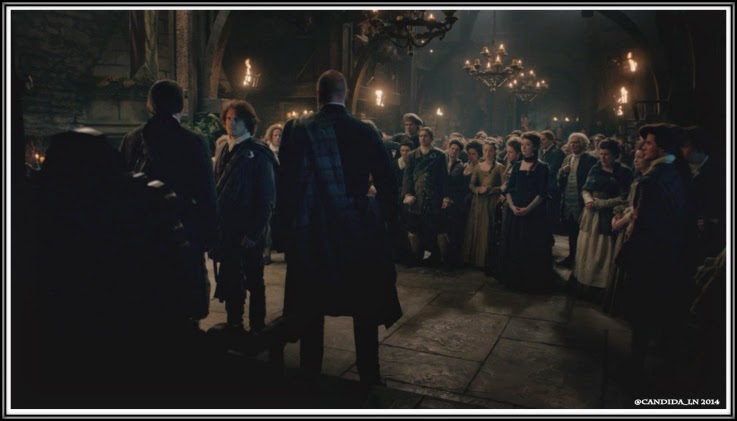 However, the Highlands are very welcoming to Diana Gabaldon, who snagged herself a speaking role in this episode as an elegantly dressed guest at the Gathering (although Mrs. Fitz comments that it’s the same dress Lady Iona wore at the last Gathering – burn!).  Then Mrs. Fitz finds Claire looking for a knife in the kitchen and dragged her away to be dressed up.  The purpose of the Gathering is not just fun but for pledging an oath of allegiance to Colum, Laird of the MacKenzie.  Murtagh translates the symbolic language for Claire while Colum presides, newly shaven and likely wearing the garments he terrorized the tailor about in the previous episode.  Dougal is the first to pledge his loyalty (the women are ignored but get to clap at dramatic moments) and sips from the special chalice.  Claire takes the opportunity to withdraw, pretending she wants to prepare for the next day’s Hunt, but Rupert follows her, begging her to stay so he doesn’t have to miss the fun.   Acting as if she’s given in, she smiles and offers him a swig of port from her handy-dandy Valerian-dosed flask (spitting her mouthful discreetly on the floor).  “It’s a sedative,” she says.   “Is that Spanish?’  Soon Rupert (unless it is Angus) has passed out, which was her goal.

When Claire gets back to her surgery, who is waiting for her this time but that annoying, big-eyed Laoghaire and she wants Claire to provide a love potion to secure Jamie’s affections!  This is not in the book and I don't approve for several reasons I don't have time to go into now.  Claire gives the girl some horse dung (ugh) to sprinkle outside Jamie’s door (but doesn’t he sleep in the stable?).  “Good luck,” says Claire with seeming sincerity but it’s not as if she gave Laoghaire a potion that would actually work . . . so Jamie is safe.

Ready to make her escape, Claire heads outside where she is immediately waylaid by some drunken Scots.  This is not the first or last time in the series Claire is nearly raped.  She is rescued by Dougal but he steals a kiss (which sounds lighthearted but isn’t) and warns her to be careful or someone will want more.  Claire first slaps him and then hits him with a nearby chair, knocking him out cold.  Good work!

She heads for the stable, looking for the horse, but steps on Jamie who is napping there.  He guesses instantly what she is up to but tells her she wouldn’t have got far with all the MacKenzies after her.  He says he’ll bring her back to the castle, and Claire reveals her disappointment that her plans are being thwarted, plus tells him she can’t go back because she walloped Dougal with a chair, which makes Jamie laugh.  Then they are discovered by some drunk clansmen who realize Jamie should be inside the Great Hall and drag him inside to get ready.  Angus (surely Rupert is passed out somewhere?) appears in time to help Jamie defend Claire’s honor and hands him a MacKenzie brooch which Claire translates (forgetting she shouldn’t show off her education).  Jamie looks at it and says it’s not his clan, that his clan’s motto is Je suis prest (I am ready).

Claire doesn’t realize it but Jamie has been strategically avoiding the Gathering because he does not want to pledge his loyalty to Colum.  As popular nephew to the ill Colum, Jamie could be considered a possible heir and he knows that Colum and Dougal want Colum’s son to succeed him.  Jamie is afraid that if he doesn’t take the Oath, his uncles will think he is disloyal but if he does, the rest of the clan might think he is jockeying for position (think Scott Brown moving to New Hampshire to run for office) and his uncles will have him killed. Claire realizes it is her fault Jamie left the safety of the stables and is now forced to make a strategic decision.

Jamie magnificently hedges his bets by making a pledge of loyalty to his own clan, but swearing his obedience is to his kinsmen, the MacKenzies.  While everyone in the Hall holds his or her breath, Colum decides to accept the pledge and Jamie drinks up.  And finally it's party time!  Stomp your feet, clap your hands, everybody ready for a barnyard dance!

The next day is the Hunt, and although Claire makes fun of all the men pursuing one little pig, what we see is an impressively rendered boar and I wouldn’t go anywhere near it!   Claire is not as lucky – she nearly gets trampled by the boar but Dougal shoots it just in time.  However, there is a casualty, which Claire's healing skills can't mend.  She and Dougal keep Geordie company as he slowly dies.  Dougal is grim at losing a friend but suddenly all the men are playing field hockey and he grabs a stick and joins in (okay, it turns out to be an obscure Scottish game called shinty) .  The tension and rivalry of the oath-giving seem to return and Dougal goes after Jamie aggressively.  As a former field hockey player myself, I was taken aback by their rugby-like approach to the sport but the ultimate result is that Jamie is victorious!  Take that, Dougal!

Afterwards, Dougal comes to visit Claire in her scullery (as Jamie predicted, if Dougal remembers about being hit by the chair, he is not going to admit it).  “You’ve seen men die before, and by violence,” Dougal observes, and Claire admits it.  He thanks Claire for helping Geordie die peacefully.  Then he tells Claire he is going to take her with him on a trip to collect the rents from Colum’s tenants because a healer might be useful.  “We leave at first light,” he says.  Perched (presumably) on Brimstone, Claire leaves Castle Leoch with Dougal, Jamie, and what look like Rupert and Murtagh (wearing an elegant coat with furry cuffs and collar – thanks, Mrs. Fitz!), and although she doesn’t know where they’re going she is secretly rejoicing because she figures it must be closer to the Standing Stones than staying at the Castle as Colum’s guest.

What’s Important About This Episode:
·        Geillis continues to be suspicious of Claire
·        Jamie prevents Claire from escaping and she prevents Jamie from avoiding the oath-taking to Colum
·        Jamie shows great diplomacy in his pledge to Colum, and we learn that he is taken seriously as a young warrior by the Clan.  Murtagh reminds Claire that Jamie has a price on his head.
·        Dougal begins to take Claire more seriously after the shared death of Geordie
·        Leaving the Castle may give Claire an opportunity to escape