This is a somewhat depressing episode in which Claire spends weeks on the road with Dougal and his occasionally merry men in what appears to be an annual trip to collect rent from the MacKenzie tenants.  Claire had hoped she would get an opportunity to escape to the Standing Stones of Craigh na Dun but she is still under close guard. Would you want to spend the night in this pitiful tent with no running water and half cooked animal legs to nibble?  Claire escapes down to the water and wistfully recites: 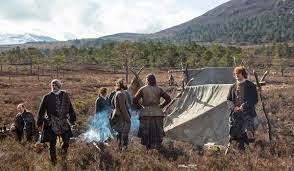 Absence, hear thou my protestation
Against thy strength,
Distance and length:
Do what thou canst for alteration;
For hearts of truest mettle
Absence doth join, and time doth settle.

An older man joins in to recite the words with her and Claire meets Ned Gowan, an Edinburgh lawyer who joined the MacKenzies to seek more adventure than a traditional city legal practice provides (isn’t there a clan that will take me and my legal skills?).  Claire recognizes a friend and possible ally, and immediately treats him for asthma - successfully, of course.  By the way, Claire thinks John Donne is the author of this poem but it is also attributed to John Moses Hoskyns.  This ambiguity is what happens when you add something that isn’t in the book and expect a History and Literature major not to look up the poem!

Jamie tries to cheer Claire up from her depression: she doesn’t seem to mind the endlessly crude conversation of the Scots but she is lonely and resents being distrusted.  She worries when she sees poor villagers tithing to Colum and leaving themselves with very little, and she also begins to suspect Dougal is diverting funds to himself.  At one village, she befriends a group of women who are singing merrily while softening wool with urine.  She asks the women about Craigh na Dun and finds it is a three-day journey.  Suddenly, Angus bursts in and drags her away – I can finally tell Angus and Rupert apart: Angus is meaner and uglier.   Claire protests his rough treatment and tries to remove a goat from the MacKenzie tribute so a baby doesn’t go without milk.  This does not go over well with Colum. 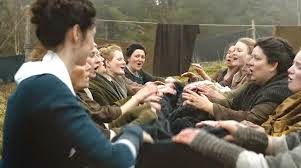 Suddenly, a young Englishman appears out of nowhere and asks if Claire is all right.  Colum says she’s their guest and Angus insults the man until he realizes he is outnumbered and retreats.  It is never explained why he is hanging out in this Scot settlement by himself or why the locals didn’t warn Colum he was a Redcoat but the viewer sees him put on his red uniform coat so we know what he is when he disappears.

The road trip assumes a routine in which they visits villages and receive rent in various forms in the daytime and Colum holds court in pubs at night.  Claire resents the fact that she doesn’t understand Gaelic so she doesn’t know what he is up to but each night Colum rips Jamie’s shirt off to reveal the scars and she knows Jamie does not like anyone to see his back (see episode 2).

Best line of the night:

Ned Gowan:  You have a good head on your shoulders and a tongue for argument as well.  You’d make a fine advocate yourself.  It’s a pity they don’t allow women to practice law.

Ned: It will be a few centuries before that happens!

The MacKenzies come across a house being burnt down by the Watch, and Claire learns the owner was suspected of being a traitor.  She is upset that the MacKenzies seem to be looting and says she won’t eat stolen food.  Angus pulls a knife on her for the insult and Jamie has to calm him down.  Jamie then tries to talk some sense into Claire, tells her not to judge them because she doesn’t understand everything that’s going on.  Dougal seems to be getting more and more irritated that he brought her along.  Eventually, Claire picks up enough Gaelic to figure out that Dougal is raising money for the Jacobite cause, to fund an army to bring Bonnie Prince Charlie to Scotland to oust the Hanoverians.   Long live the Stuarts!  She has a flashback to Frank and Reverend Wakefield discussing the Jacobite uprising, and realizes Dougal’s machinations are political, not criminal.

Dougal finally asks Jamie if he is committed to the Stuart cause (while Claire eavesdrops) and points out that a Stuart king would help him to save his neck (because the British put a price on his head).  Jamie retorts that his neck is his own concern, as is his back.  “Not while you travel with me, sweet lad!” Dougal tells him, clearly planning to go on using his scars to show the brutality of the English.  Jamie is furious and stomps away but seems to soften when he encounters Claire.  He's mumbling, which is a bad habit of his, but I think he tells Claire each person needs to determine for himself what’s worth fighting for.

Claire now has a different problem: she knows the rebellion will not nly be unsuccessful but also disastrous to the Scots; however, there is no way to alert them without their thinking she is crazy or a witch.  At one point, she tries to warn Ned Gowan, the most sensible member of the group but he dismisses her warning.  The journey takes a dark turn when they discover two Scots who have been nailed to crosses by Redcoats and left to die as alleged traitors.

That night, the MacKenzies stay at an inn and Claire actually gets to sleep in a real bed, but she hears a noise outside her room and opens the door, accidentally stepping on Jamie (again) and wonders what the hell he’s doing.  He reveals that he is sleeping there to protect her from drunks.  Once  she understands, she urges him to come sleep inside the room (on the floor) but that shocks Jamie, who says, “Your reputation would be ruined!”  Claire thinks this is silly when she’s been traveling with these men for weeks without a chaperone and persuades him to at least take a blanket.   They exchange a meaningful look before she firmly closes the door.  Gallant Jamie!  This is the best part of the episode.

There is a brawl in the tap room the next morning and it isn’t until Claire is mending the men’s boo-boos later that Murtagh tells her they were fighting to defend her honor!  This is a turning point in her relationship with the men, and she later makes a lewd joke about Rupert which the men love.   As the group passes over Culloden Moor, Claire has another flashback to Frank telling her about the extreme loss of men in 1746 and how the British subsequently ended the Highland way of life by disbanding the clans and forbidding the wearing of kilts.   Claire knows the battle of Culloden is three years away and wonders how many of the men she’s with now will die there.

She goes down to the river to wash and Dougal follows her and demands (again) to know who she really is.  She says she isn’t a spy, and while they are arguing, the young Englishman she met earlier appears, armed and in his uniform, with several other English officers.

He says to Claire, “Once more I ask you, is everything all right?” and introduces himself as Lieutenant Jeremy Foster.  He’s not in the book but there is something sweet about him and his appearance is very dramatic.  Dougal says the lady is none of his concern and explains he is a big scary war lord and ignores the fact that he is outnumbered.

Lieutenant Foster asks Claire again, “Are you here by your own choice?” and while Claire tries to determine the best answer, the episode ends.

·        Claire’s improved relationship with Dougal didn’t last, and she is too willful to make an effort to get along with him – although she realizes this will hinder her escape

·        Dougal is using Jamie’s scars as shock value to persuade Scots to give money to the Jacobite cause, ignoring Jamie’s feelings (but are you allowed to have feelings when you are a warrior?)

·        Jamie is not committed to the Jacobite cause even though he has more cause than Dougal to hate the British.  Or is it that he wants to make the choice, not be Dougal’s pawn?

·        Despite the dreariness of the extended road trip, there is growing friendship between Claire and Jamie and growing sizzle