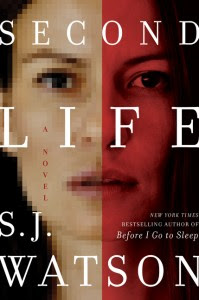 Plot: From the New York Times bestselling author of Before I Go to Sleep, a new psychological thriller about a woman with a secret identity that threatens to destroy her.  How well can you really know another person? How far would you go to find the truth about someone you love?

When Julia learns that her sister has been violently murdered, she must uncover why. But Julia's quest quickly evolves into an alluring exploration of own darkest sensual desires. Becoming involved with a dangerous stranger online, she's losing herself . . . losing control . . . perhaps losing everything. Her search for answers will jeopardize her marriage, her family, and her life.

This is a tense and unrelenting novel that explores the hidden lives led by people with secrets; and the dark places in which they can find themselves. Second Life is a nerve-racking work of suspense that is uncomfortable to read.

My thoughts: This was a fast but very disturbing read. I didn’t exactly enjoy Before I Go to Sleep but thought it was fairly well done amnesia story. This book is very different. First of all, it is unbelievably melodramatic and written in the present tense, which I find pretentious (I eventually forgave Hilary Mantel). The plot was not convincing (in fact, it was completely ridiculous) and I became quite tired of reading about heroine Julia’s self-destructive behavior which begins when she decides to investigate her sister’s murder (or at least that is how she justifies her obsessive behavior to herself – it is soon apparent she is bored with her life and yearns for the artsy life she led in Berlin with her first serious boyfriend, Marcus). However, from this point, the book just provided one cliché after another: illicit and violent sex, drugs, alcohol, mysterious muggings, online romance, and secrets from the only people who love her.

Julia does nothing to comfort her son (actually her nephew but she and her husband adopted him) for the loss of his biological mother except cause him more stress. In terms of characters, I did not like any of them (this doesn’t always prevent me from enjoying a book but it was an obstacle here). I did guess wrong about who had fathered Connor but most of the plot developments were extremely predictable. And yet ... it was genuinely chilling at times. There were several moments when I shivered and was glad I wouldn’t meet any of these characters in a dark alley.

Source: I received this book from TLC Book Tours but all thoughts and opinions are my own.  To read other reviews, click here.
Posted by CLM