The Case of the Invisible Dog (Book Review and Giveway) 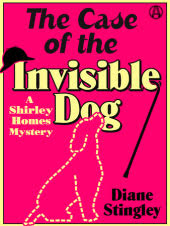 Plot: Down on her luck actress Tammy Norman has given up on Hollywood and returned home to North Carolina but even there she is unsuccessful at getting and keeping a job.  When she responds to a newspaper ad for an assistant, she finds herself working for eccentric Shirley Holmes, who believes she is the great granddaughter of the famous sleuth.  Alas, Shirley does not share Sherlock’s acumen and Tammy finds herself apologizing to everyone in sight for the tone deaf escapades of her new boss, but it’s better than being unemployed…
Audience: Fans of quirky mysteries such as those by Diane Mott Davidson

What I liked: I really enjoyed the original concept and the character of Shirley – she is so articulate and yet so clueless, with delicious potential for future books.  Shirley really needs Tammy as her Watson, and I think there’s a lot of potential for their collaboration.    The mystery of the invisible dog is just one of many mysteries for this duo to untangle.  Tammy needs to stop complaining and embrace the partnership in order for this series to develop.

What I disliked: The story wasn’t as funny as I was expecting and the mystery was slow to develop but sometimes book 1 in a series takes a while to get going as it sets up characters and setting.  Note to author/editor: I read a wide variety of mysteries but some of my friends who only read cozies do not want to see the f word, and I don’t think it was really needed in this story.

Source: I was invited to participate in this blog tour by TLC Book Tours.  Check out other stops on the tour and enter below to win a copy of this ebook and a $25 eGift card to the ebook retailer of your choice.
a Rafflecopter giveaway
Posted by CLM

Shirley is QUITE a character, isn't she?!