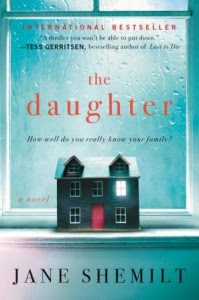 Plot: How well do you really know your family? Jenny thinks she has the perfect life, with a busy medical practice in Bristol, England, a successful surgeon husband, and three teenagers. Of course, she’s busy and tired, but isn’t everyone? Then her daughter Naomi fails to come home one night after starring in West Side Story, and Jenny and her family will never the same again.  Jenny looks at everyone around her with suspicion, blames herself for failing to notice changes in her daughter’s behavior, and can no longer handle everyday life.  She realizes that she will never be able to cope with Naomi’s disappearance until she knows what happened, but her search into Naomi’s last months reveals a girl Jenny barely recognizes.

What I liked: The book is well written and deliberately paced, moving back and forth from the days before and just after Naomi’s disappearance to a year afterwards.   Told from Jenny’s perspective, the story begins with what seems like a reasonably happy family but, once Naomi is gone, their apparently perfect life is over, and the tension and suspicions slowly escalates to a controversial conclusion.  The author is especially skillful depicting some minor characters: Jenny’s kindhearted partner in her medical practice, Michael the police/family liaison officer, and a dreadful mother whose daughter was Naomi’s friend – neither mother nor daughter is very willing to help with the investigation.  Parts of the book were very painful to read.

I found Jenny and her family all quite unlikeable.  I don’t require engaging characters in order to enjoy a book but their lack of appeal kept me at a distance and prevented me from being very emotionally involved in Naomi’s disappearance.  To me, that is usually where Jodi Picoult is so successful: even with some of her more outlandish plots, I am usually sufficiently captivated by the people in jeopardy that I can’t stop reading.  Here, I felt sorry for Jenny but I didn’t agonize over her pain.  On the other hand, I did care what happened to her and am indignant on her behalf that the she had very ineffective investigators on the case, not to mention a useless husband.  Overall, an entertaining summer read, helped by the fact that the author is a doctor herself.

Source: I received The Daughter from the TLC Book Tours and invite you to visit the tour to read other reviews of this book.