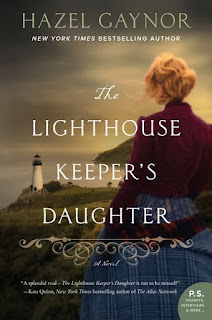 Plot: From The New York Times bestselling author of The Girl Who Came Home comes a historical novel inspired by true events, and the little-known female lighthouse keepers of the past two hundred years.

“They call me a heroine, but I am not deserving of such accolades. I am just an ordinary young woman who did her duty.”

1838: Northumberland, England. Longstone Lighthouse on the Farne Islands has been Grace Darling’s home for all of her twenty-two years. When she and her father rescue shipwreck survivors in a furious storm, Grace becomes celebrated throughout England, the subject of poems, ballads, and plays. But far more precious than her unsought fame is the friendship that develops between Grace and a visiting artist. Just as George Emmerson captures Grace with his brushes, she in turn captures his heart.

1938: Newport, Rhode Island. Nineteen-years-old and pregnant, Matilda Emmerson has been sent away from Ireland in disgrace. She is to stay with Harriet, a reclusive relative and assistant lighthouse keeper at Rose Island, until her baby is born. A discarded, half-finished portrait opens a window into Matilda’s family history. As a deadly hurricane approaches, two women, living a century apart, will be linked forever by their instinctive acts of courage and love.

My Impressions: Hazel Gaynor is an author who has been on my radar for some time so I was delighted to have the opportunity to read her new book.   I am sure I am not the only person who is fascinated by lighthouses and who has longed to spend the night in one.  I did not romanticize or overlook the loneliness or the danger involved in such a vocation and this book does neither, while making it clear the elements are the enemy:

. . . I begin my battle with the sea, pulling first on the left oar and then on the right, sculling forward and then backward in a desperate effort to stop the boat being smashed against the rocks while Father assesses the situation with the survivors.  The minutes expand like hours, every moment bringing a bigger wave to dowse me with frigid water and render me almost blind with the sting of salt in my eyes.  Mam’s words tumble through my mind.  A storm should be respected, but never feared.  Show it you’re afraid, and you’re already halfway to dead.  I rage back at the wind, telling it I am not afraid, ignoring the deep burn of the muscles in my forearms.  I have never felt more alone or afraid but I am determined to persevere.

The courage of 19th century Grace puts 21st century not-physically-very-brave me to shame – we all hope we would have the courage to be selfless and save others in an emergency but it's harder to live up to such challenges!  Grace does not hesitate, despite extreme personal danger, and her efforts are recognized far and wide.   She is tested in a different way afterwards, when her privacy is gone and she is acclaimed, resulting in publicity that threatens her way of life.

A descendant of one of the people Grace rescues is the other protagonist of the story, a 20th century heroine with her own lighthouse story, which reveals the effect of the past on her life.   That portion of the book is also vividly depicted but I will admit that I was fascinated by Grace Darling’s story!  I loved the beautiful and evocative cover, and look forward to more books by this talented author.