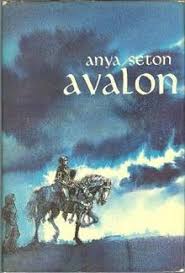 Avalon is the eighth of twelve books that are part of my 2019 TBR Challenge, inspired by Adam at Roof Beam Reader, to prioritize some of my unread piles. It is one of Seton’s lesser-known titles and I have owned it for years without getting around to reading it.

Plot: When Rumon, a young man of noble birth, descended from Charlemagne, leaves his home in Provence to seek the source of his visions, his goal is Avalon, the legendary island featured in Arthurian legend. Instead, he is shipwrecked in Cornwall, where he meets a girl called Merewyn, whose father was killed by Vikings before she was born. Promising her dying mother he will deliver Merewyn to an aunt, an abbess at a convent, they set off to the court of King Edgar. The politics of court and of the church, anchored by Dunstan, the Archbishop of Canterbury, provide the counterpoint to the odd friendship that connects Rumon and Merewyn. Both young people are dazzled by Edgar’s queen, Alfrida, which prevents Rumon from recognizing Merewyn’s devotion as she becomes a young woman capable of great love. Because he alone knows the secret of her birth, he considers her unworthy. However, once Rumon realizes that he cares for her, he pursues Merewyn, making a perilous journey across the Atlantic to Iceland, believing he needs to rescue her.

My Impressions: This is another compelling historical novel by the talented Anya Seton and, as with Dragonwyck and My Theodosia, it provides a vivid picture of a little known period, including some real characters, such as St. Dunstan, Leif Erikson, and Ethelred the Unready.  Seton has an uncanny
ability to bring history to life, although there are fewer appealing characters and what seems like more violence than in Katherine, one of my (and many others') all-time favorites. Still, it is a great read for historical fiction fans and I could not put it down. As usual, Seton’s sweeping narrative carries the reader along, even when the main protagonist is considered a wimp by reader and Vikings alike:


“And I think that Rumon will always be wanting what he cannot find, and that if he finds what he thought he wanted he will be disappointed. As he is now.” She tried to smile but tears came into her eyes...

Does a real hero always know what he wants? Merewyn’s observation is accompanied by the Vikings’ contempt for someone who won’t fight and who “sounded abject” when he spoke to a mere woman. Rumon is a "Searcher" of visions but is not capable of seeing beyond his own nose.   Still, I give Rumon credit for a three-year quest to find Merewyn, although his overweening pride prevented him from appreciating her when she was close at hand.

Off the Blog: This review is a break from a weekend creating what my History of Children’s Literature professor calls a LibGuide. I chose children’s fantasy literature as my topic and will add a link once complete.