Diary of a Provincial Lady by E.M. Delafield #1930Club

The 1930 Club is a meme started by Simon from Stuck in a Book and Karen from Kaggsy's Book Ramblings that explores a specific year of published books.  This inspired me to chose a book I had always meant to read, set in one of my favorite fictional places, a small English village. 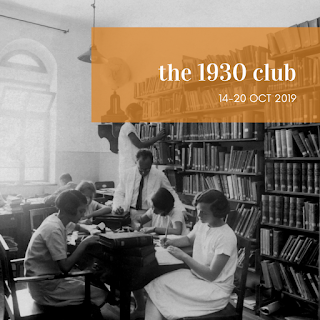 Plot: The book is a somewhat autobiographical diary of the life of an upper-middle-class Englishwoman living mostly in a Devon village in the 1930s, with a grumpy husband, two young children (one of whom attends boarding school), a large awkward house, a number of servants, and many acquaintances (although only one real friend).

My Impressions: This was amusing but not nearly so charming as any D.E. Stevenson in which the heroine is trying to make ends meet. Stevenson takes seriously the agonizing economies one must sometimes undertake while imbuing them with an appealing lightheartedness. The Provincial Lady is so understated that only the reader gets her jokes. She can be very funny, less about her writing ambitions than about her interaction with neighbors and her endlessly demanding and annoying family and servants. Her observations of village life are full of witty observations, although occasionally she remembers she does not approve of gossip at all! In addition, like all of us, she rarely thinks of a good comeback until it is too late (or is too polite to utter it) (this phenomenon inspired the name of my blog).

Still, some of the aspects of her life are not altogether humorous. Why must she agonize about every penny, including pawning her great-aunt’s ring frequently, when her husband seems oblivious to their precarious financial situation? Couldn’t she economize by reducing her household staff? I know the answer is no, but for example, couldn’t she teach her child herself or send her to the local primary instead of having a live-in French governess for an (I think) six-year-old? Is she self-deprecating about her finances because she is amused by the situation or because it is so dire she can only cope by joking about it? Usually, I greatly enjoy the social satire of a book like this, set in a gossipy English country town, but the heroine’s wryness seemed more exhausting to maintain than it would have been to learn how to cook! Not to mention, how disappointing it would be to have multiple servants, yet for them to be as disobliging as those in this household! I want Carson and Anna or no one!

Off the Blog: I have been laboring all day on a take-home cataloging midterm – torture!

Source: Library copy.  There have obviously been a lot of attractively packaged editions over the years.  My library copy included the original illustrations by Arthur Watts, an artist whose work also appeared in Punch.  He was known for his gently satirical observations of class distinctions and his black and white drawings add greatly to the book.

Sorry that it didn't live up to your hopes. If you can bring yourself to read the next in the series, it's my favourite of them!

It's interesting that you mention D.E. Stevenson - because I'm pretty sure the Mrs Tim books, at least the first half of the first one, are shockingly ripped off from the Provincial Lady. The PL will always have my heart!