Three Women by Lisa Taddeo was Kate’s starting book this month.  Unusually, I hadn’t heard of it and when I took a look it was definitely not my thing.   However, it made me think of my first book, which is about three women living in close quarters after WWII: 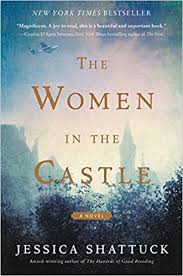 The Women in the Castle by Jessica Shattuck was published in 2017.   This is a historical novel written by a Boston-based author, set primarily in post-World War II Germany.   Heroine (albeit flawed) Marianne takes in widowed survivors of resistors and their children, trying to preserve a new generation for the country in a castle that is barely functional.  I think I liked this because it showed a very different perspective on WWII historical fiction I have long enjoyed (I tend to read books set in England or France).   I realized I could have a castle theme, and that brought me to my second book with another falling-apart castle full of women: 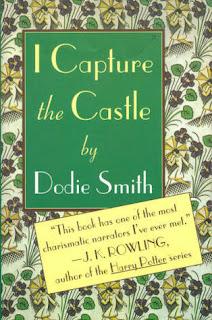 I Capture the Castle by Dodie Smith (1949).   Aspiring writer Cassandra and her family live in a dilapidated castle and are living in genteel poverty because their father cannot write a successor to his long-ago bestseller and obviously can’t do anything as plebeian as getting a job.  But everything changes for Cassandra and her sister Rose when two attractive young men come to town.    Somehow I missed this coming of age story when I was growing up and although I enjoyed it as an adult, I think I would have liked it more as a teen.   I do enjoy the famous first line and I really enjoyed the movie.   Did you see it?   Here is a link to the trailer.   My third book involves a castle that is not falling down but is constantly moving:

Howl’s Moving Castle by Diana Wynne Jones (1996).  A mysterious castle appears in town, which belongs to the Wizard Howl, who is rumored to suck the souls of young girls. Surprise! He is actually young and handsome, although very annoying.  Sophie Hatter, the intrepid oldest sister, is under a spell for most of the book, but that barely slows her down, even though believes.  A real gem!  The movie is a 2004 Japanese animated, fantasy film written and directed by Hayao Miyazaki. 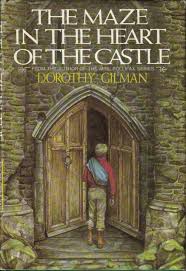 The Maze in the Heart of the Castle by Dorothy Gilman (1983).  Gilman, known for her teen novels before she reinvented herself as the author of the Mrs. Pollifax (1966 and on), middle-aged housewife turned CIA agent, and other mysteries, first mentioned this book in an adult standalone, The Tightrope Walker, a really unusual and appealing novel.  Clearly, she fell in love with the description of Maze and then wrote it! It works by itself but I highly recommend The Tightrope Walker too, in which shy heroine Amelia Jones searches her past for clues to a mystery that terrifies her . . . The Maze in the Heart of the Castle is a middle school fantasy about an orphan on a quest to understand the loss of his parents.   This is a sad castle so I picked a more humorous one for my fifth book: 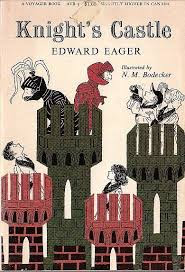 Knight’s Castle by Edward Eager (1956), Illustrated by a favorite, N. M. Bodecker.  This follows Magic by the Lake and is about the offspring of the children in Half Magic.   Roger and Ann, visiting their cousins in Baltimore, are taken to see the Elizabeth Taylor movie of Ivanhoe and are enthralled.   They start playing with the castle Aunt Katharine gives Roger and new soldiers from their Uncle Mark, and then the soldiers come to life and they find themselves back in the days of Ivanhoe and Bad King John . . . English friends: this is better than The Return of the Twelves.  Knight's Castle led me to my sixth book, another favorite:

Shadow Castle by Marian Cockrell (1945). In the middle of a deep forest is an enchanted valley and a castle where only shadows live, shadows of kings and queens who have waited for hundreds of years for the spell cast upon them to be broken.   One day, a girl named Lucy follows a little dog through a tunnel into the valley and meets the mysterious red-haired Michael, who takes her into the shadow world to meet Prince Mika and his mortal wife Gloria, their children and their children's children, and learn the magic that will lift the spell.   I return often to this gem of a book, and cherish my mother’s copy, which was published during WWII on very-thin paper.   Happily, an expanded version was made available not long ago by the author’s daughter, also a writer. 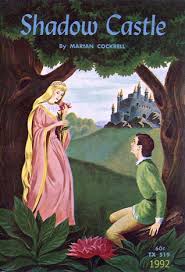 So we started off *in* WWII and concluded with a book written *during* WWII.  Next month, Kate says the launch book will be Alice in Wonderland.  I have very pleasant memories, not only of reading it but my grandmother gave me LP versions of Alice and Through the Looking Glass I listened to often as a child.

To my surprise, I read today that Jojo Moyes is in the middle of Three Women, so *someone* is reading it!  I was also startled to read her new book is set in Depression-era Kentucky, which seems a very odd setting for her to choose.

So cool, I love your focus on the castle, AND that you mention Miyazaki!! As I explained in my September wrap, I totally fell in love with his work: https://wordsandpeace.com/2019/09/30/2019-september-wrap-up/
Thanks for pointing to that awesome youtuve video and channel.
And here are my chains for today: https://wordsandpeace.com/2019/10/05/six-degrees-of-separation-from-three-women-to-a-riddle/

I think I should read The Women in the Castle because I have read all the others! Shadow Castle, now that is a blast from the past -- I also read a copy handed down from my mother. Sadly, I don't know what happened to it ... I hope one of my siblings hung on to it for their kids.

I have read I Capture the Castle, but I haven’t seen the movie yet.

Thanks for sharing your chain,

I love castles, so I think your chain is great! I've read I Capture the Castle, but like you I missed it when I was growing up, and think I would have enjoyed it more as a teenager. I've read some of Diana Wynne Jones's books but not Howl’s Moving Castle - it sounds like I should.

Well, that was an interesting twist.

Yours is the most original take on the topic so far! I enjoyed both The Women in the Castle and I Capture the Castle, but don't know the others at all. Nice work!

I have had I Capture the Castle on my TBR list for sooooo long! Thanks for th reminder.