Title: The Goldsmith’s Treasure
Author: August Šenoa (1838 – 1881)
Translator: Neven Divjakinja
Publication: Spiritoso (Zagreb), hardcover, English edition 2015 (1871)
Genre: Historical Fiction
Setting: Zagreb, 1574-79
Plot: This is a Croatian story of forbidden love between Dora Krupiceva, the Goldsmith’s daughter, a beautiful and devout young woman, and Pavao Gregorijanec, willful son of Lord Stjephko. Grga Cokolin is a drunken barber (rumored to dabble in the dark arts) who yearns for Dora but her father does not approve of him and diplomatically says Dora is too young to marry. Rejected, Grga plans revenge on Dora, her father, and kind Magda who raised Dora after her mother died. At a public gathering to burn a Turkish priest, Dora is nearly trampled by the crowd but Pavao rescues her and immediately falls in love. His father is furious at a romantic entanglement with a commoner and sends Pavao to visit a rich widow he considers a more suitable match. Unfortunately, this means Dora is vulnerable and alone when the jealous barber spreads rumors about her. Her father is shamed, believes the calumny, and exiles her to Lomnica to work as a servant.

Jerko, an unfortunately named mute, follows Pavao to Samobor where the lovely widow Klara is trying to seduce him, and somehow manages to gasp out that Dora is in danger. He explains to Pavao that the barber is conspiring with Pavao’s father to kidnap and dishonor Dora on her way to Lomnica. Jerko also reveals that he is Pavao’s half-brother: he is the son of a serf who was raped by Lord Stjephko and was brought up pretending to be mute to protect himself from his vengeful father. Jerko was under an oath not to utter a human sound unless he found himself in mortal danger but he also loves Dora so is determined to help Pavao rescue her. Pavao is able to thwart the kidnapping and hangs the perpetrators although Grga escapes. Pavao confronts his father for plotting to abduct and rape Dora; his wretched mother Marta dies during the encounter. 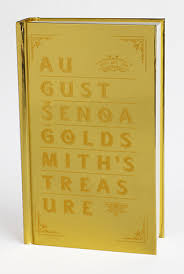 The politics were hard to follow. Croatia in the 16th century was part of the Habsburg empire and was governed from Prague. The Croatian nobles dislike their overlords and hate the Turks, who, just as now, are menacing everyone in sight, especially my Hungarian ancestors. Lord Stjephko is made Vice Ban (Assistant Viceroy) of Croatia and uses his position to abuse Dora’s father. Grga appears in time to make trouble, helped by the rich widow Klara who marries the Ban, Baron Ungnad, but is so infatuated with Pavao that she vows to destroy Dora.

My Impressions: When my classmate Lidija told us that The Goldsmith’s Treasure was legendary as the first historical novel published in Croatia and only recently translated into English, our book group was intrigued. The editor explains that Šenoa was extremely influenced by Dickens. The translation is poor and very melodramatic, but the reader is still able to appreciate the (albeit over-the-top) characters and appeal.  The descriptions of Zagreb are vivid and perhaps the best part: "By telling a story about its citizens, Šenoa also told a story about Zagreb itself (10)."  Several of the key landmarks in the story are still there and just waiting for a visit.

Favorite Quotes:  There have always been forbidden loves, but there has never been one that could be stopped (9).

It is well known that all women who are neighbors share a sincere affection toward one another. That is, if they do not gouge each other’s eyes out over the years (99).

"My heart got the better of me. My heart, Dora dearest – which holds a precious treasure inside – your name (114)."

"You’ve already saved my only daughter twice . . . [c]ome as you please, enjoy Dora’s company, but only in my presence, because, as you, noble gentleman, protect your lineage like a precious flower, so must we townspeople protect the health trees of our families from burrowing worms (205)." 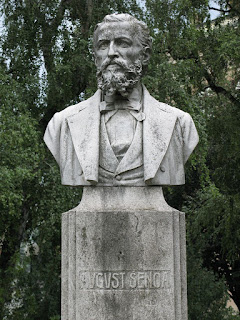 The empire is in a terrible state! Rivers of Christian blood flow throughout Hungary; a crescent moon flies over Budapest. Bosnia suffocates under Turkish rule. Eastern Slavonija slaves away, torn away from its motherland (235).

“Oh Pavao, why were we born as we were? You a lord and I a common girl. Why was I not born a lady and you a pauper? Why did we ever meet? . . . I would not give you up for all the gold in the world.”

“Enough, my lady!” The young man got to his feet, his face red with anger. “You are not quite well. You seem feverish. But to break your fever, I shall tell you this: Pavao Gregorijanec is a noble, a soldier, and is betrothed to another! . . . These three things prevent me, my lady, to fall victim to your lust.”

Source:   Lidija brought six copies of this book from Croatia on her last visit for our book group to read, and has promised traditional food when we meet at her home to discuss it next month. I hope she produces some paprenjaci, the traditional Croatian cookies made by Dora’s godmother!
Posted by CLM