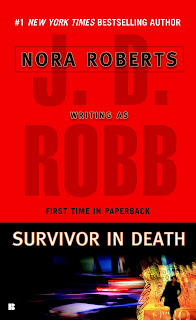 Plot: Lieutenant Dallas is called in to a particularly brutal murder of the Swisher family: all killed except 9-year-old Nixie who was out of bed and hid from the intruders.  Finding a terrified little girl in a crime scene brings back terrible memories of her childhood to Dallas.  Determined to protect her witness, she brings Nixie home with her, which is disconcerting for everyone.  With no DNA or clues, Dallas needs all the help she can get from the crew: Peabody, McNab, Feeney, Dr. Mira and, of course, the incomparable Roarke, in her unerring hunt for the killers.  This is the 20th book in the series.

My Impressions: I was working at Berkley when the In Death series was launched in 1995, more than twenty-five years ago.  I remember editor Lesley Gelbman telling the sales team that Nora Roberts was writing so fast she had decided to do a new series under a pseudonym.  This was about the time that Putnam started publishing Nora’s contemporary romantic suspense in hardcover instead of Berkley publishing as paperback originals.  When I heard it was a futuristic romance about a New York City policewoman I thought, this is not for me.  Thus, while I was a Nora fan, I didn’t get around to reading it for several years, which was a waste of the free copies I could have had – by then I was working elsewhere.  In the first book, the mid-21st century gadgets and hero/suspect Roarke got somewhat more attention from the author than Eve Dallas herself, but both Roarke and Eve turned out to have complicated and dark backstories., which are revealed gradually as the series progresses (well, you have to do something to keep a series fresh for this long!).

There has been a lot of publicity about the 50th installment – Golden in Death, which came out last month and I realized it had been quite a while since I had read any in this series, although I had continued to pick them up (I own 36 of 50), so I decided to start catching up.  I had mixed feelings about this audiobook.  Apparently, Susan Ericksen has done all the narration for this series but I thought she was shrill and I imagined Dallas sounding more like Lauren Bacall.  Her voice for Roarke seemed just right, however.  Eve experiences a number of flashbacks to the violence that destroyed her own childhood and her inability to relate to Nixie was convincing, although in real life no one would expect a homicide detective to bond with a child while in the midst of solving active murders. Naturally, Nixie idolizes Eve, who rescued her from near death but I was glad there was no thought of adopting Nixie, yet Roarke does bring up the issue of children:


He took her hands, kissed them. “I want children with you, Eve.”
The sound she made brought on a quick and easy grin. “No need for the panic face, darling.  I don’t mean today or tomorrow, or nine months down the road.  Having Nixie around’s been considerable education.  Children are a lot of bloody work, aren’t they?”

I am reminded that when Nora’s first Putnam hardcover hit the NYT bestseller list, there was a guy in Putnam sales named Mike Brennan who said to us, “Now she’s a legitimate bestseller!”  This made us so mad because it was her various paperback reps at Harlequin, Bantam, and Berkley who had worked so hard on building her sales in paperback, which got her into hardcover.  In my brief contacts with Nora, she seemed very practical and too down to earth to share that snobbery.

I can't help thinking Roarke will be one of Nora's lasting achievements!  Her heroes are mostly of a type but there is only one Roarke and he is both fierce and sensitive, attractive, crazy about Eve, and able to provide anything she wants (except freedom from her past).  In the last book, he desperately wanted to destroy those who knew she was being abused by her father and let it continue because her father was a source.  Eve told him that it would destroy her if he killed for her sake.   Reluctantly, he promised to step down.

Source: Although I enjoyed this on audiobook from the library, I actually own the hardcover. 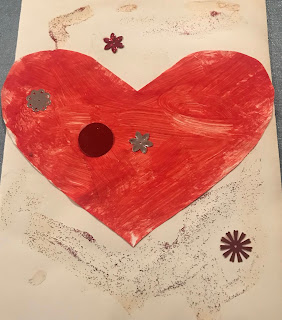 Off the Blog: Look at the Valentine I found when I looked inside my copy!  The artist is now a college graduate, which shows how long it has been since I looked at this series. 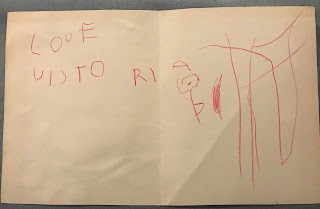