The Hunting Party by Lucy Foley, a whodunnit set on an isolated Highland estate, cut off by snow 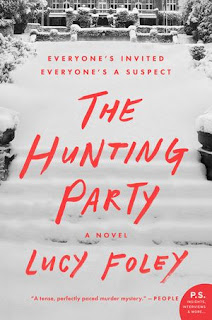 Plot: A group of friends in their early 30s book four days at a winter Highland wilderness, Loch Corrin.   It’s a chance to relax together and celebrate New Year’s Eve.   Miranda and her husband Julien, Samira and her husband Giles, Mark, Katie, and Nick have been friends since they were up at Oxford.  Samira and Giles now have baby Priya, Nick has an American boyfriend Bo, and Mark’s competent girlfriend Emma has organized this trip, in part to be accepted by his friends.  Heather, the manager, and Doug, the brooding gamekeeper, have secrets of their own that brought them to the back of beyond.  The estate, while beautiful, is very isolated and cut off from the world once it begins to snow and the guests begin to quarrel – and then a guest is murdered . . .

My Impressions: This suspense novel is a modern take on the classic country house mystery.   Such mysteries were a popular genre of English detective fiction between the First and Second World Wars: set in the homes of the English upper class and often involving a murder where the guests – and the killer - were isolated by a snowstorm, as here, or a manmade contrivance.  Usually, the detective arrives to analyze the scene, preventing the suspects from leaving until he (or occasionally she) has solved the murder.   Here, the detectives cannot reach the scene due to bad weather so the characters are on their own to figure it out the menace or to die trying.

This was a fast and entertaining read.  I really enjoyed the combination of reunion, with the friends who have outgrown each other and aren’t really friends, and the isolated setting, with the snow coming down as escalating emotions lead to murder.  The story is told primarily in flashbacks, with the Scottish estate vividly depicted as background.  The reader jumps at every unexplained noise and wants to warn against walking around unaccompanied!  Everyone has a secret to protect or a motive to wish someone else ill, and the only flaw was that all the characters were fairly unlikeable.  I also enjoyed the brief glimpses of undergraduate life at Oxford.  I read so quickly I missed a couple clues although I did guess the killer.

Off the Blog: It’s been a bad month for Boston sports fans: first, we lost Mookie Betts to the Dodgers, then the Ivy League tournament was canceled, Tom Brady announced on Tuesday he is leaving the Patriots, and now we learned Chris Sale will undergo Tommy John surgery.  How are we supposed to distract ourselves from COVID-19?
Purchase Links: Barnes & Noble, IndieBound, Amazon, HarperCollins

Source: I received a review copy of this book from the publisher and TLC Book Tours.  Please visit other stops on the tour below:

I'm in the middle of this one, but now I'm going to slow down because I'm worried I'm missing clues! Thank you for being on this tour. Sara @ TLC Book Tours

The description actually reminds me of Rosamunde Pilcher - September and Winter Solstice.