Victory by Susan Cooper, a timeslip story about a ship's boy at Trafalgar with Admiral Nelson 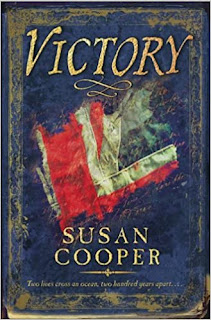 Plot: This is the story of two children, separated by two hundred years, and how each crosses the ocean to cope with a new life thrust upon them.  One child is Sam Robbins, a powder monkey aboard the HMS Victory, the ship in which Vice-Admiral Nelson will die a hero’s death at the Battle of Trafalgar in 1805.  The other is Molly Jennings, an English girl transplanted from London to the United States in 2006, fighting a battle of her own against loneliness and depression.

My Impressions: How did I miss this timeslip novel by Susan Cooper with so many appealing characters?   Molly’s life changed when her widowed mother met and married an affluent American, who was working in London.  At first, the blended family, which includes stepbrother Russell, five years older than Molly, manages to coexist, and Molly continues at her school while Russell continues at the American School in London, and a new baby, Donald, unites the family. But when her stepfather gets transferred back to the US, Molly finds suburban life in Connecticut alien and unwelcome, and is desperately homesick.  On a family trip to Mystic, she finds herself in a naval bookstore where she is drawn to a biography of Admiral Nelson, which she purchases and reads. Back in 1803, a farm boy, Sam Robbins, is rescued from an abusive father by a kind uncle, a rope maker in Chatham, who offers him a home.  For five days, Sam enjoys working at the Chatham Dockyard, and then he and his uncle are press-ganged on their way home and forced into the English Navy.  The depiction of life on board the Victory is vivid and fascinating, in all its brutality and not ignoring the rats (ugh).  Even the minor characters are carefully and well-drawn, particularly the crew of the Victory, Molly’s grandfather (a former Naval man), and, of course, Admiral Nelson himself.  But it is Molly’s instinctive interest in Nelson that connects these two children across the centuries. . .
An Author’s Note by Susan Cooper reveals that there was a 13-year-old Samuel Robbins on the HMS Victory as a ship’s boy and the names of all the crew are listed on the Victory’s website, www.hms-victory.com.  How fun it would be to go visit!  I have never been to Portsmouth, England, only Portsmouth, New Hampshire (a delightful town).  Cooper concludes by writing: “Sam Robbins’s encounters with Admiral Nelson are not historical; they came out of my imagination, and I loved writing them.  Perhaps I wrote this whole book only for the change of meeting one of my greatest heroes, just as I was lucky enough to meet Shakespeare in a book called King of Shadows and Merlin, long ago, in a sequence called The Dark is Rising.  Writers are fortunate people.”

Another Child at War: The Boston Globe recently had an interesting story about a black 8-year-old named David Debias who passed explosives to the thundering guns of the USS Constitution on the night of February 20, 1815.  He was a free man, fighting for his young country but may have come to a terrible end (worse than dying in battle).

Death of Nelson: I am sure if I were English, I would have learned in school about the friendship of Admiral Nelson and Admiral Hardy.  Instead, although I knew about Nelson’s heroism, I read about his scandalous affair with Emma Hamilton in a Jane Aiken Hodge and watched That Hamilton Woman with Vivien Leigh.  Eventually, I heard the famous phrase “Kiss me, Hardy!” in Code Name Verity but until now did not know that Hardy was Nelson’s dear friend and that Nelson spoke to him as he was dying in the Battle of Trafalgar.

More Susan Cooper: My review of Over Sea, Under Stone, which begins The Dark is Rising series