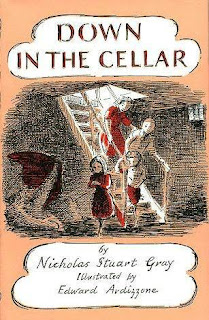 Plot: The Jefferson children - Bruce, Julia, Andrew, and Deirdre – are staying with their uncle, the quiet Rector of Farthingale, for three weeks while their parents are in New Zealand. They happily explore the house and the village but it is when they discover a forgotten cellar in the rectory that complications arise. A mysterious hiding place needs someone to hide – but when the children find a wounded young man and decide to protect him in their cellar, they are menaced by unnerving strangers suddenly interested in their activities and soon the police suspect they are up to something and try to make them reveal their secret. Can they and should they withstand the pressure?

My Impressions: I loved Nicholas Stuart Gray’s fantasies when I was growing up, especially Grimbold’s Other World, Over the Hill to Fabylon, and The Apple Stone – they were whimsical, full of humor and memorable characters, but did not come across this book, his first, until a few years ago.  Reading it made me acutely aware of how influential E. Nesbit (1858-1924) must have been to Gray (1922-1981), an English playwright and writer, primarily of children’s plays and books.  I thought I was the only one but it turns out there are other enthusiastic fans of Gray’s juvenile fantasies, including Neil Gaiman and Terri Windling.  I have not read The Stone Cage, which is some people's favorite.

Bruce, the oldest sibling, reminds me of Oswald Bastable.   Although conscious of his role as head of the family (so to speak) and seemingly self-confident, he is not as clever or as brave as he would like to be and it is often his twin sister Julia who provides practical leadership or his academically brilliant brother Andrew who comes up with a plan, while Deidre, the youngest, is just plain fey and sees thing that aren’t there – or are they? There is an element of the supernatural emanating from the villains of the story, the villagers who are pursuing Stephen, whom the children have secreted in the cellar, that is like the first book of Susan Cooper’s Dark is Rising series: the reader believes there is evil lurking but everything appears normal to all except the children.  Here, it is five-year-old Deirdre who sees the “lantern-men” and the others who live inside the hill, recognizing the threat to Stephen before her siblings do.   Is it worth keeping such a dangerous secret when they know nothing about Stephen in the first place?

While Gray's later books received greater acclaim, this has the power to terrify but also to charm. 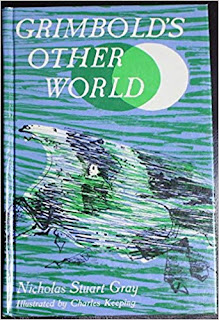 Favorite Quotes: Even after we’d been living with him for a fortnight, he looked surprised each time we trooped in to meals.  And we aren’t truly all that peculiar.  I admit we’re a bit apt to talk all together, to save time.  And we move rather fast occasionally.  Uncle just wasn’t used to us, though after a bit he did stop jumping when he met us around corners.
“I’ve had a phone call,” said Uncle.
“From the police?” asked Julia, before I could stop her.
“No,” said Uncle James.  “Should I have?”
“Oh, no,” I said. “They can’t possibly know anything.”
“You relieve me,” said Uncle. . . “Bruce,” he said, “I’ve always found you trustworthy, if erratic. . .”
I was glad to hear this, and said so.  Though I wasn’t sure about the last bit.

Andrew is two years younger than we are, and slightly weird.  He reads books. Non-fiction.  On purpose. He gets them from the Public Library, where he has managed to make the librarians so impressed that they give him almost any book he asks for.  Fearful things, about electronics, and biology, and geology, and mathematics, and such.  At first when he abandoned space-ships for this line, we thought he was going mad.  Naturally.

“Rules were made to break,” suggested Andrew.
Julia said that was a very immoral proverb, and he said he’d heard Uncle say it.  Julia said she betted he . . . Uncle . . . didn’t know that he . . . Andrew was listening.  Andrew said even if he didn’t, he’d said it.  I said that listeners never heard any good.  Andrew said I was confusing the issue.  As I’d confused myself, too, I returned to the main problem.

But all I saw was Stephen, walking lightly and by himself toward the blank and dirty broken plaster of the cellar wall.  A sort of grief came over me in a wave. . .  Stephen glanced round at my brother and sisters, and back again to me.  “Kind Julia . . .” he said, “and clever Andrew and Deirdre who sees to much . . . they’ll forget all that they’ve seen.  The Lady of the Hill wishes it so.  And you, Bruce, who have seen so little, will remember everything.  The Lady of the Hill wishes it so.”
“Forget!” cried Julia, “as if we could ever forget you!”
. . . “You will,” said he.  “It’s far better that way, Julia.  Anything to do with magic is best avoided where possible.  It’s very strong and very dangerous stuff.  And there aren’t any words to say think you as you ought to be thanked.  But still I thank you. 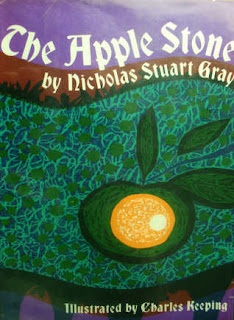 Off the Blog: Such fun to see my nephew playing Mush in Newsies this weekend!

Thanks for this. I haven't read anything by Nicholas Stuart Gray, yet another author that I missed out on as a youngster as I went on to adult fiction too soon.

I only recently discovered Gray's books, and have been working on gathering copies....this one sounds right up my alley!