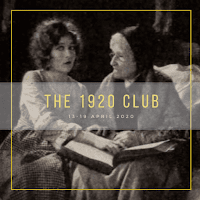 Plot: This is a short story collection set in Avonlea, Prince Edward Island, the Canadian village and province made famous by Anne of Green Gables.  Anne plays a leading role in just one story, The Little Brown Book of Miss Emily, and is mentioned in passing in two others, as most of the stories are about other Avonlea or nearby residents.  Gossip, weddings, tragic love affairs, orphans, quirky pets and feuds are featured, some with happy endings and some with dramatically sad results.  For those who cannot concentrate on full-length books during this current worrying time, Further Chronicles might be just the ticket!

My Impressions: Anne of Green Gables was published in 1908 and by 1920 Montgomery had published four sequels.  She would go on to publish 20 novels and a number of short story collections (others were published after her death). This is an uneven collection of stories and, apparently, Montgomery did not authorize their publication.  As a child, I read but was never quite as enthusiastic about Montgomery’s meandering tales of characters I had never heard of (I realize this is why I never cared for Sara Stanley, The Story Girl) but upon rereading, I realize there are several that are quite memorable.  Montgomery’s books are full of feuds and disagreements that seem silly to outsiders.  One such 20-year estrangement takes place in Her Father’s Daughter, where Isabella Spencer forbids her husband to resume his life as a sailor and when he does, she bans him from her home and her life, refusing to even discuss him with their daughter, Rachel.  Rachel meets him by chance just once and establishes instant rapport.  When she is to be married, she insists on inviting him, to her mother’s annoyance.  As stubborn as her mother, she wins out and the wedding results in reconciliation for all.

The Little Brown Book of Miss Emily features Anne but is written in the first person so it does not sound like her at all, although Marilla and Diana ring true.  An old lady, disliked by the girls because she was sharp and sarcastic, dies and leaves Anne a trunk containing her journal.  Emily’s journal reveals a long-ago romance with a famous painter from Montreal who loved her but his mother did not think country-bred Emily was good enough for him, so persuaded Emily to give him up.  Emily sends him a purposely vulgar letter, pretending she was just flirting so he would be disgusted and never correspond with her again.

When we had finished [reading the little brown book] the tears were running down both our faces.

“She was good and strong and brave,” I said. “I could never have been as unselfish as she.”

A poignant story but does it seem like the authentic Anne to you? I remember particularly disliking the final story in this collection, Tannis of the Flats, in which a lovely young woman who is part Cree and part French Canadian falls for Jerome Carey, newly arrived in town to run the telegraph.  Tannis is educated and well-mannered but is referred to throughout as a half-breed and no one, including Carey, takes his flirtation seriously.  When he meets Elinor, a golden-haired, blue-eyed beauty, he forgets Tannis, who is devastated.  However, when there is an accident and Carey faces death, he wants to say goodbye to Elinor and Tannis is the only person who can unselfishly bring her to the deathbed:

She knew when it happened by Elinor’s cry.

Tannis sprang up and rushed in.  She was too late for even a parting look.The girl took Carey’s hand in hers, and turned to the weeping Elinor with a cold dignity.

“There must be some arrangements made,” faltered Elinor.

“My father and brother will make all arrangements, as you call them,” said Tannis steadily.  “He had no near relatives in the world – none at all in Canada – he told me so.  You may send out a Protestant minister from town, if you like; but he will be buried here at the Flats and his grave will be mine - all mine!  Go!”

And Elinor, reluctant, sorrowful, yet swayed by a will and an emotion stronger than her own, went slowly out, leaving Tannis of the Flats alone with her dead.

Upon rereading, I can see why my eleven-year-old self was instinctively horrified by the racism and could not forget the passionate loss conveyed.  I felt sorry for Tannis and the author did too, recognizing that Tannis did not know the rules of light-hearted friendship. However, I think Montgomery was more approving of the way Elinor copes with tragedy: she grieved quietly, she never marries, and is “quiet and serious, with a shadowed look in her eyes which time could not quite succeed in blotting out.”   We know now that Montgomery's husband, Reverand Ewan Macdonald suffered from melancholia and that she herself struggled with depression in an era when it was not acceptable to reveal such suffering.


For those who prefer more Anne in their Montgomery, here are my Top Ten Most Romantic Anne Shirley and Gilbert Blythe Moments.
Source: Personal copy
Posted by CLM

Such an interesting choice for 1920! I think I only ever read the first book - I was more of a What Kate Did girl when it came to reading the American classics. I can see how unever this collection sounds, though!

I've only ever read the first Anne book - maybe this one will come up at some point when I finally delve on. But I had no idea the series was all so early!

This was the only LMM I ever read as a child, beccause my Grandmother owned it. Explains why I never bothered with the rest. But oh, do I love them now!

I've just realised that I haven't read all of the Anne books although I loved the ones I have read. More recently I enjoyed her 'Emily' trilogy. Thanks for the photos.