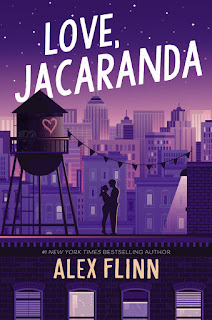 Plot: Jacaranda Abbott is a foster kid with a voice.  While working as a cashier at the Publix grocery store in Florida, she makes up and belts out a song for an elderly customer and it goes viral. When she is offered a scholarship to attend a performing arts boarding school by a mysterious benefactor, she knows what an incredible opportunity this is but is worried people will find out her mother is in prison.  School is hard work but fulfilling and Jacaranda, now calling herself Jackie, is determined to take advantage of every opportunity.   She is happy but once she starts dating a millionaire’s son who seems sensitive and caring she wonders what will happen if he finds out her secret.


Epigraph: "The world is full of happiness, and plenty to go around if you are only willing to take the kind that comes your way.” Jean Webster, Daddy Long Legs.  This appears at the beginning of the book.

My Impressions: This is a charming tribute to Daddy Long Legs, a book I have reread often and always enjoyed, although admittedly aspects of it seem stalkerish in this day and age.   Flinn tries to get around that aspect by having Jackie’s benefactor not read the letters himself although his intermediary seems to pass along non-sensitive information (hopefully not the rhapsodies about how cute he is). 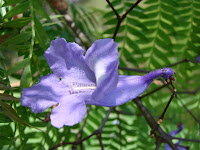 My recollection of Flinn’s work made me think this would be a gritty read but instead, it is a fun and lighthearted portrayal of an exuberant and outgoing heroine.   Jackie may not possess quite the whimsical and poignant characteristics of Jerusha Abbott that have captivated readers for more than 100 years and Flinn’s hero, Jarvis Pendleton, is too good to be true, but I enjoyed the depiction of the performing arts school Jackie attends, the students, teachers, auditions, jealousies, and stresses.  It is also a story of first love, of taking risks and fighting for what you want.  Although I read it as an homage to Jean Webster it will certainly be enjoyed by those who have never read Daddy Long Legs.

There is certainly angst: Jackie admits her foster care situation is not terrible, but it is clear that since her grandmother died and her mother went to prison that she has been on her own, and the only pleasure in her life was taking chorus in school, which might have been doomed due to budget cuts.   She feels guilty about being happy at her new school while her mother is incarcerated and suspects some of her new friends might shun her if they knew about her mother.  I am skeptical that a 16-year-old with no formal training would be competitive with the students at Midwestern Art Academy who have benefitted from lessons and tutors and years of practice but I suppose reality TV makes that more plausible in this day and age. 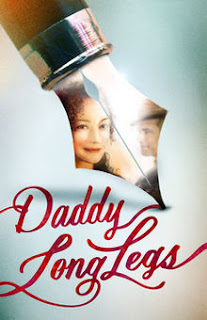 DLL the Musical: Several years ago there was an Off-Broadway musical of Daddy Long Legs with music and lyrics by Paul Gordon which I saw with my friend Ellen; a two-person show that was very appealing.

Source: I got the ARC of this book from HarperCollins at ALA Midwinter in Philadelphia, having recognized the author’s name from Nothing to Lose, which I read and liked in 2013. Highly recommend, even if - as I say above - you never read Daddy Long Legs.
Posted by CLM