You and Me and Us by Alison Hammer 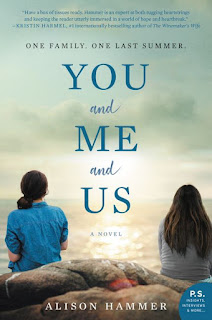 Plot: Alexis Gold knows how to put the “work” in working mom. It’s the “mom” part that she’s been struggling with lately. Since opening her own advertising agency three years ago, Alexis has all but given up on finding a good work/life balance. Instead, she’s handed over the household reins to her supportive, loving partner, Tommy. While he’s quick to say they divide and conquer, Alexis knows that Tommy does most of the heavy lifting—especially when it comes to their teenage daughter, CeCe.

Their world changes when Tommy receives a terminal cancer diagnosis, and Alexis belatedly realizes everything she’s worked relentlessly for doesn’t matter without him. So Alexis does what Tommy has done for her almost every day since they were twelve-year-old kids in Destin, Florida—she puts him first. And when the only thing Tommy wants is to spend one last summer together at “their” beach, she puts her career on hold to make it happen . . . even if it means putting her family within striking distance of Tommy’s ex, an actress CeCe soon idolizes.

But Alexis and Tommy aren’t the only ones whose lives have been turned inside out. In addition to dealing with the normal ups and downs that come with being a teenager, CeCe is also forced to confront her feelings about Tommy’s illness—and what will happen when the one person who’s always been there for her is gone. When the magic of first love brings a bright spot to her summer, CeCe is determined not to let her mother ruin that for her, too.  As CeCe’s behavior becomes more rebellious, Alexis realizes the only thing harder for her than losing Tommy will be convincing CeCe to let her back into her daughter's life.

My Impressions: Although this is a book about grief and loss, it is also a book about hope and about the vicissitudes of being a family. Tommy, the dying father, is the most appealing character in this story and at times I felt there must have been an earlier book in which he and Alexis reconnected as adults and fell in love.   However, this is a debut novel that captures the pain of losing a beloved family member.   Having lost my own father three years ago, I was reflecting on Joe Biden’s advice to bereaved families, not merely that the pain will ebb but that there will be a moment when one’s first reaction is a smile of love and affection rather than tears, and that is the moment when one has begun to recover.   I am certainly not there myself and I don’t think Alexis and CeCe will reach it soon.

The book was well written and full of memorable characters; however, Alexis, the heroine, is very unlikeable.  We are meant to excuse her because she started her own business three years ago and has demanding clients.   Yet, CeCe makes it clear Alexis failed to show up to her events and activities long before she ran her own business.  In fact, being the boss doesn’t just mean more pressure and responsibility, it often means some flexibility.  Alexis simply wasn’t there for her husband (even when he is trying to tell her of his diagnosis) or daughter, and just because she agrees to spend the summer in Destin doesn’t make up for years of neglect.  Even when she knows she will be CeCe’s only surviving parents, she has a hard time being kind yet is resentful of her daughter’s hostility.  She is also very rude to CeCe’s boyfriend, who is the son of her best friend.  Her apology is grudging and it is ironic that she wants forgiveness for her neglect, yet is blaming a teenager for something his father did.  She also has been stalking this boy on Instagram even before he was involved with CeCe, which is kind of odd for something so busy.  I did like Alexis’ friends Jill and Becky, either of whom could use a book of her own in the future.

Source: I received a copy of this book from the publisher and TLC Book Tours for review purposes. You can visit other stops on the tour and read the reviews by clicking below:

Email ThisBlogThis!Share to TwitterShare to FacebookShare to Pinterest
Labels: Alison Hammer, book review, fiction, grief, summer, TLC Book Tours, William Morrow, You and Me and Us

Sounds like a good one, greetings from the finally thawing north...D

YES!!!! I really felt the friends could go on to have their own book, as well. You absolutely nailed all of my thoughts on Alexis, too. Thank you for being on this tour! Sara @ TLC Book Tours