The 1956 Club is a meme created by Simon at Stuck in a Book and Karen at Kaggsy's Bookish Ramblings to showcase books published in a specific year. 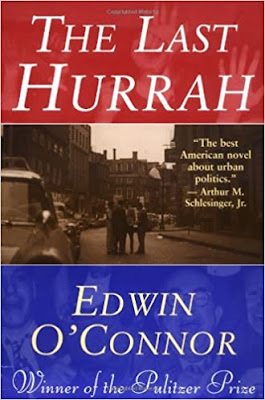 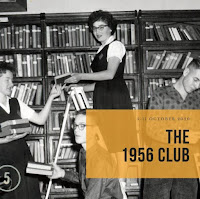 Description: The Last Hurrah depicts the final campaign of an old-time mayor, Frank Skeffington, an Irish politician who has managed big city politics with equal measures of charm and graft, annoying the Protestants who manage the banks and law firms so much they are supporting his opponent, any opponent.  Disappointed in his own son, Skeffington invites Adam, the nephew he barely knows, to join him on the campaign trail.  Adam, a cartoonist unfamiliar with politics, is wary of being drawn into Skeffington’s corrupt world but curious enough to follow the old charmer to wakes and rallies and sessions with hangers-on, and surprises himself by coming to admire and care for his uncle. 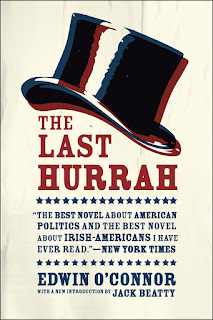 My Impression: The Last Hurrah is considered to be an outstanding novel about Irish-Americans and politics, and it did not disappoint.  What I didn’t expect was the humor the author uses to reveal Skeffington’s world, the quirky characters, and how he micromanages those around him.   O’Connor captures the demands of a campaign, the endless need to appease competing interests, the sycophants who want to be close to the candidate, the weariness at the end of the day and, here, the advent of television as a new medium:

Following the custom of his political lifetime, he did not once mention his opponent’s name, the principle being that in the demolishing of one’s victim, it was hardly necessary to advertise him.

The sense of place is so strong that I was amazed to read afterwards that the author never mentions Boston although it is obviously set here.  I recognize the streets O’Connor describes, including Skeffington’s neighborhood, and I can see the Cardinal in his residence, having been inside once myself.  And the hangers-on who surround the Mayor are male in this book but otherwise little different from those I see around the current Mayor:

What they did for [Skeffington], what they meant to him, was a mystery to Adam: their function appeared to be that of simply being around.  All of them, in one way or another, paid Skeffington the doubtful flattery of imitation: some had chosen to duplicate his formal, old-fashioned style of dress; some the tones and accents of his speech; others his air of courtly benignity.  These attempts at duplication were seldom entirely successful, but the total effect was often astonishing: the sight of Skeffington entering a hall surrounded by his ring of Imperfect mimes was not one easily forgotten.  They seemed to amuse him, although Adam wondered if often they must not have exasperated him by their very persistence, their unflagging omni-presence, their relentless determination to prove they were “with him” in every sense of the phrase.  Still, he kept them around . . . 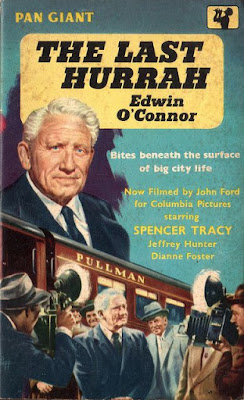 Skeffington was inspired by legendary Boston Mayor James Michael Curley, which everyone knew including Curley himself.  The book was a bestseller and made into a well-reviewed film starring Spencer Tracy (my edition asserts that Curley tried to prevent the movie from being made).  I was once invited to sit at Mayor Curley’s desk, which was quite a thrill.

I had heard of both the book and the movie, but haven't read the book or seen the movie. It sounds like you enjoyed it; maybe I will try the book some day. And maybe the movie too, I am a Spencer Tracy fan.

I read this a couple of years ago & quite liked it. I hadn't realized there was a movie version--I'll have to hunt it up!

Oh this sounds much more fun than I anticipated from a Pulitzer winner :D I also marvel at how many Pulitzer-winning authors I've never heard of.