I decided to share an old favorite for my last entry in Simon and Karen's #1956 Club. 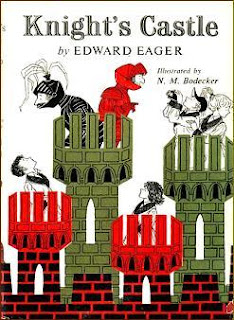 Description: This follows Magic by the Lake and is about the offspring of the children in Eager’s best-known book, Half Magic.   Roger and Ann, visiting their cousins in Baltimore while their father is in the hospital, are taken to see the Elizabeth Taylor movie of Ivanhoe and are enthralled.   They start reenacting Ivanhoe with the castle Aunt Katharine gives Roger and new soldiers from their Uncle Mark, and then at night the soldiers come to life and they find themselves back in the days of Ivanhoe and Bad King John . . .  with complications resulting from lead soldiers, oversized dolls, and difficult cousins. 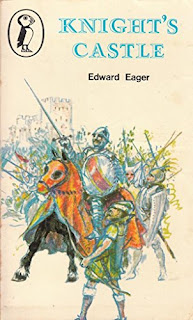 My Impression: This is a delightful fantasy and, in many ways, more fun than the actual Ivanhoe.  It is Roger’s soldiers that come to life and he is the first to experience the magic:

[Brian] de Bois-Guilbert in particular was in a vile mood.  He stalked up to Roger and stood glaring down at him.

Roger began feeling less reckless. It is one thing to play with a toy castle and wish you were back in the golden days of chivalry, and it is another thing to be really there and have one of the greatest villains in all legend standing glaring down at you and breathing the hot breath of wrath in your direction.

Roger gets carried away, as one does when confronted by characters in books, and reveals that Ivanhoe is hidden in the castle and Robin Hood and Richard the Lionheart waiting outside. About to be thrown off a parapet, Roger remembers something:

“I’m not afraid of you!” he cried. “You’re not even real.  You wouldn’t even be Bois-Guilbert if I hadn’t said you were.  You’re nothing but a lead soldier!”

. . . Bois-Guilbert fell back shuddering before him and the fighting men dropped their swords and all the people fell on their knees, and a murmur of awe ran from lip to lip among the crowd.

“The words of power!” cried some, and “The Elfish Charm!” cried others, and “I said ‘twas no mortal boy!” said Lionel.

Roger wakes up in bed and tells his mother he had a dream. “'Anyway, it’s over,' he says sleepily.  But it wasn’t over." 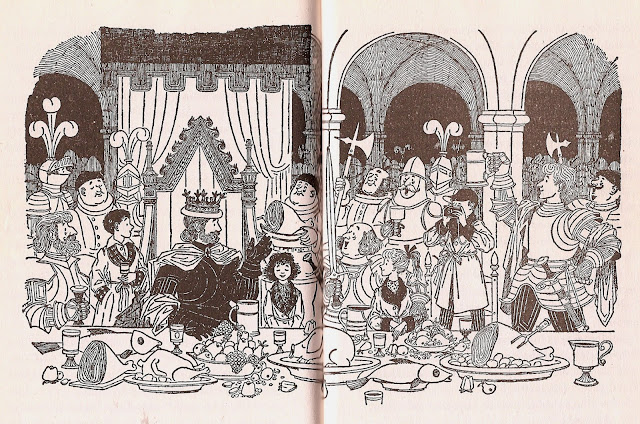 Edward Eager (1911-1964) was a dramatist (he wrote the Hasty Pudding show while an undergraduate at Harvard) who started writing books to entertain his son – alas, only seven books.  He was very much influenced by L. Frank Baum’s Oz books, which he read as a child, and by E. Nesbit, whose books he discovered when he became a parent, living in New Canaan, CT.  He admired the way she brought magic into the lives of ordinary children.  Eager refers to The Magic City in this book (which has a similar plot), and you can imagine him reading aloud to his son Fritz:

And best of all, their father always read to them for an hour after dinner, even though they’d been able to read perfectly well to themselves for years now.  This practice sometimes led to hot argument, because Roger was getting to be rather a yeomanly type and wanted to hear books like The White Company and The Scottish Chiefs, while Ann was becoming all too womanly, and leaned towards Little Women and the Betsy-Tacy books. And their father would complicate matters by always wanting to read books like Five Children and It, which he said was great literature.  And Ann agreed that, next to the Betsy-Tacy books, it was.

I am curious but puzzled as to how Eager came across Betsy-Tacy when he had just one son. It’s possible he just found them and read them aloud but  I wonder if he met Maud Hart Lovelace and her husband Delos at some literary gathering in New York?  Doesn’t the mention above seem like a tribute to a friend?  This is not his only mention of Betsy-Tacy and perhaps he read the one where Betsy and her friends are assigned to read Ivanhoe over the summer. I wish I had asked Maud’s daughter Merian before she died.  Eager passed away in his 50s, while working on a book that would have featured the children from Half Magic and Knight’s Castle, but it was never finished.  His son, who also went to Harvard, died in his 20s, just a few years after his father. Very sad!  But I can't conclude without mentioning how much I love Danish-born N. M. Bodecker's illustrations in all of Eager's books. 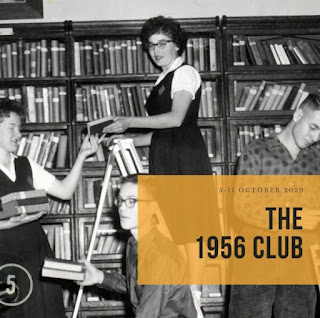 I've never even heard of this author, I presume his books didn't make it to the UK but they sound great and I love the illustrations too.

I remember kids reading this when I was young. Not my thing, but it does look sweet.

Sounds so fun - love the idea of Ivanhoe and Rebecca!

We had Half Magic when I was a child and I loved it. As an adult (maybe trying to recapture my pleasant childhood?), I've read Seven Day Magic, Magic or Not?, and The Well-Wishers, but I haven't heard of this one until now. It's now on my list of book to find. Thanks.

This was a favorite of mine as a child, long before I came to Betsy-Tacy (which wasn't till I was grown up). Neat to see the connection!

I have a fair number of these books in the library, and I've never weeded them because I, too, love the illustrations. They check out occasionally, especially Half Magic, which is really rather clever. Big Betsy-Tacy fan, and have those books, too.