The House on the Strand by Daphne du Maurier #DDMreadingweek 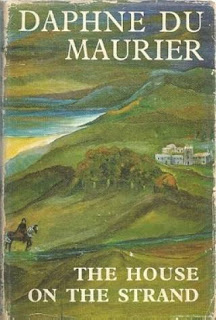 Description: Publishing executive Dick Young is between jobs when his old friend Magnus Lane lends him a vacation home in Cornwall, somewhat in exchange for Dick’s assistance with a mysterious project. In his free time, Magnus, a biophysicist, has been experimenting with a mind-altering drug and persuades Dick to try it out before his wife and stepsons join him for their holiday. Dick remembers the house fondly from visits while Magnus’ parents were alive but is skeptical of Magnus’ request and the odd laboratory in the basement of the house; however, he drinks some of the liquid and finds himself back in the 14th century.
Once there, he is connected to Roger, a somewhat duplicitous steward to one of the landowners, and Dick soon realizes he is invisible and that trying to touch someone human will jolt him back to the present – sometimes with acute physical symptoms. Dick learns Magnus also went back in time and involuntarily shadowed Roger; both men are fascinated by what they saw and want to learn whether the people they saw existed or are some peculiar shared fantasy. For Dick, the time-traveling becomes addictive: he cannot think about anything else and his behavior starts generating suspicion from his wife whose early arrival disrupts Dick’s plans to immerse himself in this fascinating world. However, the lure of the past becomes so strong he starts to ignore common sense – with disastrous results. 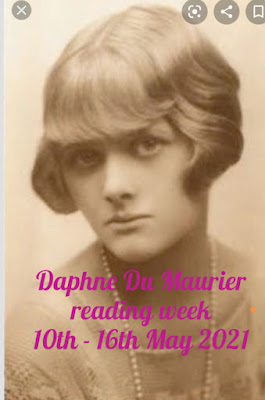 My Impression: This book was inspired by Kilmarth, the one-time dower house of du Maurier’s beloved Menabilly, where DDM moved in 1969 after their lease ran out. According to Enchanted Cornwall, DDM visited the empty house frequently while she and her husband were planning their move and found a basement room full of dusty bottles which had been used by the previous tenant, a scientist, giving her the basic premise for the story. Her husband died shortly after signing the Kilmarth lease, which was a big shock to her, and she wound up moving in alone. A local told her the house dated back to the 14th century and had been owned in 1327 by a Roger Kylmerth, and she decided her book would be a time travel, set in the past and present, featuring Roger’s home. Although some of the descriptions of Dick while under the influence of Magnus’ drug resemble descriptions of LSD use, DDM states in Enchanted Cornwall that she did not do any such experimenting for the book. Her imagination was more than enough to conjure up the 14th century inhabitants of this corner of Cornwall who are vicious to each other but fascinating to Dick and Magnus.What makes this book work so well is the way DDM shows how the visits to the past become Dick’s obsession, to the point where he is annoyed that his wife and stepsons are joining him in Cornwall because it will interfere with his trips, and he is outright rude to them and others as he loses his ability to adjust back to the present. Initially, it is hard to keep track of the 14th century characters, despite the helpful genealogical chart in the front, but with the advent of Isolda, the lovely and unhappily married woman who captures Dick’s imagination and sympathy, people start to fall into place, although their motivation is not always clear. Several times, Dick returns to the present so abruptly that he describes things he has seen in the past as if they are part of his modern-day life, and this causes people to become wary of him. Dick and his wife Vita seem ill-suited to begin with and what may have been a strong sexual bond initially is threatened by his evasiveness, which becomes indifference to her; she blames most of this on Magnus, whose influence over Dick she resents (I assume her name 'Vita' is meant to contrast to Dick’s preference for spending time with people who are, essentially, dead?). The story picks up in pace after DDM has set the scene in the past and present, generating that sense of dread one experiences when a car is about to crash but cannot be stopped.  Similarly, Dick can see the terrible things that are happening in 14th century Cornwall but he cannot affect the outcome.I had read The House on the Strand once as a teen but did not have a strong recollection of anything but the basic plot (and the allusions to Magnus being gay went right over my head) but during this reread I recalled my mother being absorbed by it when first published, long before the genre of time travel was popular, and commenting as she progressed. I particularly remember her describing how when Dick forgets Magnus’ warning and tries to touch a living 14th century being he is catapulted back to the present and is violently nauseated. I think she also revealed one of the big twists at the end but who can blame her for needing someone with whom to discuss it?! Given our mutual appreciation of du Maurier, I am surprised we didn’t go to Cornwall on our last trip to the UK but I will look forward to that another time – this summer’s trip was canceled but maybe in July 2022.
What is a strand, exactly?  The land bordering a body of water: shore or beach.
Source: Library, because the USPS lost my copy when I mailed it to my sister last May! Not that I am bitter about that book or the eleven other books in the box that went missing. . . 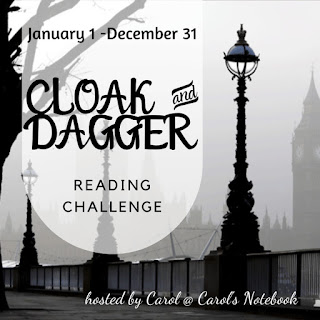 This is my twelfth book for the Cloak and Dagger Challenge.
Previous du Maurier Reviews: Hungry Hill; Kiss Me Again, Stranger; Myself When Young
Posted by CLM

I read this about ten, possibly fifteen years ago... in fact it may be closer to twenty as Goodreads has no mention of it on my shelves. I remember being incredibly impressed with it but then Du Maurier's writing is sublime. I had no idea it was inspired by Kilmarth, I seriously need to read my copy of Vanishing Cornwall and get hold of a biography too. As a teen I fell in love with Frenchman's Creek, read it several times into my twenties, but not since then. I wonder if it would still hold up but she certainly got the atmosphere of the Helford River area spot on so I wouldn't lose by a reread.

I started reading Daphne and Her Sisters last night but so far it is a rehash of Myself When Young so I don't recommend. I put it down and started The Parasites instead.

I haven't reread Frenchman's Creek but I found Jamaica Inn such a great blend of terrifying and romantic. I am always amazed by people who have only read Rebecca!

I re-read this one last year and enjoyed it although Rebecca is still my favourite, I also really liked The King's General. I watched a TV programme about du Maurier which mentioned that many older readers plump for The House on the Strands as being their favourite which is why I decided to read it again. I wonder what they meant by 'older' maybe I'm not old enough yet!
How maddening about all those books being lost in the post.

This sounds very good, I had no idea that du Maurier has written anything like this.

I still have this to read, it sounds great and I'm looking forward to it. I've enjoyed everything by du Maurier I've read but The Scapegoat may be my favorite. This year I read Myself When Young for the reading week (review on Goodreads: https://www.goodreads.com/review/show/3996699280)

Cornwall is definitely a place I'd love to visit some day. Somehow, some DDM book always slips through my grasp. I've read Rebecca, Jamaica Inn, Scapegoat and Frenchman's Creek... and then I see there's this book too. I'm going to have to look up her backlist to see what else I'm missing. ~Lex

I loved this one too and was surprised how good it was, since it doesn't get a lot of mentions among her best work. I don't remember the allusions to Magnus being gay but it's been a few years since I read it. I'm hoping to get to The Flight of the Falcon this week but I probably won't finish it to post this week.

I've only read two of du Maurier's books: Rebecca and My Cousin Rachel. But I like her writing. And this sounds like an intriguing novel. :)

I used to love Daphne du Maurier, my mom had all her books. I went back and re-read Rebecca recently and was underwhelmed but maybe I should re-read some of her others.

Wow, what an amazing structure!

And what a plain cover for the U.S. version. Bah.