The Academy Saga by CJ Daly - an intriguing series launch 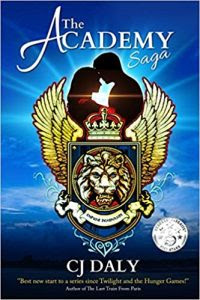 Description: At barely 17, Kate Connolly is stuck in a trailer, raising her precocious younger brothers, with a father who was abusive even before her mother died several years ago. Her mother’s dying wish was for Kate and the boys to avoid school or even being seen much in public but that was not practical. All three now attend public school and Kate has a part-time job, but dutifully wears glasses she doesn’t need, as her mother had commanded. When two mysterious guys show up at the diner where she works and start giving her a hard time, Kate is taken aback. As if her life isn’t hard enough. Something about them other than their unbelievable rudeness bothers her, but she brushes it off. She’s never going to see them again anyway, right?

Then they appear in an alley one night to either rescue or kidnap her (she’s still not sure which) before disappearing like figments of her imagination. Kate decides to put the bizarre encounters out of her mind. She has bigger problems to worry about: like the elite military academy that’s been pursuing her gifted little brother. When one of their cadets shows up at the high school, he creates instant pandemonium. And just happens to be one of those mysterious yet gorgeous guys.
Coincidence? Kate’s mother said there’s no such thing and to always trust her instinct. But that might be difficult, because every time she’s around Cadet Peter Davenport, she can’t think of anything but how much she is attracted to him – and how little she should trust him. Can Kate manage her difficult father and emotions long enough to protect her family and stop Cadet Davenport’s mission? She’s about to find out.

My Impression: CJ Daly is a great storyteller who has crafted a compelling new series about an appealing trio of siblings. My copy of this first book arrived on Saturday and I decided to read one chapter about midnight. I wound up reading the entire book and finished about 6 am! The characters are well-developed – Kate and especially her younger brothers are very appealing and have distinctive personalities. There is a great deal of suspense about what the elite academy is up to and why it wants the Connolly boy so badly it would bribe his father to get him but there is also a lot of teenage angst and yearning that will appeal to fans of The Hunger Games, which is clearly the series’ primary audience. Pete is not just attractive but kind, yet Kate knows they are on opposite sides so she can’t trust him or believe he really wants to help her. This was a fun read and I look forward to the sequels.

It’s fair to say the book would benefit from editing: it is repetitious in the middle and could be reduced by at least a hundred pages without impacting the story, and there are a lot of grammatical errors. The father's dialect is grating, although perhaps this is meant to show his lack of education.  The author’s enthusiasm shines through on every page, however, and I wanted to know what would happen next and how she would get there.

There is a mystery about Kate’s mother and more will doubtless be revealed about her in future books, but the biggest puzzle is why she married a bible-crazy man who does not seem to do any work and is abusive to his children? Presumably, she needed refuge and he was the only port in a storm?

Source: I was provided a copy of this book by the author and TLC Book Tours for review purposes.  Everyone seems to be enjoying this book! Please visit other stops on the tour to read other reviews:

May 4th: Read Till Dawn

May 10th: Stranded in Chaos

May 17th: Teachers Who Read

Love your, thoughtful, in-depth review and love having you along for The Academy Saga journey! Can't wait for you to see what happens next!!

This sounds fun! I was not a fan of Twilight but I will admit to enjoying Hunger Games.

The Academy Saga series is a fantastic way to get out of the dreary and into the Academy heartbeat. There are a few characters that I just can't stand and that makes it an even better read lol

Have you read book three yet? I am working my way through and loving it

This entire series is so well-written by CJ Daly! I am about finished with Book 3 in the series and am already craving Book 4!

I love these series,the characters, the story and the drama. I love how unpredictable the story is, you think you have it all figured out and then bam! something unexpected happens. I can't wait for book 4 :D

This series is awesome! Hope there will be another book...

Great review, thank you for sharing it with us! I love these books! CJ is an awesome writer and she knows how to keep us from putting the book down. I can't wait to keep reading more and more books from The Academy Saga ❤️️