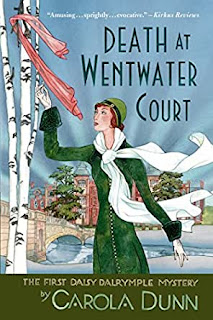 Description: Like many young Englishwomen, the Honorable Daisy Dalrymple lost the man she loved in World War I.  She also lost her brother so the ancestral home now belongs to a cousin.  Not wanting to be the poor relation on sufferance, Daisy is trying to make a living as a writer. After successfully pitching a series of articles on stately homes to a magazine, she heads to her first assignment at Wentwater Court where she finds a household on edge – followed by murder!  When Scotland Yard is called in, Daisy’s photographic skill and observations of the family are invaluable to the handsome chief inspector trying to solve the mystery without offending the aristocracy.

My Impression: The challenge that many authors of historical fiction fail is to craft an intelligent and self-reliant heroine who is not too anachronistic for the discerning reader (this is why I am worried about Bridgerton).  Perhaps because Carola Dunn is British, she is careful to create Daisy Dalrymple as an authentic member of the British upper class who has embraced the respectable career of writing yet still behaves in a way that does not offend either the well-born, their servants, or critical me.  Daisy is outgoing and sincere, quick to make friends, and loyal to those she senses are in trouble. If she sometimes sounds like a British schoolgirl, that may be an inevitable aspect of associating with Bright Young Things. While the series does not break any new ground, it is always pleasant (so to speak) to be at a house party interrupted by murder!  There are just the right amount of characters to get a sense of personality without there being too many to keep straight.  Although I am not much of a cozy fan, I think I will read more of this series, which begins in 1923.

This was billed as a Christmas mystery but it actually takes place in early January; Dunn says she was planning to call it Death in January so she wouldn’t have to agonize over a subsequent 11 titles in the series, but her editor rejected that idea (the unconvincing cover below does show seasonal ice skating which does figure in the plot). There are apparently 23 books in the series at this point.  I do like the character of Detective Chief Inspector Fletcher:

He rose to his feet.  Gentleman or not, he was well-dressed in a charcoal suit, with the tie of the Royal Flying Corps.  Of middle height, broad-shouldered, he impressed Daisy as vigorous and resolute, an impression reinforced by rather intimidating dark, heavy eyebrows over piercing gray eyes.

Daisy was not about to let herself be intimidated.  She advanced across the blue Wilton carpet, held out her hand, and announced, “I’m Daisy Dalrymple.”

“How do you do.”  His handshake was cool and firm, his voice educated – though not at Eton or Harrow. . . Altogether he was rather gorgeous, she decided.

Grey eyes are always a hero alert, aren’t they?  But can you really tell what color someone’s eyes are unless you are extremely close to them?

Wilton carpets originated in the Wiltshire town of Wilton, which was known for its wool trade. Huguenot weavers brought their craft to England in the 18th century (allegedly smuggled out of France in barrels by the Ninth Earl of Pembroke) and although many changes in ownership have taken place in the intervening years, Wilton carpets are still manufactured in Wilton

Off to what substitutes for Midnight Mass around here - 6 pm!  Merry Christmas to those who celebrate!

As an American I have read and enjoyed this entire series and am currently working my way through it again via Audiobooks. I am delighted to learn that at least the first entry in the series stands the test of a discerning UK based reader. While I have read enough actual "golden age" detection and other novels by English and Scots authors between the wars that I can pick up some of the goofs by modern authors attempting to fit in, as an American sometimes things slip past.

I also highly recommend Carola Dunn's other series, the much too short series set in Cornwall with a heroine an older widowed female and set in about the 1960s or 70s. A delight.

Well, I like to think I am discerning but I am as American as you; just an Anglophile (probably also like you!). I think you are right, however, that because we have read so much we can usually recognize the gaffes, although I am sure I miss all the geographic errors.

I've read pretty much all of these apart from probably the last couple. They're a light read, but well written and Daisy is very likeable. I like the way her relationship with DCI Fletcher progresses and there's lots of gentle humour. I'm not much of a cozy fan but I do like this series which takes 4 or 5 books to get into its stride and then becomes very enjoyable.

Cath, I got Dunn's first Cornish mystery on CD too. Have you read that series?

I have read the first one of this series and I must have liked it and the premise, since I bought more books. I have the second one to read. The others I have are: #5, Damsel in Distress; #11, Mistletoe and Murder; and #17, Black Ship. I may read the rest of what I have without hunting for more. I haven't decided.

This series sounds so familiar! I went through quite a cozy/British mystery phase back in the 90s, so might well have picked it up. I'll have to take a look at it again.

Karen, it is more lighthearted than Maisie Dobbs (at least, based on one book) and I liked it enough to read 1-2 more. However, you might prefer a newer series set in Canada by Iona Whishaw.

I've only read one book by Carola Dunn (way back in 2011) and I really liked it, I intended to read more but haven't got around to it, so thanks for reminding me.

The Cornish mystery by Dunn was very disappointing. The characters were so tedious and unprofessional I nearly started rooting for the bad guys.