The Art of Alice and Martin Provensen 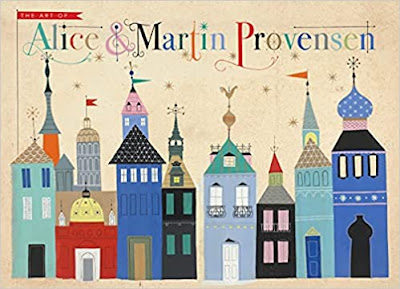 The Art of Alice and Martin Provensen is a comprehensive and stunning collection of the work of this extremely talented husband-and-wife illustration team. Together, they illustrated or illustrated and wrote more than 40 beloved and well-reviewed children's books from 1947 to 2005. They began with The Fireside Book of Folk Songs which I believe my mother has to this day, then illustrated Golden Books by classic authors such as Margaret Wise Brown. I became interested in them when I was researching possible Capstone topics last summer for my master’s degree. Although I decided there wasn’t enough archival material at the University of Southern Mississippi for my research purposes, I read that this book was being prepared by the Provensens’ daughter and Gloria Fowler at Chronicle Books, and put it on reserve at the library. At some point, I will want my own copy. 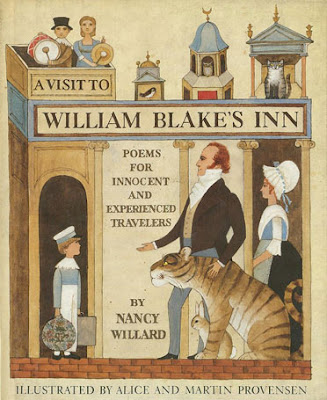 Their work was sufficiently varied to appeal to the smallest of children and sophisticated adults, often at the same time.  Two of their books won the highest honors for children’s book illustrators; their illustrations for A Visit to William Blake’s Inn, written by Nancy Willard, earned a Caldecott Honor book while she won the Newbery Medal, and together they wrote and illustrated The Glorious Flight: Across the Channel with Louis Bleriot, which was their 53rd book and won the Caldecott Medal in 1984. It is about the French aviator who made the first solo flight across the English Channel and was inspired by the Provensens’ love of aviation. 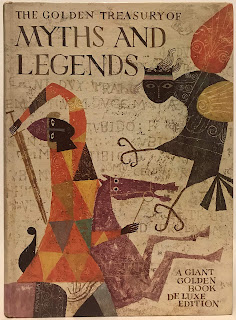 They illustrated many literature classics, A Child’s Garden of Verses, Shakespeare for Children, The Iliad and The Odyssey, and books on myths and legends. I didn’t realize until I was looking at these illustrations that they illustrated The Golden Treasury of Myths and Legends which I received for Christmas one year (I wonder where it went; I know for years it was in the bookcase outside the bedroom that was mine until my sister Andrea was born).

My favorite illustrations all seem to be historical in theme. I really like the classical illustrations of Greek and Trojan soldiers and the 16th-century Shakespearean actors but especially love their portrayal of The Charge of the Light Brigade, which is a little reminiscent of Victor Ambrus’ work, and Tales from the Ballet, which features ethereal dancers, a Nutcracker Prince, and a vibrant Firebird (not at the same time). 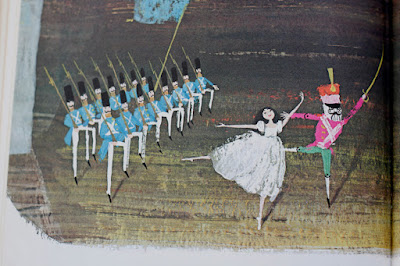 Readers may be more familiar with the work based on their cherished Maple Hill Farm (see my review). When Martin died, sadly, two weeks before their daughter’s wedding, Alice was not sure she could work without him after so many years of close collaboration, and I can only imagine how hard it was to go on living at the farm where they shared a home and a studio for so long. However, with the encouragement of her daughter and her editor, she began a nonfiction book about the American presidents, The Buck Stops Here, and completed eight more books subsequently. She did not lose the whimsy, which is part of what makes their books special but I don’t see the European charm that I find especially appealing.In addition to hundreds of color pictures of their books, sketches not previously seen, and even a Valentine that Martin created for Alice, the book includes a long interview with their daughter Karen which brings this talented couple to life. There are also interviews with children’s book expert, Leonard Marcus, and publishing guru, Bob Gottlieb, both of whom knew them well. Spending a few hours perusing this book was a delightful experience, although there were several urgent things I should have been doing instead.

If we could have a similar retrospective on the art of Joe and Beth Krush, I would be so happy. THis looks fascinating!

I hadn't heard of this couple before, I love the illustrations. Thanks.

Ooh, this looks like a wonderful book! I only know their art for Golden Books.

I do like the idea of a Joe and Beth Krush book, the only problem is that most (all?) of their art is black and white, so not as sumptuous as this book. On the other hand, there was a wonderful retrospective of HerBlock's cartoons a few years ago and it was very satisfying.

Lory, I know the cover of the Fireside Book so well but don't think I ever looked inside. Katrina, I suspect they were not well known outside the US but they loved to travel and were very influenced by what they saw. Apparently, their daughter has all their sketchbooks from these trips.

Deniz, I suppose I must have seen or had their Golden Books but I just don't remember. I don't much like farm books now but I would certainly have enjoyed their farm stories as a child.

This looks like a fantastic book, I would love to read it someday.