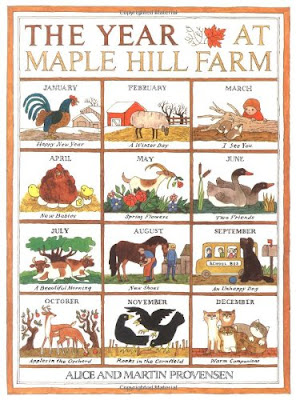 Description: This book chronicles a year on a farm, starting in January during the cold, grey days of winter, through spring and rebirth, the sense of change in the fall air, to the end of the year in December. The authors describe the seasonal changes on the farm and how the various farm animals are affected – cows, chickens, sheep, horses, dogs, nearby geese, rooks, squirrels, insects, even a water rat and a sly fox.

My Impression: This is a lovely and almost hypnotic glimpse of a year on a farm, which reminds me of Little House in the Big Woods in its portrayal of all that is magical about a rural setting (the locusts and lack of wheat come later). The authors, famous illustrators, know what children wonder about – does it hurt the horse to get horseshoes nailed on? how do animals get their medicine? In March it is windy as it has certainly been in Boston (part of my fence blew down on Sunday while I waited for the repair guy to come bolster it), but there are signs of spring: 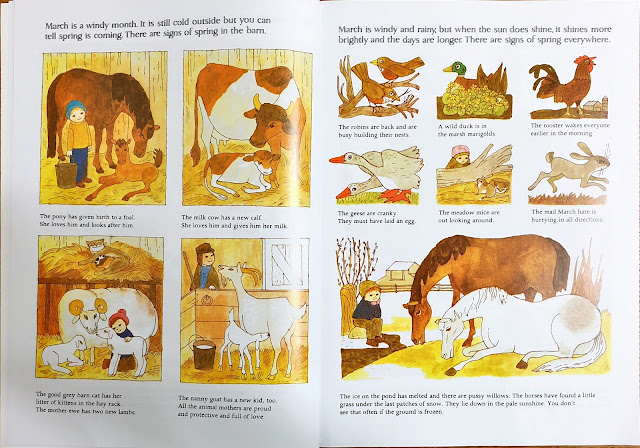 This is a very popular book that even has lesson plans available online for teachers to use when doing units on farms or the seasons. I am not usually a big picture book fan, other than of favorites from my childhood, but what better way to conclude the depressing month of March?  As the Provensens say, "There are signs of spring everywhere."

About the Authors: According to The Third Book of Junior Authors, the Provensens were both born in Chicago and interested in art, books, and illustration from an early age. They met in California when each was working in film. Eventually, they bought a farm in upstate New York, where their daughter Karen grew up. Together, they illustrated more than 40 children's books, including 19 which they also wrote and edited, including The Year at Maple Farm. Their collaboration involved working very closely on illustrations, passing the drawings back and forth, until both were satisfied. The farm was their inspiration for many illustrations, including this book.

Source: Library. If you are curious or have small children, the book is read aloud on YouTube.  I am so glad it is still in print!
Images copyright to Simon & Schuster
Posted by CLM

What a cute idea for a picture book! :)

Oh my goodness, what a charming book! At first I thought only the book cover was like that, then I saw it was a picture book and almanac rolled into one. I want this one!
~ Lex

I like picture books. I love that I can find so many of them at my library, especially when I am allowed to go in and browse. This is one I will look for.

They were a famous illustrating team recommended to my attention by a new friend. I also checked out of the library A Visit to William Blake's Inn which Nancy Willard wrote but they illustrated - it is gorgeous but I am embarrassed to say I haven't read enough Blake to really appreciate it. It won a 1982 Newbery Medal and was a 1982 Caldecott Honor Book, the ultimate recognition, but I am afraid children wouldn't get it at all.