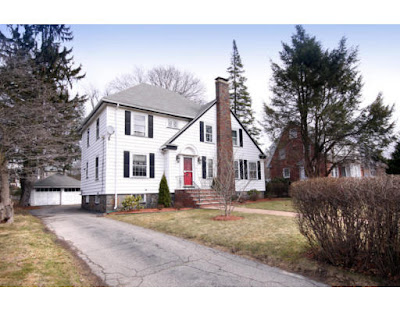 When I drove over for the first time as a homeowner, I will admit it was a bit intimidating. The house was dark; I don't know where the light switches are; and I wondered if a killer lurked within. I hoped the neighbors wouldn't call the police on me but figured burglars probably remove items, rather than bring them at 10 pm, and it is a very safe neighborhood. I left the headlights on so I would have light as I fumbled with the key. There were no killers inside (have I been reading too many thrillers?), only one intimidating centipede in the kitchen sink which I drowned. Don't tell my favorite professor, Gary Francione!
Posted by CLM

Congratulations on the new homestead! I hope you are settling in comfortable and finding just the right spot for the Goethe Cup. :-)

Wow! Big house for such a petite woman! But then you do have a lot of books. Blessings on your sojourn in the "homestead"!
j in the Abominable Manor

Congrats!!! As soon as the travel budget allows (which should give you ample time to nest), I'm inviting myself for a visit.

It is beautiful and you deserve it.

Congrats, Constance! So exciting! It's lovely.

Very happy for you,

Constance, it looks great! I think you will have a lot of fun here! Congratulations.

Wonderful! I'm sure you'll fix the curtains in a stunning new way. And, who knows, maybe a Brass Bowl is in your future.
-Susann

Constance, it's beautiful! The red door, dark shutters, and grey roof are a lovely combination. I am a big fan of garages in the back of the house--such a nice look, especially compared to the alternative that is so common on the West Coast.

How old is the house, and where is it? Wishing you much happiness in your new home. I always think of you in your one-bedroom apartment, even though you haven't lived there for some time, so this is really different.

Congratulations! I will be coming over for trick-or-treating. Better get plenty of fun-size bars!

It is just beautiful, Constance! I love the cheery red door. You should invite a bunch of strange women from all over New England related only by a strange fascination with some mildly obscure childrens books to come over and see it.

How exciting for you and such a beautiful house, too!!

Congratulations, and see Barb, above.

It looks lovely! And so charming! I wonder what treasures or artifacts you might find in the attic--or basement--or garage?

I think you should have a whist card party ASAP and serve Welsh rabbit in a chafing dish with unfrosted cake for dessert! In fact, I'll bring the cake.

Wishing you all the best!

The house is lovely. Congratulations!

What a charming house, Constance. I love the red door . I hope you will be very happy in your new home. Have you put up the Harvard etchings yet ?

What a wonderful home!!! Congrats!