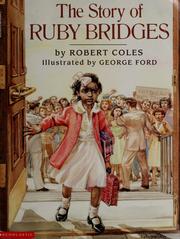 Summary: This is a children’s version of the real story about Ruby Bridges, a six-year-old African American who integrated the all-white William Frantz Elementary School in New Orleans in 1960. Each day she had to walk by angry, vicious protesters as she was escorted by federal marshals to her classroom. The white parents kept their children home so Ruby was taught alone by our friend Barbara Henry. Brought up by a religious family that was proud of what they realized was her place in history, Ruby handled the pressure with dignity and grace beyond her years, praying for the protesters as she passed them each morning. Eventually, other African American children joined her at the school, and after several years, the white families sent their children back to school. Ruby graduated from this elementary school and from high school, and brought up her own family in New Orleans as well.

Audience: This is a great story to introduce civil rights issues to small children, as it is a dramatic story with a winsome heroine that hints at the underlying violence but is not too scary.

Source: I checked out this book from the Boston Public Library. There are a number of books about Ruby Bridges but I recognized the name of Pulitzer-prize winning Robert Coles, so chose this one. I did not know that as a child psychiatrist he had offered to provide counseling to Ruby and met with her weekly during her first year of school (he was stationed in Biloxi). One of my greatest academic regrets is not taking advantage of the opportunity to study with him in college.
Posted by CLM

During my tenure at the Girls' Latin School Alumnae Association I was honored to meet Barbara Henry and present her with our Outstanding Alumna Award. She spoke warmly about her experience with Ruby, the Bridges family and Robert Coles. A wonderful woman, a wise child, a wonderful story. I'm glad there's this new book for children who won't have the personal connection to this story that those of my generation have.

BLA, like GLS, is a school that is representative of the ethnic and socioeconomic diversity of Boston. All of my classmates agree that being exposed to that diversity was a great experience, and I hope your young relative has a good experience too. She won't have to take as much Latin as we did, though! Shame....

That is so nice, Deb! I hope we can have a Ruby Bridges event at the library and ask her to speak.

I attended the BLA graduation last year and was impressed by the diversity of the student body and sense of pride by their families. Alas, my assignment was telling these nice families they could not bring oversized balloons into the Northeastern Arena! We tied them up outside and some got stolen. I think Parker is doing well and running track.