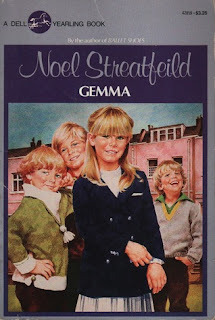 Description: Gemma is a child film star, daughter of actress Rowena Bow, but as she approaches adolescence there have been no parts for a while, which frightens her. When her mother is offered a part in America, Gemma is sent to live with cousins she has never met, 150 miles from London. Gemma is surprised to learn her cousins are talented too: Ann sings, Lydie is a gifted dancer, and Robin is musical. Although initially shocked at the Robinsons’ modest home and hurt her mother has abandoned her, Gemma learns to love her cousins, Aunt Alice, and particularly values her uncle Philip’s sage advice. Afraid of being mocked or pitied as a has-been, Gemma adopts her cousins’ surname Robinson before she joins Ann at the local comprehensive.  But while she is relieved no one has recognized her, she is determined not to be ordinary, so when a big pageant is planned at school, she wants the lead, no matter what it takes.

In the second book, Gemma and Sisters, the three girls and Robin have put together an act and perform around town to entertain senior citizens or to help raise money for nonprofit causes, and become a local sensation. Ann, a conscientious student, worries about the distraction from schoolwork but her parents think performing brings her out of her shell, while Gemma and Lydie love the limelight.  Robin is becoming a talented composer and arranges music for their shows.  Various complications ensue: Lydie injures her hip and nearly destroys her dancing prospects, Rowena suggests Gemma switch schools just as she is about to secure the part of Lady Jane Gray in the school play, and people are beginning to wonder why Gemma seems so familiar. 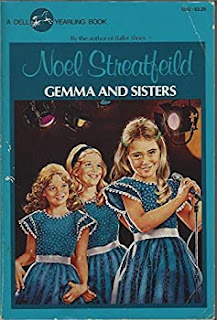 My Impression: Somehow I had never read this series and I am glad to have read it at roughly the same time as Pamela Brown’s The Swish of the Curtain because there are definitely some similarities.  In all ways, however, I think Streatfield’s books are better.  Her characters are more fully developed (although are something of a type from book to book), there is more description of their family life, and there is a lot more humor.  Alice and Philip Robinson are kind, loving, and hard-up parents much like those in Skating Shoes and other books, able to recognize their children’s strengths and weaknesses, and always able to make time to help resolve a crisis. Streatfeild, a vicar’s daughter, would have been very familiar with the proverb: Better is a dinner of herbs where love is, than a stalled ox and hatred therewith.

I like that Gemma resents being sent to live with strangers in what seems like a shabby home, her horror at sharing a room for the first time, and her honesty that she never bothered with schoolwork assigned by her governess so is afraid to go to a real school. She doesn’t adapt instantly but once she does, she is very protective of the Robinsons.  An interesting subplot is that Philip was the first violinist of the local orchestra and has recently developed such rheumatism in his hands, he has been forced to retire young and become a music teacher instead.  No wonder they are worried about money!  I especially enjoy serious Ann and somewhat conceited Lydie who is always plotting (she is a familiar Streatfield character: her family is appalled by her self-absorption and occasional manipulation of the truth but she backs it up with real talent).  And once these children start performing together, they love it and are good at it.  Gemma instinctively is a talented producer and gets the most out of everyone.

However, there is a lot my beloved Noel could have done to make this plot more plausible. Alice brought up Rowena when their mother died and they only live 150 miles apart, yet the Robinsons have never met their cousin?  It would have been much better to situate Rowena and Gemma in Hollywood and have created a reason to fly Gemma to England.  Rowena does not all seem concerned to be away from her daughter for years, yet a film star must make enough money to fly home occasionally.  Finally, even if the Robinsons had never mentioned their famous cousin to anyone in the industrial town of Headstone – and I know if had a film star aunt and cousin, all of you would have heard about it – how could no one recognize her, especially with such an unusual name?

The only two Gemmas I have ever come across are fictional (I am also a big fan of Gemma James in Deborah Crombie’s mystery series). The first person to figure out Gemma's real identity is Lydie’s ballet teacher at the end of the second book, although those who work with her on drama productions sense that she is a real pro and are confused by this.  Of course, allowing her to act and perform in public is asking for trouble but the books are a lot of fun despite these plot weaknesses.  There are two more in the series but I am saving them for a less busy month.  The reading level appears to be the same as other Streatfeild books but they are much shorter, which may be why they are rarely mentioned in discussions of her books. These seemed like an excellent choice for Reading the Theatre Month at Lory’s Entering the Enchanted Castle, although I see she has already read the series.

Source: Personal copies. Click here for my other Streatfeild reviews.
Posted by CLM

I have hazy memories of reading these back when I discovered Streatfeild, and your questions about the plot holes brought them into sharper focus!

I don't recall coming across these books when I was younger. Maybe because I was already in college by then. They do sound good.

I have all of these but with awful photographic covers from the early 80s, and liked them a lot!

I did read these many years ago along with as many other Noel Streatfeild books as I could! Along with so many of my childhood books I don't have them any more, though, and they are not so easy to find. Good questions about the implausibility -- seems a bit sloppy, though Streatfeild comes through on other points.

Funny how I never read a Noel Streatfield book when I was young. Avoided them like the plague to be honest as I was about as far from a ballet school/stagey child as you can possibly imagine. I wanted to read Enid Blyton's books about kids having adventures on the coast and in hidden valleys and abandoned castles. Ballet? Not so much. LOL!

I always especially liked the Streatfeilds about the intrepid orphans! I am guessing I never read the Gemma books as a child because although published in the UK in 1968 this series was apparently not published here until 1986. By then, I was busy reading other things. I read Enid Blyton as well, Cath, both the boarding school stories and all the Adventure and Famous Five books.

LyzzyBee, I saw quite a few cover variations when I looked! But the cover one recalls from childhood is always the right cover even if very wrong. I was looking at my Streatfield shelf and gave a special pat to the first one I owned, which was Thursday's Child.

My friend Carla was the book consultant to the movie, You've Got Mail, and that is why there was a Streatfeild mention and a Betsy-Tacy mention.

It's so funny to see these books in their American Dell paperback editions: those girls look so fancy-pants as compared to how they would have looked on the English illustrations. Hahah

Sound like good Streatfield formula and I would love to read them.

Gemma Jones was the actress who played the Duchess of Duke Stback in the 80s and the matron in Harry Potter, with many roles in between....