This shelf starts out with a WWI theme, beginning with a few Maisie Dobbs books by Jacqueline Winspear (I like this series but stopped reading after they all started to seem the same). Then my Vera Brittain (1893-1970) books!  Ever since I saw the PBS miniseries based on Testament of Youth I have been fascinated by her and her books.  I remember when it was on TV there was an interview with her daughter Shirley Williams, a prominent member of Parliament and later cabinet member.   My mother was paying more attention to British politics than I and had hoped Williams would become the first woman Prime Minister instead of Margaret Thatcher.  Some of you may have seen the 2014 movie of Testament of Youth.  I liked it but wondered whether people unfamiliar with her story really understood. 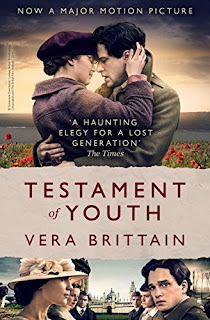 Next to Vera’s books, there is a collection of the letters written by her and the four men she cared about: her brother, her fiancé, and their two friends (try to read this without Kleenex); and a biography.  Next is They Fought in the Fields about the Women’s Land Army, which should obviously be with WWII books; Dangerous by Degrees, about Brittain, her friend Winifred Holtby, Dorothy Sayers and others at Somerville College; Willingly to School, a history of women’s education.  Then there is a book that needs to be higher on my TBR list, Into the Breach, American Women Overseas in World War I by Dorothy and Carl J. Schneider.  Some 25,000 American women crossed the Atlantic to serve overseas from 1914-18.  I have long been fascinated by women’s war service, both in real life and in fiction. 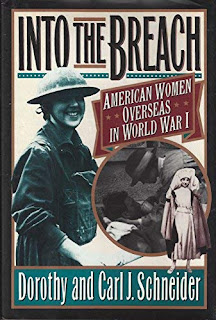 Alma Mater by Helen Horowitz is about the early American women’s colleges and my copy was autographed by the author when I heard her speak at the Radcliffe Institute in 2012.  There are a few random books on this shelf: A Thread of Grace by Mary Doria Russell, a historical novel set in WWII Italy; A Short History of English Literature (this is a folio edition that belonged to my grandmother); Broome Stages by Clemence Dane, which my mother loves so I must try it again sometime; Sixpence House, set in Hay-on-Wye, where I pilgrimaged the day before Diana, Princess of Wales died, and a biography of Evelyn Waugh. 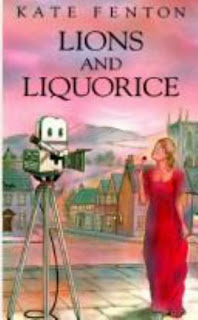 At the other end of the shelf are several books by Kate Fenton but not, ironically, the book I liked so much that I hunted down all her others, Lions and Liquorice (if you borrowed it, confess!).  It is my favorite of the many retellings of Pride and Prejudice.  I rescued the book from a pile of discards in the hallway during my time as a romance editor at Penguin and I read it at one sitting that night, thought it was very clever, wanted to acquire it but my dreadful boss was very negative, saying it was too English (as if). Of course, the wannabe Jane Austens turned into a very popular and profitable subgenre.   It was eventually retitled Vanity and Vexation and published by St. Martin’s.   Oooh, I see Fenton has a brand new book called The Time of Her Life, so I will need to make room on this shelf. . .

This little sticker is from an event in 2016 honoring women who worked at the Charlestown Navy Yard during World War II.

I've read the Maisie Dobbs books and would happily read just about all of the books on that shelf. What a wonderful selection. I actually own Testament of Youth but shamefully have not read it yet. Off to to investigate Dangerous by Degrees.

What a great bookshelf, I almost featured a shelf with Testament of Experience on it, my daughter-in-law who is a history teacher now has my copy of Testament of Youth. I think the TV series was much better than the film which just wasn't long enough to be able to pack much in.

There are lots of books here I am interested in .... but especially:

I know very little about Vera Brittain and I should read something by or about her. You have quite a collection. I did not get along with the Maisie Dobbs books (I read the first three books) but there are so many people who love them that I have been tempted to try them again, maybe starting later in the series. Last I heard, she lives in Ojai, California which is sort of near to where I live.

Into the Breach, American Women Overseas in World War I sounds very interesting. This is the second time I have read about A Thread of Grace by Mary Doria Russell here. It sounds like a good book for me.

Tracy, I rarely say this but the TV adaptation of Testament of Youth was even better than the book (which I like so much I made my book group read it years ago). I wonder if you could get it from the library or would it only be in video format? https://www.imdb.com/title/tt0078699/?ref_=nm_knf_t1
The recent movie was not bad but as Katrina mentioned, it is hard to capture the subtleties in so little time.

I really liked the first Maisie Dobbs and went to an author event several years ago at which I told Ms. Winspear that I enjoyed them particularly because they reminded me of Testament of Youth and Upstairs Downstairs and had she been influenced by either? She seemed quite offended by my question and implied that Upstairs Downstairs (which I believe was very popular in Britain and in the US) was not the type of show she would have watched. She said she couldn’t remember if she’d ever read Testament. I thought this was very snooty of her. However, I am interested in her memoir, which is coming out in November:
https://www.penguinrandomhouse.com/books/653642/this-time-next-year-well-be-laughing-by-jacqueline-winspear/ I didn’t realize she lived in the US. I used to work with a really nice guy who lived in Ojai.

If Mary Doria Russell’s books weren’t all so different from each other, I am sure she would be more acclaimed. The first two books are good but quite odd – Jesuits in space. Brad Pitt bought the rights to The Sparrow years ago but I suppose lost interest. Her other books are all historical fiction, including two set in the 19th century I haven’t read with a western theme. A Thread of Grace is interesting because it is about the Resistance in Italy whereas we are more used to reading about it in France. My book group won a call from the author to discuss the book with us, which we mostly enjoyed.

I think I have, temporarily at least, overdosed on WWII historical fiction. It took dozens of books to happen but I was particularly looking forward to a book called Liberation by a duo that includes Imogen Robertson, who wrote a historical mystery I liked so much I gave it to my sister. Liberation may be based on a true story/woman but I found the book very disappointing. I disliked everyone in it except the main character’s husband.

I was so excited to see Somerville College when I first visited Oxford. Of course, there are other more beautiful colleges but it has great atmosphere.

I saw the excellently done TV series of Testament of Youth well before reading the book and enjoyed the series more than the book. Perhaps because it wasn't dramatised I found Testament of Experience better reading. I never got round to Testament of Friendship.
As an SF buff, I've only ever read Mary Doria Russell's first two books. They're not all that odd if you have that in your background.

Much as I would like to give the Testament of Youth TV series a try, I don't know that I will be able to access it any time soon.

Interesting story about Winspear. Sometimes authors disappoint us, but then I haven't been to many author events. Ojai is a very nice place, although I have only been there a couple of times, many years ago. There was a used bookstore there where most of the books were outdoors. I worked at Santa Barbara Community College and some of the staff and faculty lived there.

I think A Thread of Grace would be very interesting. I am not yet tired of historical fiction on World War II, although currently I do prefer books written during the years of World War II or just before or after.