The Daughters of Erietown by Connie Schultz 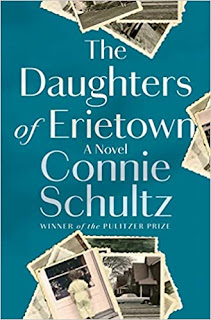 Plot: This is a gritty three-generation family saga set in small-town Ohio.  Ellie Fetters is the smartest girl in her high school class of ‘56 but it doesn’t occur to anyone but her aunt that she should go to college.   Her boyfriend is not much of a student but is offered a basketball scholarship to Kent State.  Just when Ellie is about to get into nursing school and Brick is about to start believing in himself, she gets pregnant.   He stands by her, as the saying used to go, but is it possible for these teens to create a stable family?   Brick has a loving mother but a physically abusive father, while Ellie’s parents abandoned her, and she was brought up by her grandparents.  They care about each other but that may not be enough.  In this story, the women are the strongest characters but even they do not always make the right decisions.
My Impressions: This was a fast and enjoyable read, although at times predictable, about resilient women who do what is necessary to help their families survive, even when their hearts are breaking.  Schultz does a good job making us care about the characters, particularly Ellie and her grandmother and Ellie’s daughter Samantha (Sam).  Although Ellie doesn’t make it to nursing school the reader cheers for her when she eventually achieves a career as nurse’s aide and takes pride in her achievement, and Sam, who has choices when she graduates from Kent State, chooses to return to Erietown where she thinks she can make a difference instead of preppy Shaker Heights (where she could maybe get a cameo in Little Fires Everywhere).

There are little touches that make the story very poignant and convincing: one was when Ellie’s grandmother, Ada, is grateful it is her husband’s poker night so she can undress in her bedroom instead of hiding in the bedroom closet (after 51 years of marriage).  Another is when Rosie, a character who causes a lot of trouble, runs away from home and reaches the Erietown Greyhound Station without knowing her aunt’s phone number.  A kindhearted African American woman who works at the ticket office drives Rosie to the harbor neighborhood, although she is worried about the reception she might get from people who don’t think she should drive through their neighborhood and despite Rosie having used the word "colored" to describe her.
Schultz won the Pulitzer Prize for her Cleveland Plain Dealer columns and is married to Sherrod Brown (who was my first choice – and doubtless hers – to be HRC’s running mate).  More importantly, she is a smart and sarcastic person who sounds like a kindred spirit, which is one of the reasons I wanted to read this book and I am glad I did.  I am curious whether she was born Connie or doesn’t like Constance (because I dislike and don't use Connie, I am always curious about those who have opted for it).  Like her character, Sam, she is an alumna of Kent State where she is a writer in residence at its Journalism School.  Here is a recent article.

Ooh! I did my MLS at Kent State. This looks fascinating. Thanks for the review!