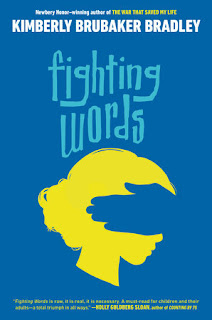 Plot: Delicious Roberts, known as Della, is a feisty but vulnerable fourth grader whose mother is incarcerated, but has always had her older sister Suki to take care of her.  Yet she is used to being self-reliant, and she’s had to be because the adults in her world don’t understand what she is dealing with. Her teacher assigns family trees although she must know Della is in foster care and doesn’t have the type of family situation that is remotely sharable.  She and Suki lost everything they owned when they ran away from their mother’s former boyfriend and he burned all their belongings.  Now Suki, who has always been Della’s rock, is acting erratically and the girls have started squabbling for the first time.  When Suki tries to commit suicide, it is up to Della to take control and help her sister get help.
My Impressions: This is a beautifully written book about sisters and the very difficult subject of child abuse.  I am a huge fan of Bradley’s two books about Ada and her brother Jamie, The War That Saved My Life* and The War I Finally Won, and was delighted when my then eleven-year-old niece loved them as much as I did.  I even gave the first book to my History of Children’s Literature professor for Christmas (she does not seem to have read anything published this century).  So I was excited when I snagged an ARC at ALA Midwinter but, initially, I was a little disappointed that Bradley had chosen to write a gritty novel set in the unpalatable present instead of more historical fiction.

However, just as she managed to weave difficult truths with the whimsy of everyday life and the backdrop of war into two irresistible books about a flawed but delightful heroine, here, Bradley immediately made me care about Della and Suki, recognizing how much their story needed to be told.  From the minute Della takes on an insensitive teacher and gets the principal on her side, I was charmed, and I suffered with both sisters as Della slowly reveals what happened to them and why they fled from their former home.   The teen or adult reader guesses what’s going to happen but I certainly would have had no clue at Della’s age what was going on.  It also gives a realistic picture of foster care which is rare.  The book is not just intended for victims of sexual abuse but perhaps also for girls like my former self, to help us be better friends to those in trouble.

I move in the kind of circles where censorship and banned books are not infrequent topics.  I have no doubt some parents would not want their children reading this book (and won’t bother to read it before complaining) but it is much more than the “problem novels” that were popular in the 70s.  It is a moving story about appealing characters and I think most readers about 10 and up could handle the topic and would like it.  Here is an interview with Bradley where she discusses her motivation for writing the book.

I’ve learned that some things are almost impossible to talk about because they’re things no one wants to know.

That’s the first hard thing I’m telling you.  It might not look hard, not yet, but it’s very nearly the hardest thing of all.

Sometimes you’ve got a story you need to find the courage to tell. 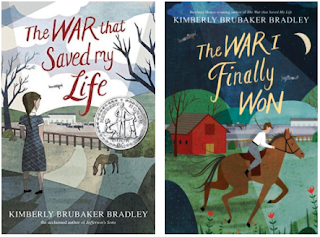 Source: I received a copy of this book from the publisher. Recommended.

* I still think The War That Saved My Life should have won the Newbery Medal in 2017 instead of being an Honor Book.  It's that good!  You should read it too!
Posted by CLM