This is a very random shelf with six suspense novels by Helen MacInnes, eight novels of varying genre by Catherine Gaskin, seven historical novels by Valerie Anand and, finally, two by W.E.B. Griffin, hidden behind the Fred Lynn bobblehead.  Old W.E.B. (and his son, now writing the books) has other shelves and deserves his own post another time. 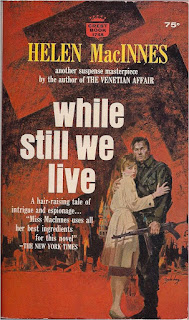 My mother introduced me to Helen MacInnes' books, handing me her hardcover of Above Suspicion (1941) long ago.  MacInnes was inspired by Nazi activities she and her husband observed on their honeymoon in Bavaria.  The book was made into a movie starring Joan Crawford and Fred MacMurray.   MacInnes was born in Scotland and met her husband at the University of Glasgow.  Gilbert Highet became a classics professor and taught at Oxford before moving to New York in 1938 to become a professor at Columbia.   He wrote a number of books and is best known for The Classical Tradition (1949) and Poets in a Landscape (1957).  While he was becoming an academic star, Helen became one of the first women to write espionage thrillers and women took a prominent role in the stories, often drawn into a dangerous situation merely by being in the wrong place (the new covers are less damsel-in-distress as you can see below).  In all, she wrote 21 books, most of which were bestsellers and four were made into movies.  I enjoyed all except one where the heroine gets killed on the last page (what was Helen thinking?) but if you can only read one it should be While Still We Live, which remains my favorite WWII book.  It's the kind of book that when you come across an extra copy you grab it and think about who in your life most deserves such a treat. 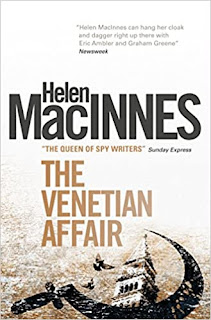 Listen to Helen here!  It’s an interesting talk she did as The Venetian Affair was published, and you can hear that she retained a little of her Scottish accent even after years in the US. I am guessing it was a speech at Columbia because at the beginning she mentions Mrs. Van Doren, a writer who was married to a famous Columbia English professor, Mark Van Doren, and their son Charles was the infamous winner of the rigged game show.  My grandmother was also a Columbia faculty wife and I wonder if she was invited to this talk.  She was a literary snob but I think would have been willing to hang with her incredibly cool peers. 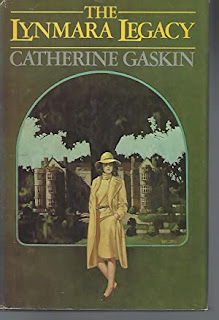 Maybe I shelved Catherine Gaskin next to MacInnes because she wrote at least one book that was a Cold War thriller, The File on Devlin (do not confuse her with Catherine Gavin who wrote historical fiction; I own two which are good but not great).  But most of Gaskin's books are historical fiction and, while I like them all, my favorite is The Lynmara Legacy, now available as an eBook, a sort-of family saga about a woman determined to avenge insults to her mother.   I once lent my hardcover copy to a coworker who, although I didn’t know it, was plotting to get me fired.  Years later, although I was still very bitter, mutual friends dragged me to her birthday party to bring about a reconciliation.   When I saw my book on her shelf with a post-it on the cover in my handwriting that said, “Return to Constance!”  I indignantly put it in my purse and went home.  I don’t know why it isn’t on the shelf with the others because you surely don’t think I would have been foolish enough to lend it again! 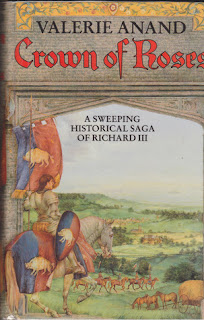 Valerie Anand is also a gifted writer of historical fiction.  Crown of Roses (1989) is a standalone about Richard III that I will certainly hold onto.  She also wrote two historical series, The Bridges Over Time and a Norman series (this about serfs whose lives are so miserable I could never bring myself to reread them).  To a Native Shore (1984), about a young woman who marries an Indian, and has a hard time adjusting after she moves to India with him, appears to be inspired by her own experience. She is in her 80s now, writing historical Elizabethan mysteries under the name Fiona Buckley.  I am very discriminating about historical mysteries so have not tried these yet.

What do you do when you have hardcovers and paperbacks of an author?  Do you shelve them alphabetically or in series order or by pub date?  I tend to organize by format but am not always consistent - sometimes it depends on the bookcase!

Off the Blog: Like most people I know, I am very saddened by the death of Justice Ruth Bader Ginsburg on Friday.  She taught at Rutgers Law School before I attended but I admired her long before I become a lawyer.   I visited the Supreme Court several times while I was in law school to hear oral argument and once in 2008 for an elegant dinner with the Supreme Court Historical Society.  I met several of the Justices but Justice Ginsburg did not attend the dinner, which was disappointing. Then she was honored at Radcliffe Day in 2015, which I attended with my parents.  She was frail but indomitable, and she had the large tent full of people completely silent, straining for every word and providing several standing ovations.

What an interesting blogpost! I read a lot of Helen MacInnes books from the library back in the 1970s and have just started to gather her books again. I loved Evelyn Anthony too. I also read Catherine Gaskin books back then too, but somehow Valerie Anand went completely past me, so that's another author to look out for. Thanks. I'm so glad you eventually got that book back.

This is a lovely post, sorry I am so late to visit. I enjoyed many Helen MacInnes books when I was younger, and I have some on my TBR piles. I think I can locate my copy of While We Still Live, I will have to pull it off the shelf soon.

Catherine Gaskin is not an author that I am familiar with. I have read a lot of historical mysteries but not so much historical fiction. Valerie Anand is also new to me, and it is interesting that she also writes as Fiona Buckley. I have heard the name, although I haven't tried her books.

I am not very organized with my book shelving, I am always struggling to find places for books. I do usually separate out hardcover books and paperbacks, because it is just easier. Mostly the books on my shelves are ones I haven't read yet.

Except for While Still We Live which I reread periodically, I haven't reread MacInnes for years but I think she will hold up well and I loved finding a video of her speaking. I haven't had a chance to ask my mother what she knows about Highet's and MacInnes's years at Columbia but I know she and their son were at Harvard about the same time and she kept her eyes open in case Helen happened to be visiting (the Radcliffe dorms were far away from the Harvard houses so it is unlikely their paths would have crossed but that doesn't mean one shouldn't be alert!).

Evelyn Anthony was certainly in the library with others of this era like Gaskin but I never picked any up. A review on Goodreads inspired me to read all her suspense novels about six years ago and I really enjoyed them (there may even be one or two left my system doesn't own). Her female characters are very brave and asked to do scary things yet are treated with incredible sexism, which I am sure would have been typical of the era (or any era!). I thought some Anthony books would turn up at used book sales but I only see her biographies which don't interest me as much. A friend just had a granddaughter named Evelyn yesterday - it is not a common name these days but I like it.

Valerie Anand is not as well known but has carved out a good career for herself once she realized mysteries are more profitable than most historical fiction.

This is absolutely my favorite kind of post nowadays. I love browsing the shelves of others, especially book bloggers. You never know what you are going to spot, what memories will be triggered, or where your snooping will take you after looking at what's on someone else's shelves. Thanks for sharing.