When I took the Radcliffe Publishing Course a number of years ago, one of our assignments was to read a manuscript and write a Reader’s Report, just as Editorial Assistants do.  We had to submit the report before the course began.  Unfortunately, I did not like the book (although  I was intrigued that it was set in Peekskill, NY where my mother had lived as a child) and was baffled by the denouement. There was a pivotal scene near the end so I shrugged and wrote something like, “This story could only end in unequivocal death . . .”

Weeks later, we were very excited to have a real editor come from New York to talk to us about the manuscript.  She mingled with us at lunch and seemed very elegant and knowledgeable.   Later we sat outside, clustered around her attentively, and she read the first sentence aloud with great pleasure:

On the day he lost his right foot, Walter Van Brunt had been haunted, however haphazardly, by ghosts of the past.

She waited for us to tell us how brilliant it was but, having read and analyzed it, we were sure she had provided a manuscript from the slush pile to trick us and the intervening weeks had not convinced us otherwise.   I think my classmates piled on the criticism while this pleasant woman grew more and more annoyed with us.   Finally, Lindy Hess, the beloved director of the program turned to me, perhaps hoping I would smooth the waters.  “What did you think?” she asked.   Nervously, I said, “Well, the ending was abrupt but I felt that the violent death was . . . inevitable.”

The editor stared at me, both annoyed and puzzled, and said there was no violent death at the end of the book.  Someone else said, "Yes, there was!"  Then she lost it and told us this book was written by a very talented author and we were all lacking in good taste.  We hung our heads.  It turned out her assistant had sent us an incomplete manuscript: there was a whole missing section/conclusion in which the character in question made a speedy recovery!
Several months later, the book got a front page New York Times Book Review!   So she was right and that was an early sign that literary fiction was not my thing.  The editor later wrote several books herself which all sounded like more fun than World’s End.

What made me start thinking about Boyle?  He is admired but not really well known; however, I happened to see on Twitter that Nancy Pearl features him in her new book.  I had not thought of him for many years but have no doubt he is quite a personality and full of good stories.  It amuses me that following her Boston Public Library talk yesterday, Nancy Pearl and I were discussing Mary Stolz (Nancy reminded me that Stolz had two Newbery honor books) and today she’s moved on to Boyle.   Nancy Pearl's taste is much broader than mine, and the long ago editor would be pleased. 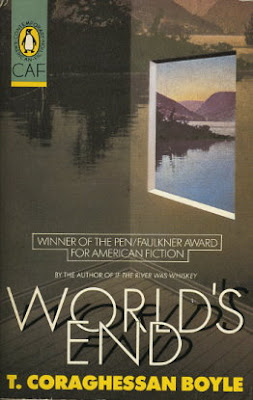 The Radcliffe Publishing Course was a lot of fun.  It was a five or six-week summer program for recent college graduates interested in book or magazine publishing.  We all lived together in a dorm in Cambridge, a few doors down from mystery writer Robert Parker (Lindy invited him for sherry but he never came).  At the end of the summer, many of us moved to New York for poorly paid publishing jobs.   Sadly, Radcliffe sold the Publishing Course to Columbia in 2000.
Posted by CLM

Most of these names were unfamiliar to me. But I keep thinking about that anecdote: the poor students who thought they were being tested, the lady who couldn't understand why the students didn't get it, and the middle-man/woman who had (mistakenly) not shared key information. What a trying day that must have been, amusing only in hindsight.

It's quite a shame she got so huffy, though. I think the biggest mistake experts or experienced people make is thinking they cannot learn anything from enthusiastic newbies.

I agree with the comments above. I was amazed that the editor would expect everyone to praise the book... that doesn't happen with any book, any author. But it does sound like a fun course.

T.C. Boyle lives in Montecito, a rich area near to Santa Barbara. That is mostly all I know about him. Haven't read any of his books, although I may try his short stories some day.

Well, I don't think I would have liked the manuscript more if I'd been given the whole thing but at least my feedback would not have sounded so completely off base! And editor Amanda certainly should have tried to find out why we reacted the way we did instead of discounting our contributions.

The course was very intense but a lot of fun. The woman who ran it had worked at Doubleday and had many successes, including a book called How to Stay Happily Married, written by a husband/wife team. She and the husband got romantically involved - awkward! - then married. Eventually, she moved to Cambridge and ran the course, getting her old friends from publishing to come lecture to us.

At the end of the summer, I moved to New York to work at what was then Bantam Doubleday Dell at the end of August with a friend who had taken the publishing course with me. Her mother thought we should live in a convent that took in nice girls like us but fortunately for Jeanmarie we moved into an apartment with some cute guys, one of whom worked with my sister. Jeanmarie married a doctor who worked with one of our new roommates - or as her mother liked to say apartment-mates. Anyway, when we saw in September that this book we had disliked had been reviewed on the front page of the New York Times Book Review, we felt partly chastened for our bad taste and partly proud that we were part of the publishing world!

Tracy, I think Nancy Pearl went to Montecito to interview him for her new book. He sounds like a very quirky guy. I haven't been to that part of California. Actually, since I left publishing and work-related trips to LA or SF, I have only been to San Diego a couple times to visit my college roommate.

I plan to read the new Nancy Pearl book someday, but I will wait until I can get it for less.

It is has been over 40 years since I have been to San Diego but I remember it as a lovely place. Santa Barbara and surrounding areas are wonderful, and I would never leave willingly. But very expensive to live in.

The editor who loved T.C. Boyle was interviewed by Ken Burns on the Hemingway miniseries! Clearly, her taste is very different from mine as I don't like Hemingway either (books or personality).