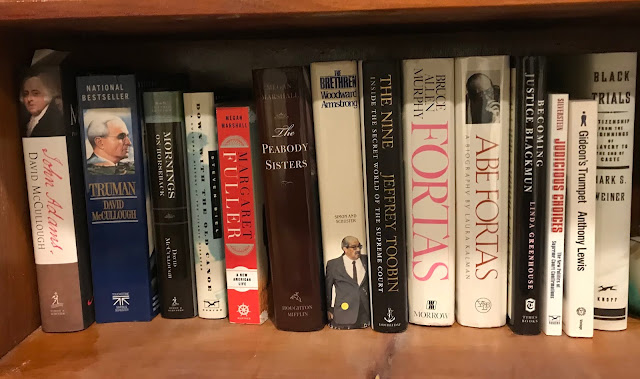 This is an American History shelf that features some admired authors.  On the left are several books by David McCullough.   My parents heard him speak at Roxbury Latin and asked him to autograph John Adams (2001) for me.  I remember my friend Duncan read Truman (1992) aloud to his newborn when it first came out and that baby just got engaged!  I listened to the audio of Mornings on Horseback (1981)(about Theodore Roosevelt) as I drove to Quebec a year ago.   I also really liked The Wright Brothers (2015) but do not own that one.   Next is Down with the Old Canoe, A Cultural History of the Titanic Disaster (1996) by Steven Biel.  I have a separate section for books about the Titanic so this book is in the wrong place!  I think I got it mixed up with Tippecanoe and Tyler too, the 1840 campaign song my father told me about long ago. 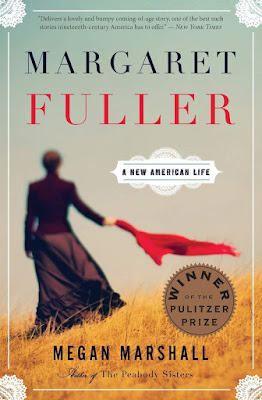 Megan Marshall is a talented historian who went to Radcliffe.  I have heard her speak often so both these books are autographed.  At one event, she told a fascinating story – that her parents bought a house in California that had been owned by two elderly ladies from Boston. The house was sold with all their possessions, including their Alcotts and other old fashioned books, so Megan grew up surrounded by these things and became fascinated with New England literary history before coming east to college.  Her book about Margaret Fuller won the Pulitzer Prize and The Peabody Sisters (one of whom married Nathaniel Hawthorne) (2005) won several other prizes.
How suitable to look at my Supreme Court books the week of Ruth Bader Ginsburg’s funeral, a very sad time for our country!  I was interested in the Supreme Court before law school and took a seminar my last year that led to my greatest academic honor and a fabulous dinner sponsored by the Supreme Court Historical Society in 2008.  The Brethren (1979) by Bob Woodward is about the Burger Supreme Court.  The Nine (2007) by my college classmate Jeff Toobin is about the more recent Court with Justice Sandra Day O’Connor as the all-important swing voter (she resigned early from the Supreme Court because of her husband’s illness).
Then there are two books about Justice Abe Fortas; one written by Laura Kalman (1990), a law professor I got to know through our shared love of Janet Lambert’s books.  Becoming Justice Blackmun (2005) is written by another Radcliffe alumna, Linda Greenhouse, the long-time, highly respected New York Times reporter who covered the Supreme Court.  This is also autographed.  Judicious Choices: The New Politics of Supreme Court Confirmations is especially timely as today the alleged president will announce the nomination of Amy Coney Barrett, a candidate with selective support of Christian values (which I feel comfortable saying, as a practicing Catholic myself) and frightening support of inhumane right wing beliefs. Another college classmate, Dave DeCosse of Santa Clara University, has written an interesting article for the National Catholic Reporter in which he explains church teaching does not prohibit a Catholic from voting for a pro-choice candidate.

Back to books!  In 1963, when Abe Fortas was in private practice, he represented Gideon Wainwright, an indigent black man who asked for a lawyer.  This was a landmark case that ultimately held state courts are required under the Sixth Amendment to provide counsel in criminal cases for defendants unable to afford their own lawyers (the right already existed in federal cases).  Anthony Lewis, a Pulitzer-prizewinning New York Times columnist wrote about this case in Gideon’s Trumpet (1964) (mystery fans will be impressed he won an Edgar award for the book).  During law school, I decided that while no one had time to read much during the academic year, we might be able to do a community read of a pivotal book like Gideon’s Trumpet.  Long story short, I announced, begged, coaxed, and I think the only person who showed up was my best friend.  For a lot of people, there was so much reading in law school they couldn’t handle any more, whereas I couldn’t stop, although I certainly read fewer during those four years. 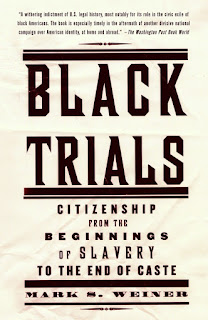 “This book is the best of its kind—a serious, deeply felt reflection on the weight of history on contemporary affairs. Weiner, a historian/attorney at Rutgers School of Law, examines how court proceedings involving black people—and whites trying to assist them—have served as windows onto race relations and the power of whites over blacks in the U.S. from its earliest days. Using specific cases (such as those of the Amistad, the Scottsboro Boys, Black Panther Huey Newton and Mumia Abu-Jamal), he charts changes in Americans' civic inclusiveness—i.e., "what it means to be an American," and whether it includes blacks—and the long struggle for civic inclusiveness in the U.S., a struggle not yet over. . .”

This fascinating book was written by my Constitutional Law professor, one of my best law school teachers, a law school classmate of Cory Booker’s.

I can guarantee that I don't have any of the books on your shelf, but what an interesting post. I watch CNN and the news from the US is really worrying, you're in an even worse place than the UK is, and that's saying something. Some years ago an American blogger said to me that she was glad that the US had religion separate from politics unlike in the UK, but it seems to me to be the opposite in reality, no matter what your rules say. Very few people in the UK bother about religion and we automatically distrust anyone who is overtly religious, especially politicians!

Like Katrina, I have none of these books. History is one of my worst subjects, along with geography. My husband is much more knowledgeable about history, but he reads mostly social history. Although, as I look on his shelves, I see a lot of history related topics. (My subjects were math and psychology, not that I remember much of those either, after nearly 50 years.)

Maybe that is why I enjoy reading historical mysteries and fiction, to get more of an idea about history.

Anyway, it is a very interesting shelf and I am impressed with all your studies.