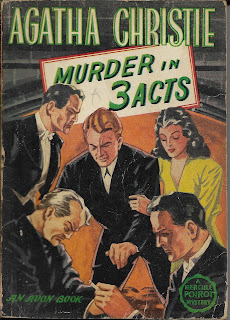 Description: Sir Charles Cartwright is a retired actor who has built a charming home in Cornwall where he enjoys entertaining.  At a house party that includes guests from London as well as locals, his secretary warns the group will be 13 at dinner unless she joins them. Bad luck does follow when one of the guests collapses and dies after taking a sip of his cocktail.  Reverend Babbington’s death is not considered suspicious even by a prominent guest, Hercule Poirot, but when an identical death takes place soon after – and with many of the same guests – it is time for the great detective to get involved.  He joins the amateur sleuths, Sir Charles; Egg Lytton Gore, a young woman with a crush on Sir Charles, and Mr. Satterthwaite, a middle-aged snob who is welcome in the best homes.  Poirot grasps clearly that the two murders must be connected, recognizing if he can find the motive for one, he will be able to unveil the murderer.

My Impression: This story is told in three “acts”: Suspicion, Certainty, and Discovery, in keeping with Christie’s love of the theatre.  In the first act, a kindly minister with no apparent enemies dies suddenly.  The glass he drank from is tested but has no suspicious residue so the authorities conclude there was no foul play.  Sir Charles believes Miss Lytton Gore is romantically interested in someone closer to her age and leaves town for the Riviera.   In the second act, Sir Charles and Mr. Satterthwaite meet up in Monte Carlo where they read of the death of another who had been at Sir Charles’ home, his old friend Sir Bartholomew Strange, a Harley Street nerve specialist (which sounds better than a psychiatrist but I assume that is what he was) who had been hosting friends at his home in Yorkshire.  When they realize many of the same guests were at both events, the men are convinced Strange’s death was also murder.  Along with Egg, they begin an earnest investigation.  In the third act of the book, Poirot reappears to join their detecting, admitting he was wrong not to pay more attention to Sir Charles’ initial concern that Reverend Babbington’s death was unnatural.  Naturally, Poirot sees through the red herrings, although it takes time:

Hercule Poirot’s voice was dreamy.  He seemed to be addressing himself to space rather than to his listeners:

“To reconstruct the crime – that is the aim of the detective.  To reconstruct a crime, you must place one fact upon another just as you place one card on another in building a house of cards.  And if the facts will not fit, if the card will not balance – well, you must start your house again, or else it will fall.” 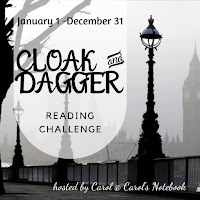 Poirot appears to unravel the threads of this mystery and bring down the curtain.  The Agatha Christie Companion reminds us that Christie loved the intricacies of poison, which is prominent in this book, as well as the theatre. However, the story is not as compelling as some of her other books, although it was the first of Christie’s books to sell 10,000 copies in its first year.  I do like books with house parties but disaster strikes at this one just as the guests are arriving!  For those keeping track at home, Mr. Satterthwaite also appears in Christie’s Harley Quin stories.

This is at least my tenth book for Carol's 2022 Cloak and Dagger Reading Challenge.  I also chose it for Reading the Theatre with Lory at Entering the Enchanted Castle.

Are you aware that this novel is one of the few cases where the US and UK editions had significant differences? The motive of murder was different. I am not sure which edition used the title Murder in Three Acts and which used the title Three Act Tragedy. With the volume of reissues and eBooks, etc. it can now be difficult to know if you are reading the original UK or US version, as they are often not clear in publication history.

(By the way, The Moving Finger is the other Christie novel with significant differences between UK and US editions.)

I haven't read this one, yet, but I do love Christie's Hercule Poirot novels. I just need to find the time to read some more of them. :)

I certainly haven't read this one but I must've seen the David Suchet version... I just can't remember it!

I read this one last year and I regret that I did not review it. I remember liking it a lot. I enjoyed Mr. Satterthwaite in the Harley Quin stories that I have read.

I enjoy theatrical mysteries but I've not read any of Christie's. I'd also like to check out her plays. Thanks for participating again in RTT this year!

I didn't think this was one of her best but I suppose that is partly because I prefer the non-Poirot books!