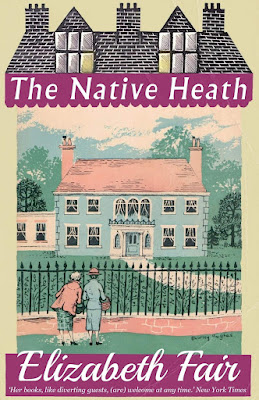 Description: Julia Dunstan, a recent widow of a certain age, is delighted to learn she has inherited her uncle’s home, Belmont House, in the village of Goatstock. Having lived overseas for many years, she feels she has not had a settled home. Embracing the idea of returning to her native heath, she invites a cousin she has not seen since childhood, stolid Dora Duckworth; her husband’s nephew, Robert; and a former family retainer, now firmly called “Nanny;” to come live with her. Julia is eager to be part of village life and to renew acquaintance with another cousin who lives nearby, Francis Heswald. Goatstock is unsurprisingly full of quirky characters, most of whom are quite intrigued by the newcomers, including the two who are caught peeping through the railings when they think the house is still empty, as captured on the cover. Like Emma Woodhouse, Julia takes an interest in those around her and likes nothing better than to organize them.

My Impression: I had not previously come across Elizabeth Fair so definitely would not have read this book had it not been rescued by Dean Street Press. Her writing is subtler than D.E. Stevenson's and nearly as amusing. I suspect particularly liked it because I identified with Julia. She sees things the way she wants them to be but so often those around her do not behave as she would prefer, particularly her cousin Dora, who is as prosaic as Julia is creative. She is constantly having to regroup. A quote from Emma could easily be voiced by Julia: “There are people, who the more you do for them, the less they will do for themselves.” Robert is another who does not behave quite as she hopes:

Robert was her late husband’s nephew, and like all the Dunstans he was tall and goodlooking. For this Julia could forgive him a lot. She took the parcel and explained smilingly that it was too late to cook the fish for lunch today, so he would have to put up with eggs again. Robert said that didn’t matter; the fish was so fresh that it would certainly keep till tomorrow, or else they could have it for supper.

This was not quite what he had been meant to say. An apology for his lateness, a hope that all these eggs would not disagree with his aunt, would have sounded better. But Julia again forgave him. She remembered how important it was to think good thoughts; and she remembered too that her cousin Francis Hesward was coming to see her that afternoon.

Query: I don’t eat fish but shouldn’t it keep for more than a day? It’s 1954 and Julia has spent a lot of money upgrading the house; wouldn’t she have a refrigerator?  Or an ice box?  Or one of those handy streams used by the Swallows and Amazons to keep things cool?
Julia is eager to see her cousin Francis, who was an admirer of hers twenty years ago and is now an unpublished historian living in a nearby village. He had long ago lost touch with his cousins and is wary of a forced acquaintance now but Julia is persistent and soon she is visiting him at the modest home he has retained on a property that is primarily rented out:

“It’s charming,” Julia said enthusiastically. “And what a lot of books! I’m dreadfully ignorant, but I mean to do a great deal of reading, once I’ve settled in. I shall know where to come for books!”
"I’m afraid you may not find much to interest you here,” Francis replied. He did not like lending books, and the suspicion crossed his mind that Julia had only that moment decided to do a great deal of reading. But this unworthy thought was quickly forgotten . . .

Well, some of us have learned the hard way to be wary of lending books, so who can blame him?  Other than Julia’s whimsical reflections on those around her, most of the dramatic action involves the pursuit of the minister by Miss Brigg, one of the single ladies of his congregation, much to the distress of the sister who is his housekeeper and wants to keep her unpaid full-time job. In a scandalous episode, Miss Brigg tries to make the minister look good by devious means that infuriate Lady Finch, the local gorgon:

“But, Aunt Finch, could she – could she have you up for slander? As you can’t prove it, I mean.”

“Not if I said it to her,” Lady Finch answered confidently. “Slander is saying what you think about someone to other people.”

Since they had already said what they thought about Miss Brigg to Marian Prentice, and Robert Dunstan, and the man who brought the groceries, Harriet did not find this very consoling.

Admittedly, not a lot happens in the book – except the final twist which I will admit surprised me; maybe I was reading too quickly – and I could have done with a little more plot; however, Fair makes the minutiae of village life very entertaining.  And I really like how Scott at Furrowed Middlebrow was able to retain the charm of the original cover. 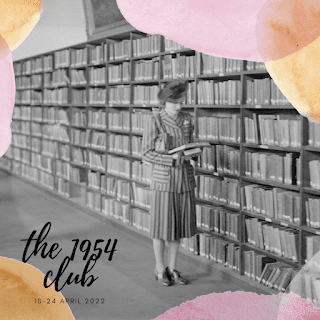 This review is for the #1954Club, hosted by Simon and Karen, in which bloggers are invited to read and review books that were published in a chosen year.

Ah, thank you; I should have checked last night. According to this article, they had become common in American homes by the 1940s:

I love the covers on the Furrowed Middlebrow books, but some of the stories seem a bit too quiet for me. On the other hand, when reading this book, one would certainly learn about the times.

I am currently reading Because of Sam by Molly Clavering, a book reprinted by Dean Street Press that Cath reviewed for the 1954 Club and I am enjoying it a lot.

Well, it sounds pretty good to me. But then, you can't go too wrong with a Dean Street Press book!

Davida is right, one can't go wrong with a Dean Street Press book.

Tracy, it is true that not much happens, which perhaps is why the humor is so important. I wasn't thrilled with Cranford by Elizabeth Gaskell which is similarly full of neighborhood gossip because it didn't seem to be going anywhere - and the descriptions of genteel poverty made me very sad. However, that is often how I feel about cozy mysteries, that there is too much filler and not enough crime or intricacy.

As someone else pointed out, fridges didn't become common in the UK until the 1960s. My grandmother never got one. She had what she called a 'safe' out in the backyard with a mesh door where things were kept cool in the summer. I've never heard anyone else mention such a thing so have no idea whether they were common or just something she had.

I've a couple of Elizabeth Fair books on my Kindle, not this one, so am pleased to hear you liked this as it bodes well for those two. So far, I've loved all of the Dean St. Press books I've read, I love their gentleness and depictions of the lives of ordinary people. Plan to read a few more this summer.

Love the conversation about fridges in 1950s UK, or the absence thereof! I wouldn't have thought about that detail, but one of the fun things a club can bring out.

I really enjoyed this one, too - I agree with your comparison with D.E. Stevenson, although with maybe a little less plot. I love the cover, too, those infamous railings! I think the plot twist at the end WAS a bit sudden; I wonder if she had a word count or was doing it for a magazine originally and had to fit a certain length.