The Eagle of the Ninth by Rosemary Sutcliff #1954Club

This is a special guest review of The Eagle of the Ninth by Rosemary Sutcliff for the #1954Club, hosted by StuckinaBook and Kaggsy’s Bookish Ramblings, from my mother, Stephanie Martin, in honor of one of her favorite authors: 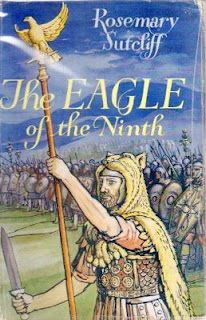 When I made my long-anticipated visit to Hadrian’s Wall in northern England, I knew a lot about the history and archaeology of the area, but I wasn’t thinking about any of that. My mind was focused on a young Roman soldier named Marcus whom I had read about years before. And that goes to show that when Rosemary Sutcliff’s characters get a grip on you, they never let go.
The hero of The Eagle of the Ninth is Centurion Marcus Flavius Aquila, whom we meet as he takes command of a fort in Roman-occupied Britain. Although he misses his farm not far from Rome, he is excited about his new military career. His ambitions are to rise to a high army position and to find out what became of the Ninth Legion, a famed Roman unit that had vanished while battling the tribes north of the Wall, with Marcus’ father as second in command.
Marcus embarks on some battles and adventures, in particular a quest for the eagle, the quasi-sacred emblem of the lost legion. He travels north to the Wall and the wild territory beyond. Marcus has some triumphs, but not everything turns out rosy. While the plot is exciting, it comes in second to the deeply real and human characters, especially the changing relationship between the centurion and his former slave, Esca, who becomes a loyal friend.

Here is the meeting of the two, just after Marcus has bought the enslaved gladiator:

“I am Esca, of the tribe of the Brigantes, the bearers of the blue war-shield.”

“And I am – I was, a centurion of the Second Legion,” Marcus said, not knowing why he made the reply, knowing only that it had to be made. Roman and Briton faced each other in the lamplight, while the two statements seemed to hang like a challenge in the air between them.

Sutcliff’s style, as always, is measured and beautiful. The book is aimed at teenagers, who might be put off by the rather slow opening and the frequent descriptions of nature, but who have, since 1954, made the book a favorite. There is even a touch of romance.

The Ninth Legion was real, and its disappearance (about the year 120) has been the subject of much speculation, by novelists and historians. This version is entirely convincing. After my thrilling day at the Wall, I wrote a letter on hotel stationery to Rosemary Sutcliff in care of her publisher, thanking her for her part in my experience.
Posted by CLM

I have just one of her books left in the library-- it never circulates, but I have fond memories of my readers twenty years ago who loved these, and haven't been able to get rid of that last book. (The Shining Company. The circ card is signed by the step dad of one of my current students!)

Lovely review, Stephanie. I'm reading this book now for the 1954 Club and enjoying it so far. I haven't read many books by Rosemary Sutcliff, but I do love her writing.

This is a very good review. The subject sounds very interesting and is about a time I know little about. Stephanie has convinced me I need to find something by Rosemary Sutcliff to read.

Constance, I can see where you got your love of reading and enjoyment of historical fiction.

How lovely to have that trip and write to Sutcliff! I have only read her memoir Blue Remembered Hills, but I loved that.

What a super review, Stephanie. I haven't read this but have watched the film although I'm not sure how faithful that is to the book. I thought it was pretty good though. We visited Hadrian's Wall back in the 1900s. We were staying in The Lake District and I asked my husband to drive me up across The Pennines so that I could see the wall and visit Vindolanda. I can still remember what a wonderful day that was.

Wonderful, thank you for sharing your memories and your thoughts about the book. Rosemary Sutcliff is a literary treasure who should be better known. So much better than a lot of what passes for historical fiction these days.

The film is not very faithful to the book, but I enjoyed both.

Thanks for the guest review, and what a fascinating experience! I read this book at school and can't remember much about it apart from loving it. Maybe I should revisit!

One of my favourites! I reread this a few years ago and have been on a kick of rereading Sutcliff ever since (thanks in large part to the beautiful reprints Slightly Foxed has been releasing).

I heard The Eagle of the Ninth as a play on Children's Hour. I was completely captivated, waiting eagerly for the next episode.
Years later I came across a copy of the book and bought it.
I also travelled to Hadrian's Wall, and stayed in a youth hostel and explored the area.
The book had a big impact on me, and I think my love of history stemmed from it.

This is one of my favourites, I'm so glad that you enjoyed it too. I've just got back from my latest trip to Hadrian's Wall, we visited Vindolanda and Birdoswald, but I was reading a Roman Britain book by Henry Treece, he's not quite in the same class.