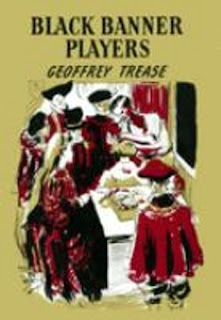 Description: Bill Melbury and his friend Tim go to a grammar school that is too old-fashioned to allow the nearby girls’ high school, attended by Bill’s sister Sue and her friend Penny Morchard, to participate in its drama productions. Their school’s performance of The Merchant of  Venice has some unintentionally funny moments as a result.  Penny sees an opportunity for a coed drama group that could provide entertainment to rural communities in the Lake District that never get to see live theatre, so over the Christmas holidays, the Black Banner Players are formed. In one village, the four encounter an elderly couple with a theatrical background and grow friendly when they are unexpectedly stranded by bad weather.  Recognizing their new friends are hard up in retirement, Bill and Tim examine some mysterious documents from their ancient cottage, hoping to discover something of value.  The four friends, along with other classmates, have fun acting or supporting the Players in other ways; not forgotten are Bill’s ambition of becoming a writer and Penny’s desire to act, despite a bad leg she thinks will impede a career in theatre.

My Impression: Geoffrey Trease’s prolific writing career extended from 1934 until shortly before his death in 1998, producing 113 books.  Best known for his juvenile historical fiction – of which the best known is Cue for Treason, an Elizabethan adventure, the Bannermere books were written as a contemporary series that would highlight the activities of down to earth young people who did not attend boarding school:

New departures were made, however, aimed at finding a voice for day school life.  Again Geoffrey Trease was an innovative figure.  His contribution was the series of ‘Bannermere’ stories, beginning with No Boats on Bannermere (1949), which follow the fortunes of a group of school friends growing up in the Lake District.  They are a small and inadvertent document of social history, and they pushed the school story into modern times: no mean achievement.

You could compare these books to Arthur Ransome's Swallows & Amazons (of which I am a fan) but there is more family involvement and the children are older and, dare I say, more interesting. In the first of the five-book series, Bill and Sue, and their mother, who is divorced, moved to a small cottage in the Lake District.  Mrs. Melbury doesn’t seem to work but she only rarely gets child support from her ex-husband, now in Canada; sometimes they provide tea to hikers. Unlike most teens, Bill is very conscious of his family’s precarious finances. It is particularly noticeable when the Players start performing in rural communities and the foursome has to ferry their props on the bus because the only other option is a bicycle and they cannot afford taxis.

Obviously, these charming books were written a long time ago and part of their appeal is that the four friends have enormous freedom to explore and generate their own fun at little cost.   In contrast, modern children a) would have at least someone’s parent who could drive the theatre necessities to their destination and b) would not be allowed to cycle miles and miles in the dark. Neither the Melburys nor anyone else owns a car, except the headmistress at the girls’ progressive school, Miss Florey, one of many appealing characters in this series, but they all survive nicely. There is clearly autobiographical detail in Bill in his yearning to become a writer and an incident in the story where he is almost lured into an expensive self-publishing scheme is part of the Trease family history, according to the author’s daughter Jocelyn, who provided some interesting information about her father in the Foreword and to whom the book is dedicated.  British writer Farah Mendlesohn is writing about a book about Trease, which I eagerly anticipate.

Source: Personal copy.  It’s possible only the first book in the series was published in the US so it took many years to accumulate all five. Thanks to Ann and Clarissa at Girls Gone By for having brought the books back into print.  This seemed like an excellent choice for Reading the Theatre Month at Lory’s Entering the Enchanted Castle.  Bill has always been interested in writing and Penny in the stage but in this book they both get closer to their dream.
Posted by CLM

These sound interesting! I'm trying to imagine how a child back then would have had a "bad leg."

She fell off a ladder at her father's bookstore and I think it healed wrong. In modern times, I am sure fairly easily repaired with more surgery but although she is usually able to bicycle and keep up on hikes, there is discussion that it would be noticeable on stage. In this book, they mostly perform melodramas and she wears long skirts to minimize how noticeable it is.

This series sounds good. I like the Swallows and Amazons books so I think I would enjoy these ones. If I've ever read anything by Trease it must have been as a child in the dim distant past.

This looks adorable. Come to think of it, I *have* only ever read children's books about boarding schools or going to the village for vacation (mostly Enid Blyton's books), never a perspective of other kids who had a different schooling, with theatre thrown in. Very interesting, and thanks for spotlighting this.
~ Lex (lexlingua.co)

I have liked his historical books and this sounds wonderful, I'm going to see if I can get hold of the series. Sound a bit like the later Blue Door books by Pamela Brown, actually.

Oh and a quick extra point - although GGB did republish the whole series they are out of print with no plans to reprint, to save other people downloading the All Authors Every Published PDFs and searching them!

LyzzyBee, probably the best way to find them is from the library or GillBilski.com (one of mine disappeared in a move and she found me a GGB reprint). You could try the first one before you invest a lot of money.

Although I read and reread Swallows & Amazons as a child, I like this series more. There is a humor that is entirely missing from Ransome (after the initial telegram from Captain Walker).

Katrina, when used bookstores reopen, you will find some discarded Trease you can collect for your granddaughter.

Lex, I didn't notice when I read it as a child that the mother was divorced but books that mention Trease point out how bold that was of him. During this reread, I wondered what on earth they are living on - the cottage was inherited and I guess no school fees but all they have are some hens and an occasional tourist showing up for tea! Of course, I always liked stories of hard up families. More fun than in real life!

This does sound like an interesting read. I remember in my youth (before high school) when I went out and did a lot of things on my own and that would definitely not happen now.