Six Degrees of Separation - from Phosphorescence to Light a Single Candle

It’s time for #6degrees, inspired by Kate at Books Are My Favourite and Best. We all start at the same place, add six books, and see where we end up.   This month’s starting point is a book Kate really liked, Phosphorescence by an Australian writer Julia Baird, which has a gorgeous cover but has not yet been published in the US.  However, it did make me contemplate different meanings of the word light, which made me think about my favorite author, Elswyth Thane. 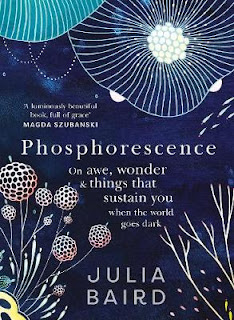 Fourth in the beloved Williamsburg Novels by Elswyth Thane, The Light Heart (1947) doesn’t refer so much to the heroine Phoebe as to her beautiful friend Rosalind, whose mother bullies her into a loveless marriage with a prosperous German, nearly extinguishing her light. 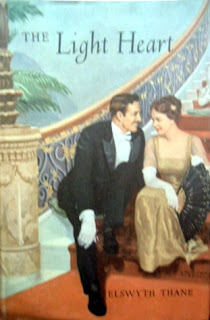 Rosalind’s husband initially is charmed by his English rose but she becomes a liability as his ambitions rise and he angles for political power in Germany and his son becomes a villainous Nazi like the bad guy in my second book, All the Light We Cannot See by Anthony Doerr (2014), Sergeant Major Reinhold von Rumpel.  I read it like many others but there are a lot of WWII books I prefer.

In contrast to the suffering and destruction that goes on in France and Germany, The Light Years by Elizabeth Jane Howard (1990), first in a highly regarded five book series (nicely packaged too), also takes place against the backdrop of WWII but depicts a family at home in England, far from the dangers of war.  It’s a little like Upstairs Downstairs. 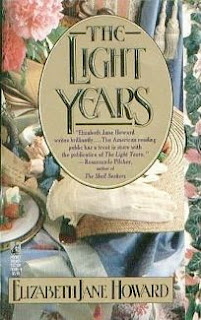 All these sad books about war and bitter Germans were threatening my end-of-work-week good mood!  For my fourth book, I picked a short but buoyant romance by Christina Jones called Dancing in the Moonlight (1999).  I don't think she has written anything new lately but I enjoy her light romantic fiction.  This novella is part of a chick-lit series that takes place in the imaginary English town of Milton St John, where everyone is obsessed with horse racing. 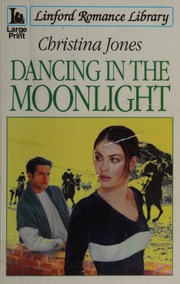 An obsession can lead to tragedy.  Reviewers say Jodi Picoult puts a human face on hot button issues in her novels, and A Spark of Light (2018) is about all the people whose lives intersect during a shooting and hostage situation at a reproductive rights clinic.  I didn't like it as much as some of her early books but it was hard to put down. 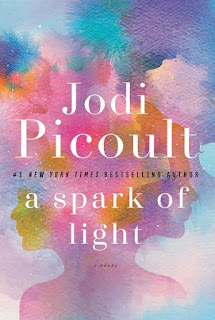 A current issue in the news is the effect of the pandemic on the disabled, especially children who have been unable to attend school in person.  If you were a reader of my generation in the US, chances are you read this book about a girl who loses her vision and goes to a special school for the blind,  Light a Single Candle by Beverly Butler (1962).  I wept with Cathy when her eye doctor told her she was going blind and she had to go to a special boarding school for the blind (shades of Mary Ingalls) and rejoiced when she got Trudy, a seeing-eye dog who helped her regain control of her life.  Did you read this book? 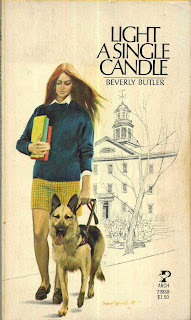 See how I linked intrepid blind heroines, World War II, a hostage crisis, and a female jockey looking for love!  Next month (April 3, 2021), we’ll start with Booker winner Shuggie Bain.  It has received fabulous reviews but a novel of addiction and despair is definitely not my thing!  Did you play #6Degrees this month?  If so, please share your link.

PS – I am not sure Elswyth Thane is my absolute favorite author but it seemed right when I wrote that sentence.  Ask me again tomorrow and I might have a different answer!

A good idea to concentrate on the 'light' aspect of the first book and it made for very interesting reading. Some authors I'd not heard of that I will be looking into. I have All the Light We Cannot See on my tbr pile for this year. I think it was hugely popular a couple of years ago, I always do seem to be very late to the party. LOL

I used the word light as my first link this month too, but went in a different direction after that. The only book in your chain that I've read is The Light Years, which I enjoyed - and you've reminded me that I still have the last three books in the series to read. Elswyth Thane has been recommended to me before, but I still haven't tried any of her books yet.

I enjoyed your chain immensely Constance though I don't know any of the books except for the Doerr. Correction, the blind girl with the seeing-eye dog Trudy rings a strong bell. I don't recollect the author or title but I do recollect a seeing-eye dog called Trudy. I could have read it.

I love that wedding announcement. My, she'd written a book and dedicated it to him 3 years before their marriage. ld' love to know her story.

Well, the last chain I read ended up with books about mass murderers so I think I prefer your chain with people just going blind!

I always enjoy reading everyone's 6 degree posts. The only book in your set is All the Light We Cannot See, which I read twice and even visited St Malo I loved it so much. The cover of The Light Years reminds me of the cover of The Shell Seekers, which I am planning to reread fairly soon. I think I need to check out Elswyth Thane!

I love that Beverly Butler book!

This is the first time I have read one of your Six Degrees chains. I don't do these myself but I love reading what others do, including you!

The news clipping was lovely!
I didn't participate in #6Degrees this month, going through a bit of reading/ blogging slump lately. But I liked your chain a lot. This part made me laugh a lot too: "All these sad books about war and bitter Germans were threatening my end-of-work-week good mood!" Haha. And the last book I've never read, but I've read Helen Keller's story and that was painful (although inspiring too) enough.
~ Lex (lexlingua.co)

This is a very nice chain and I liked how you linked the books. I did not feel up to a 6 degrees post this month but I do want to get back in the habit somehow. I have only read The Light Years. I like the cover on Light a Single Candle.